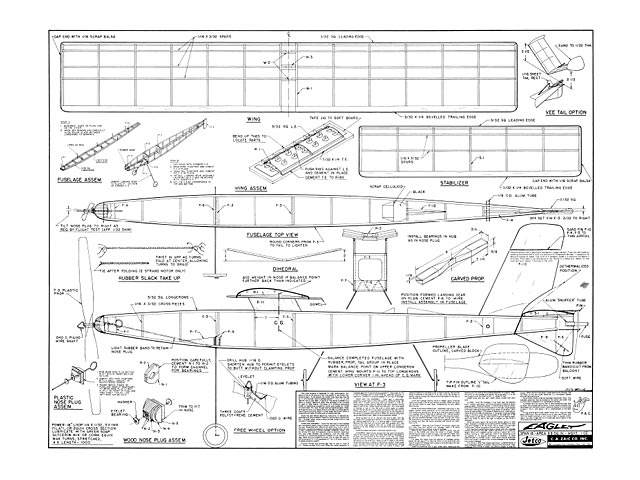 Quote: "This little airplane is designed for high performance. Evidence of this is its record of four first places in the Embryo Endurance event. To be eligible the model must have less than 50 sq in of wing area, have a fuselage section 1-1/4 x 1-1/2 x 3, and take off from a card table. A bonus of five points is added for a cabin or cockpit. Maximum flight time recorded is two minutes for each of three flights.

The result is a miniature endurance model for developing competition skills, and a great fun model for small fields. For, even though soaring flights are easily made, winding the motor to a lesser amount provides countless gentle, rise off ground circling flights in small areas like school yards or neighborhood fields on those quiet windless evenings.

Study the plan before beginning instruction to become ac-quainted with various details. Carefully remove die cut parts from the 1/16 sheet balsa, using a sharp pointed model knife to free the parts if necessary.

FUSELAGE ASSEMBLY: Cover the side view of the fuselage with transparent plastic wrap to prevent cement from adhering to the plan. Assemble both sides at the same time, one on top of the other. Locate the longerons on the plan between pins. Fit two of each crosspiece and cement between longerons. When fully dry remove from plan and separate sides by carefully slipping a thin razor blade between the longerons. Join the sides with formers F-3, positioning assembly inverted on top view of fuse-lage. Bevel and join longerons at tail, join at nose with die cut reinforcements F-4. Fit crosspieces of 1/16 x 3/32 strip. Refer to Fuselage Assembly sketch.

WING AND TAIL ASSEMBLY: Erect tabs in Jetcomatic assembly jig and tape to a flat soft wood or wallboard scrap. Set three ribs in slotted positioning tabs and cement to 3/32 sq leading edge pushed against leading edge tabs. Cement trailing edge to rear of ribs. Install remaining ribs and 1/16 x 3/32 spars in notches in tips of ribs. Be sure to allow spars to project beyond the left end rib on one panel and beyond the right end rib on the other panel, in order that the spars can be tied together at the center by gussets W-2 and W-3. When dry remove wing from jig and add bottom spar. Refer to Wing Assembly sketch..."