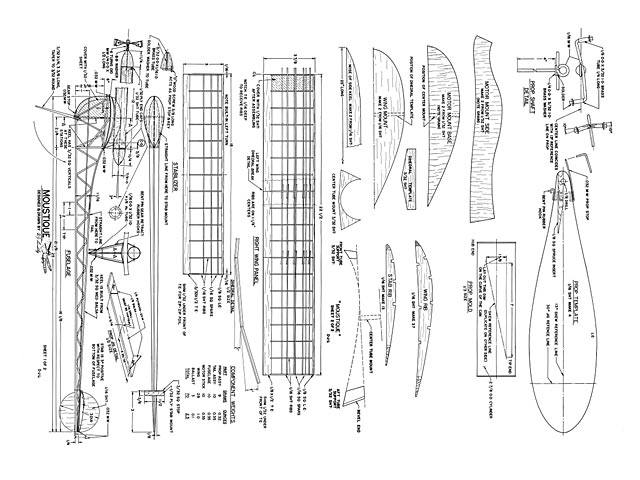 Quote: "The French Coupe d'Hiver (pronounced coop deevair) event fills a definite need in the American modeling scene. For years there has been no logical way in which a junior (or a late-starting oldster) can bridge the gap between an AJ Hornet and a Wakefield. This area was the domain of the 'C' rubber job of the prewar years. Then, during the middle '50s all rubber classes became contests to determine who could pack the most rubber into the least airplane. Sanity finally returned to Wakefield, but unfortunately the event had already developed an air of mysticism which snowed the junior. Unlimited rubber, on the other hand, continued on its merry big motor, little airplane way.

There are five basic rules to be obeyed in Coupe d'Hiver competition:

My first model in this class was a nostalgic attempt to make a 'C' rubber job to the new rules. The planform was conventional and so were its capabilities. Experimentation with power-propeller combinations led to the conclusion that the best solution for the cold, calm air conditions of this event was an overgrown indoor model. Motor runs of over a minute were quite feasible with proper rubber arrangement, but ROG became a bit hairy.

A return trip to the drawing board resulted in the model shown here. The motor run is approximately 1:10 with 660 turns in four strands of 6 mm. Pirelli. This results in an altitude of about 100 ft. when the prop folds. From there a fifty second glide is not difficult at 1.6 oz./100 sq. ins. wing loading. Take-off is simplified by raising the thrust line to keep the surfaces at a reasonable angle of attack while clearing a large prop. The high thrust line also helps keep the nose from rising too high on the initial thrust surge. Another effect of the high line is to allow the use of a sheet balsa tube which can be added to wing center section. fairings, fuselage, etc, to produce the required cross section area at minimum expense in terms of airframe. The model is unusually large (175 sq in wing). It was made this size to produce a model with low flying speed and simplify the low power take-off problem.

Enough theory already! How did it all work out? Well, the model has been flown through a full summer season in Chicago weather (second only to Olathe, Kansas in terms of wind). The extremely low moment of inertia in pitch combined with long moment arm makes the model very stable in wind. Take-offs into the wind are complicated only by the ability of the flyer to avoid being hit as the model backs up. Average evening flight time seems to be about 2 minutes, windy or calm.

Construction is fairly straightforward if the builder recognizes that there is a weight problem and either carefully selects wood in the 8-12 lb per cu ft class or buys Sig's pre-graded Contest Balsa. A table of finished part weights is shown on the plan and should be used if you want maximum performance.

Before starting construction, I think a few words are in order about the relationship between designer and builder..." 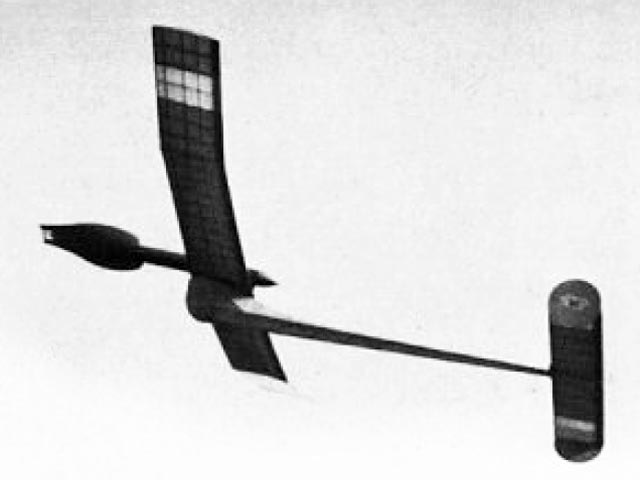