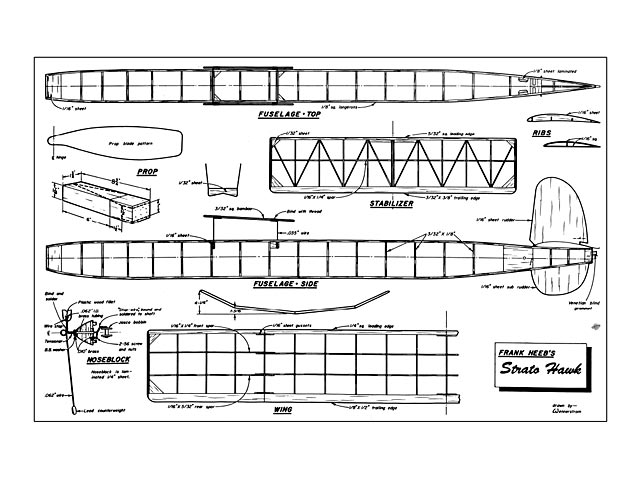 Quote: "This Nationals-winning limited class rubber-powered model is eminently suited to anyone who has yet to build this type of ship. Stratohawk, by Frank Heeb.

The Stratohawk is the present result of a series of seven models of similar size and configuration and was designed specifically for the limited rubber class. This model won first at the 1953 Nats with a total time of 13-1/2 minutes. The 1952 model which won first at Los Alamitos was of Wakefield size and had a diamond fuselage, these being the only differences between the models. The model is named after my club, the Springfield, Ohio, Stratohawks. No fabulous performance claims can be made, but the model is capable of doing three minutes in dead air with a one minute prop run.

The original has an airframe weight of 3 oz plus 2 oz of rubber and was built in the week preceding the Nationals. Through lack of time, no attempt was made to build a super-light airplane, but it is believed that an airframe weight of 2-1/2 oz could easily be achieved by proper selection of wood and skimping here and there on wood size. This would give a motor weight 50 per cent of total weight, a good figure anywhere. It is my belief that no matter how heavy the airframe may turn out, only enough rubber should be used to make the total weight 'requirement. It is better to have to live with a light under-powered airplane with a good glide than a heavy one with a lot of rubber and a high sinking speed.

A note about the design theory: The wing is raised above the fuselage for three reasons. First, the parasole effect is an aid to stability, especially under high power; secondly, the wing is above the fuselage turbulence and the lift of the center section is not lost; and thirdly, the trapeze provides a more stable wing mount than a pylon or rubberbands around the fuselage. Of course, this high wing does have the drawback of required additional downthrust, but no harmful results of this have been noted. The large diameter prop with generous area and high pitch is utilized to get a fairly long motor run out of a long motor with a small number of strands.

The construction is simple and straight-forward; the only time consuming detail is the prop and nose block assembly. Also the airplane is strong and capable of good performance in windy and gusty weather conditions.

The longerons are of hard balsa and the cross braces are medium hard. The motor is held at the rear by a piece of 5/32 OD aluminum tubing. The 1/8 sheet fill-ins at the rear strengthen this mounting and help keep the motor centered. The wire wing mounts are bent to shape, and 1/32 sheet balsa is filled in as shown. Note that the center of the wire is raised to allow extra clearance for the motor. Then gauze bandage is cemented to the sheet, wrapped around the wire, and cemented thoroughly. This assembly is sandwiched between 1/16 sheet formers of the same shape and cemented in the fuselage. The 3/32 sq bamboo runners are bound with thread and cemented to the mounts. Both of these cementing operations should be repeated two or three times to make good joints between the wires and wood. The Venetian blind grommet and the wire hooks to hold the tail also should be well cemented. A 1/32 dia hole is drilled in the grommet for a pin to hold the fuse so that it can't fall out or be pulled out during lighting.

The wing construction is self-explanatory from the plans. Use medium hard stringy balsa for the leading and trailing edges and spars, medium quarter grain sheet for the ribs, soft sheet for the tips.

The stabilizer features split-rib construction which results in a light, strong, and warp-resistant surface. Make a sheet metal template for the upper camber. Slice the ribs from a 2 in wide sheet of 1/16 medium balsa of the exact length as the required chord between the leading and trailing edges. The lower ribs are cemented in place first, then the upper ribs are added. With the stabilizer still pinned to the plan board, add the spar and cement in place. This will insure a flat stab. Note that two upper ribs 1/16 in. apart and a 1/16 x 3/16 lower rib are at the center to provide a mount for the fin. The fins are 1/16 medium soft quarter-grained balsa.

This is the most important part of the airplane. Lay out the prop block as shown and saw on the dash lines with a jig or band saw. Try to lay out the prop from a medium soft balsa block so that most of the blade will be quarter-grained when carved. Drill the hinge hole 1 in from the center and at a slight angle (looking from front view) so that the blade will fold flat against the fuselage. Starting with the undercamber first, try to carve a true airfoil section similar to the NACA 6409 wing section. The maximum thickness is 1/8 in and the maximum undercamber is the same..." 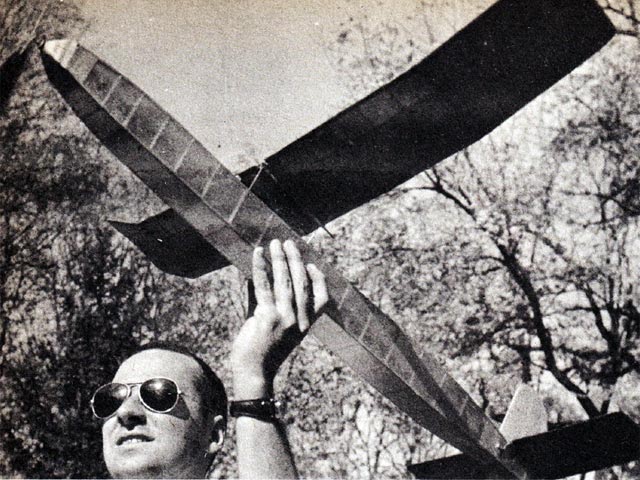