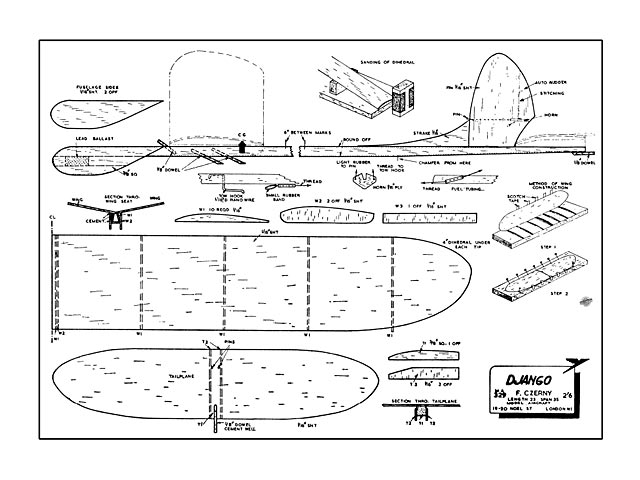 Note the Angular Angel (oz13066) and Django designs appeared together in the same article, in May 1960.

Quote: "Django. THE trouble with most so called beginner's models is that they are too complicated, and take too long to construct. Django is so simple that it can be built in a couple of evenings. Despite its simplicity, it is an excellent flier, and building costs are low.

Wing: Cut to wing ribs (W1) and spot cement these lightly to the building board (see sketch). Next cut and sand the wing panels; only the right vring is shown on the plans. Slightly dampen the forward half of the tipper surface to produce the correct section and cement the panels to the ribs with a rolling motion. Secure the whole assembly with pins and Scotch tape. After drying, remove the panels with a sharp knife, separate them in the middle and sand the centre joint to achieve the correct dihedral, as shown in the third sketch. Now cement the wing halves together and fix the wing seat. Ribs W2 are now fitted; note that they are parallel and trued up to the wing seat. Construct the wing seating accurately, for the squareness of the model depends upon it.

Tailplane Check for squareness. Cement the tailplane panel to the top side of it, and cement the seat-ribs (T2) in place. Push two ordinary pins through the tailplane as hold-downs, bend them over and pull them back flush with the underside of the seat.

Fuselage Cut a 28 in length of 3/8 sq for the fuselage boom, and a 3 in length for the tailplane rib. The rest of the 3 ft length is used for the fuselage-nose, with the nose side panels from 1/16 sheet. Cement the appropriate parts together, and fit r oz. of lead in the space provided. Taper the end of the boom as shown in the side view and round off the corners, except where the wing and tail 'sit.' The fin and strake are then cemented to the fuselage, together with the tailplane holding down dowel. The wing holding down dowel and the two hooks can now be fixed in place - use great care in order to avoid splitting the fuselage.

Flying: Assemble the model and balance at the point shown on the plan. Test glide from shoulder height and adjust for a flat glide, by packing up the LE or TE of the tailplane or wing. Excessive turn should be corrected by warping the rudder. When trimmed the model may be tow or catapult launched.

For a catapult, use a loop of 1/4 in flat rubber about 10 to 15 ft long and a length of fishing line about 30 yd long. Push a spike into the ground, and fix the rubber band to it. Attach the fishing line to the rubber band and fit a wire ring to the other end. Launch by hooking the model to the line and gently pulling back. You may also, of course, tow launch the model.

If Django veers to one side, then release it, banked to the other side. The tow will not be exactly straight but rather in the form of a gentle 'S.' In windy weather use the forward hook, in calm the rear, When you have gained some experience, cut the dowel tow-hooks away, and instal the auto rudder with the wire hook. This will enable you to achieve a straight tow and circling flight." 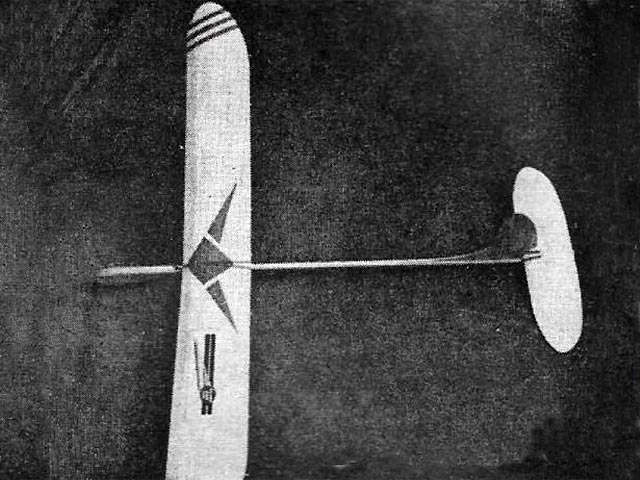