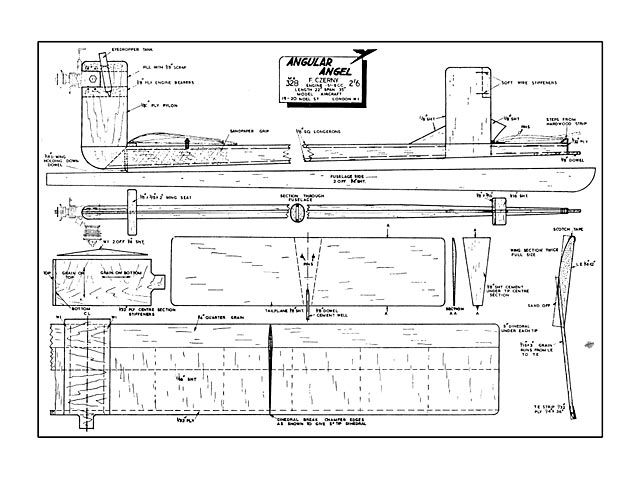 Note the Angular Angel and Django (oz13067) designs appeared together in the same article, in May 1960.

Angular Angel. HERE is a simple contest F/F model of unusual, but very practical layout. The construction is rather unorthodox, yet it is easy to build, warp-proof, robust and easy to trim and fly. You can use the model for open or FAI contests, although for the latter it must be ballasted.

Wing: This is the most important part - once you have finished it, the model falls together almost by itself. Start by sanding all the balsa sheet you will be using, then sand the leading edge block and ply trailing edge to a wedge-shape. Cement the 1/16 sheet on to this wedge-shaped nose with contact cement or PVA white glue. This sheet must be prepared beforehand, because the grain has to run chordwise. For this cut 3 in long pieces from 3 in or 4 in sheet, cement them edge to edge, and then glue the ply trailing edge in position.

After the whole assembly has dried, sand the upper side of the leading edge to an airfoil shape anti place a strip of Scotch tape around the LE for strengthening and to prevent splitting. Now cut off the outer panels and sand the ends to the correct angle to allow for a neat dihedral joint. Double cement the outer and inner panels together. In case of a bad crash, this cement joint will break and the tips come off without doing any harm, it is then a simple job to cement them back in place.

Fix the wing-seat parts in position, do not spare the cement, and cement a strip of sandpaper to the frost of the wing-seat. Treat the wing with banana oil or similar non-shrinking dope, thin this down to the consistency of water and give three coats as quickly as possible, so that it soaks well into the wood. Lightly sand the wing after the dope has dried, in order to get a smooth finish.

Tailplane: Cut out and sand to an airfoil shape, lightly dampen the panel on the upper side and cement the parts together. As hold-downs, use ordinary pins, which are pushed through, bent over and pulled back flush with the underside. A piece of dowel is used for the rear hold-down. Give the tail only two coats of dope.

Fuselage: Cut the pylon from 1/8 ply. Also cut the other necessary parts and cement everything together. Cement the engine bearers to the 1/8 ply pylon and fill the space between these with 1/8 balsa. Drill the motor-mounting holes for the motor you are going to use. Fix the wing and tail seating strips to the fuselage and the stair-like incidence piece (extreme rear). Round off all the fuselage corners to the section shown and cement sandpaper to the fuselage sides, then dope as for the wing and finally give one coat of fuel proofer.

Flying: Slide the wing backwards or forwards until the model balances at the point shown on the plan, then key the wing and tail with split dowels. Now hand-launch as usual and trim for a flat glide.

The first powered flights should be made on full power but with the prop on backwards. The model should fly almost straight with only a very slight turn which should be in the same direction, both under power and on the glide. Correct the power-on turn by altering the thrustline. The model needs a moderate throw on launching to achieve full flying speed, or else it will sink to the ground before climbing away. The climb is at an angle of 45° and very fast.

Always use a dethermaliser fuse in the rear tailplane rubber baud when flying under power, otherwise you may easily loose your Angular Angel." 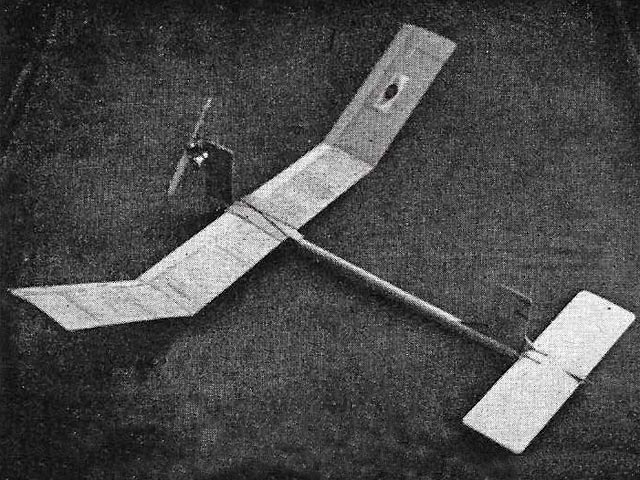