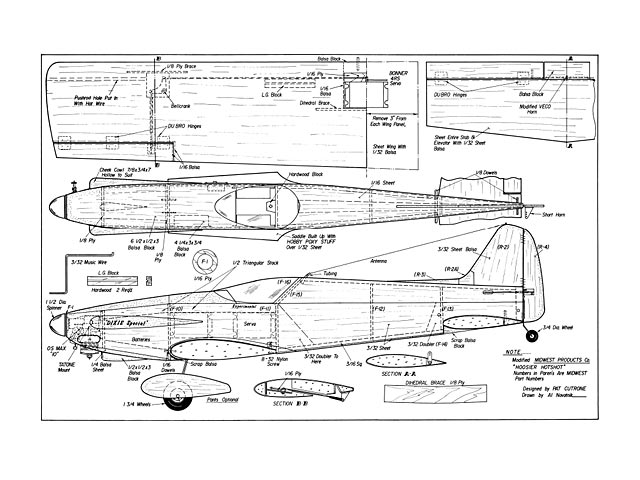 Quote: "First of the little Quarter Midget pylon racers to appear in these pages is a happy little machine that can be made from Midwest's Hoosier Hot-Shot (oz8520). Dixie Special, by Dixie Cutrone.

Why not? That's what I found myself thinking after reading the Field and Bench article in the January '68 issue of MAN in which Frank Schwartz made his full house Testor's Skyhawk sound like a fun machine and a real change of pace.

My Skyhawk was pulled around by an OS Max 15 and sported built-in ailerons. As I expected, this little plane flew up a storm and provided much fun before the wing flexed just a little too much and presto! Two halves. But that's another story.

Really bitten by the small multi bug, I decided to build another small ship. I looked over the smaller kits available and decided on Midwest Products' Hoosier Hot-Shot (oz8520) with modifications. The modifications were few. The major one was making a low wing airplane from the shoulder wing design.

I felt that this type of ship should be ideal for Guarter Midget pylon racing with an OS Max 10 for power, which also happens to be 1/4 the engine displacement of its larger brothers. I used the Bonner 4 RS equipment in my Special and it fits very well, (see photo) as will the other new small systems being offered. I also inverted the engine in order not to distract from the smooth lines of the cowl, cockpit, and turtle deck. A Tatone mount, a Max 10, a few evenings work, and you're ready for some real action.

Now down to the modifications and constructions. The first thing needed is the Hoosier Hotshot kit. Without this, you're lost.

WING: First take the wing and cut it in half. Remove three inches from the inboard side of each panel. The slot for the dihedral brace should now be cut out, using a sharp knife or the hot wire method. Cut the 1/8 plywood dihedral brace and epoxy it in place at the same time that you epoxy the wing panels together. When dry, cut out the section that will house the aileron servo board. This should be approx-mately 2-5/8 in wide and extend back to the dihedral brace or made to suit your particular servo. Remove the whole piece of foam. Install the 1/16 plywood. floor servo board and 1/16" balsa framing, again using epoxy for strength. Soft balsa can replace the foam under the servo board, sanding it to the airfoil.

The ailerons are next to be cut out. These can also be cut with a sharp knife, X-Acto saw or hot wire. After removal, cut an additional 1/16 from the wing for the 1/16 balsa sheeting. Also, cut the angle on the aileron and sheet the butt end with 1/16 balsa as shown. The under side of the aileron should have a small block of 1/16 plywood cemented in place to accept screws for the aileron horns. Mark off the position of the bellcranks and remove the foam in this section. Also cut a slot for the wing brace as shown on the plans. The extra strength that this piece adds is needed to make up for all the foam that has been removed in this section. Epoxy the 1/16 plywood bellcrank mounts in place and install the bellcranks. Now take a long piece of piano wire and heat the end. You can now push the hot wire the length of the wing for push rod clearance. Also from the bellcrank to the aileron (section BB).

The wing is now ready to be covered. Lightly sand of all the little bumps or whatever imperfections you find and sheet the entire wing and ailerons with 1/32 balsa. I used 3M 77 cement for this and it works very well. After the access hole for the nylon hold down screw is put in, the wing can be put aside, while the elevator and stab assembly is built.

Remove that section of the stab to be used for the elevator. The center section as shown on the plan is carved from balsa with the elevator horn installed. Sheet the edge of the elevator and stab with 1/16 sheet and after slight sanding of the foam core, sheet the entire stab and elevator with 1/32 sheet balsa. Again using 3M 77 cement..." 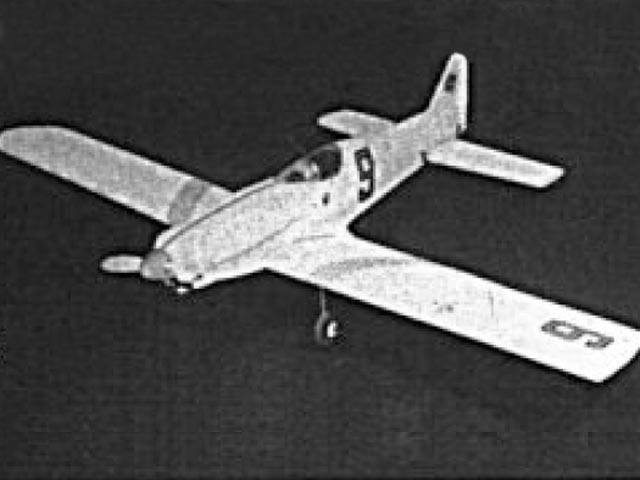