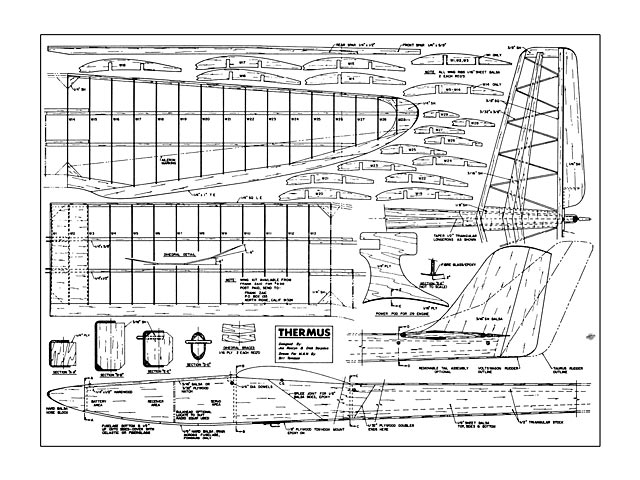 Quote: "The long famous Thermic wing shape, trademark of JASCO and later JETCO, makes its come-back on a top-notch soaring glider that has shown the way to several of Europe's best. Termus, by Dick Sarpolus and Joe Roslyn.

We'd like to tell you how two radio modelers got involved with sailplanes about a year ago and ended up designing a high performance soarer - our Thermus. Lately more and more people have been getting away from the standard multi stunters - note the World War I models, scale models, Formula Pylon Racers, tailplanes, etc, that are seen more frequently. We had both spent some time with free flight, before control line, and before R/C, so soaring looked like a good activity to try for a change of pace.

We began by looking for a suitable model. Keeping the cost down, Joe found a Thermic 100 (oz1573) kit at our local hobby dealer's, obviously well seasoned on his shelf. Dick found a 15 year old Class C free flight wing and tail there also. After some negotiating, our dealer was convinced to part with these priceless treasures. Joe built the Thermic, Dick made an original fuselage for the F/F wing and tail, and our Club had its first two R/C soarers. These models were flown at various times from a hi-start, with .09 engines mounted on the nose, and as slope soarers. The more we flew, the more we learned and the better we liked it.

We both like competition, but without having seen any other R/C sailplanes, we had no standard of comparison; just how good was the Thermic 100 wing? Could we compete successfully with it? To come up with a better and more modern design, a new fuselage was worked up, just big enough for the radio gear. An old Taurus tail, left over from two crashes, was handy and looked right, so we used it. Wing incidence was changed because of the symmetrical tail; we wanted a faster glide anyway. We ended up with a modern sailplane at almost no cost. Joe and the first Thermus attended the DCRC soaring meet in early summer 1968. The plane seemed to perform on a par with the other models but radio trouble ended Joe's flying in the eighth round, so the design was still unproven.

We both entered the DCRC Forth of July meet in July 1968, Joe with the Termus and Dick with his ex-F/F bomb, since his Thermus was not ready. At the end of the first day's flying, Dick had the only ten minute max flight and was in first place. There was much rejoicing Saturday night and a lot of educational discussion with soaring enthusiasts Good, McEntee, Hill, Northrop, and Rankin. Sunday's flying was even better - Joe's Thermus hit for two ten minute max flights and his second flight found the strongest thermal he had ever been in. Joe won the meet and Dick finished in fifth place. We were now hooked on soaring.

Looking at the expensive sailplane kits available, the typical construction of capstrips, planked leading and trailing edges, etc., our Thermus is simple and faster to build at a much lower cost. Obviously it can be a top competitor. Good news is that Frank Zaic is offering Thermic 100 wing kits for sale (Frank Zaic, Box 135, Northridge, Calif 91324. Wing and stab kit is $8.00 plus $1.00 for postage.) This easy to build wing kit will enable you to get a Thermus together quickly. Our name of course comes from using the Thermic 100 wing with the Taurus tail. You might try telling your friends it's a modified Taurus.

Don't be afraid to experiment with the design - if you have bigger radio gear, make the fuselage a little fatter. Have another old tail assembly available? Use it. An .09 in the nose will pull it up fine, if you want to use an engine. We like the power pod shown on the plans. We use an .09 Cox Medallion with a one ounce tank. Strapping the power pod on over the wing doesn't change the trim and doesn't seem to affect the glide. We have slope soared the Thermus - not too much, as slopes are scarce in New Jersey - and it seems to be right at home, with some down trim for better penetration.

Dick's wing was built in two halves for easier transporting - they are joined by an 1/8 inch aluminum tongue sliding into plywood boxes. Both of our planes have added 1/4 inch spruce spars on the top surface of the wind center panels. Dick's wing did not have the top spar at first and the wing broke in half at about 800 feet altitude. The resulting dive was interesting to say the least! With the top spar and spruce spars used on the bottom, no problems have came up, even though we have many times looped and spiral dived the models. You need a strong wing: these planes are not particularly light, they fly fast and can put a lot of stress on the wing. A strong hi-start can really strain the wing too.

Start construction by splicing fuselage sides together. Contact cement is handy for attaching the 1/32 inch plywood doublers - make sure you have a right and left side. One model used 1/16 inch plywood doublers with lots of 1/2 inch lightening holes. The 1/2 inch triangular stock is glued to the sides (we use Tite-bond) . Trim the triangular stock at the rear so the sides can be pulled together. Install the two bulkheads at front and back of the wing opening, pull rear sides together and pull front together for the nose former..." 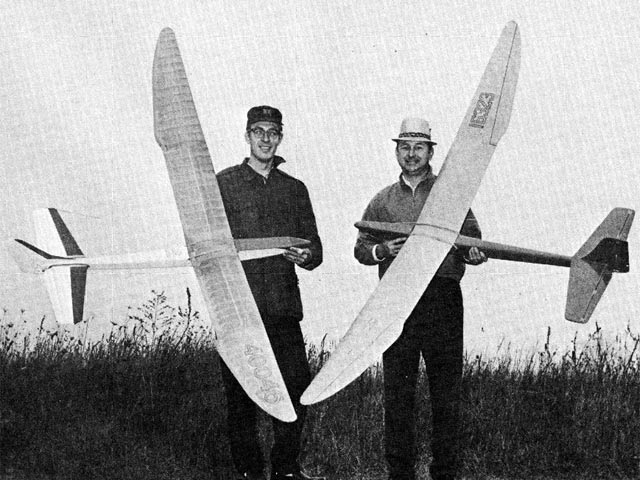