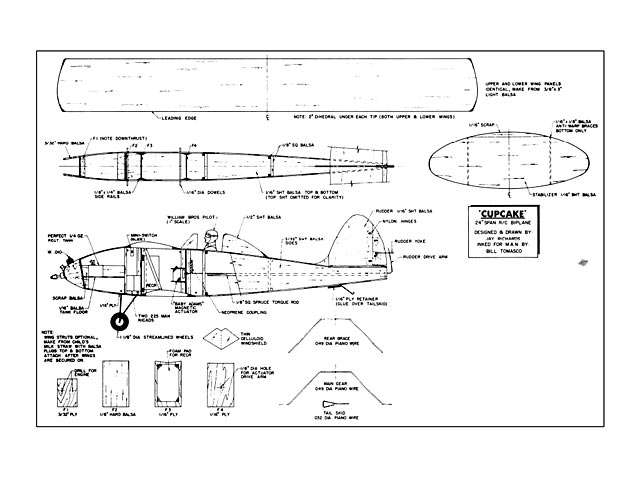 Quote: "This cute little back yard bipe couldn't have been better named. In spite of its small size, flights are slow and realistic. Designed for single channel, with mini propo, who knows? Cupcake Single Channel Biplane, by Jay Richards.

Small radio control designs have always had a special appeal to this writer. The Cupcake is a 24 inch wingspan, all-balsa biplane, powered by a Cox TD .01 and using two 225-mah nicad discs, a relayless superhet receiver, an add-on switcher, and a Baby Adams magnetic actuator for pulse rudder control. The biplane was designed for R/C flying in small areas such as schoolyards. With the .01 engine, it performs this task nicely, giving slow, realistic flights with scale-like effects. For more zip, an .02 can be fitted. The little bipe looks real good wheeling overhead and spectator response is invariably favorable.

The model is simple and rugged and can be constructed in only a few evenings. Both wings are carved from a single sheet of light 3/8 by 3 by 48 inch balsa. All-up weight (.01 version) with radio gear is 8-1/2 ounces. This bipe is very forgiving in maneuvers. Penetration with the .01 is moderate and the non-expert should have no trouble 'staying ahead' of the model while flying on small fields. Cupcake is inherently stable which would permit use of escapements. If interference is no problem in your area, a relayless superregen can be used. Relay-type receivers are not recommended for Cupcake because of the added weight.

WINGS: Construction of Cupcake is started with the wings, using a single sheet of light (approximately 2-3/4 ounces in weight) firm, 3/8 by 3 by 48 balsa. We calculated that, with carving and sanding, the completed wings (upper and lower) would total 2 ounces, or 1 ounce per wing, a not too unfavorable. In addition, the solid balsa construction has the advantages of being quick and easy to build, with a rugged wing structure resulting. (If 3 by 48 is unavailable, two 3 by 36 sheets will be needed.

Cut 48 inch plank exactly in half to form the two identical 24 inch span wings, cut tip outlines, and carve to airfoil shape (as you would a hand-launched glider). Use successive sandings with rough, medium, and fine sandpaper to smooth airfoil shape and tips. Cut "V" groove for dihedral angle at center section of each wing, and glue to form dihedral angle (2 inches under each wingtip). Place one wing half flat and weight it down, block up other wing half 4 inches at tip and repeat process for second wing. After wings have dried, reinforce each wing center joint by cementing gauze (or nylon) strip, top and bottom, and apply a light second coat of glue over gauze.

Cement strong white thread (or Dacron fishing line) along wing leading edge, starting at midpoint of one wingtip, along entire leading edge of wing, and ending at midpoint of other tip. Repeat for other wing. This reinforcing thread will protect the wings' leading edges from minor dents and 'sawtoothing', and will prevent most flight damage from that occasional pilot error.

TAIL: Cut stabilizer and fin from 1/16 sheet. If elliptical surfaces are not your bag, simple straight-tapered outlines may be substituted. (Just be sure your stab and fin areas are equal to original areas; a slight increase is OK). Sandpaper stabilizer and fin, rounding off the leading and trailing edges. (Don't make trailing edges too thin.) Cut fin along hinge line and add nylon hinges to connect fin and rudder. Drill rudder for yoke and install same with bolt. (Use short 2/56 bolt, if available.) Glue anti-warp braces to bottom of stab. Cut small dorsal fin from 1/16 scrap, sand smooth, and cement to fin. Glue fin to top of stabilizer, checking for alignment and to ensure free rudder movement.

PERFORMANCE: This section, inserted just prior to fuselage construction, is intended to aid in selection of engine and tank. Cupcake first flew with a TeeDee .01, 4-1/4 in prop, and 1/4-ounce tank. This combination provided pleasing scale-like flights (with mod-erate penetration) of 3-1/2 to 5 minutes duration. (The oversize propeller lessened the normally piercing scream of the .01 out of consideration for homes near the schoolyard.) The .01 engine/ 1/4-ounce tank combination is recommended for the majority of users.

After a number of pleasant flying afternoons, the usual craving for more pizazz crept in - and the .01 was removed. A Cox .02 reed valve was substituted, with a passage filed between the tank shell rear edge and the mounting plate for installation of a fuel line between the .02 pickup nozzle and a 3/4-ounce Perfect rectangular tank in the fuselage. This combination gave more zip, as well as flights of 7 to 10 minutes duration! If that's too long, use a half-ounce tank with the reed valve .02, which will give even-peppier climb-outs, this being due to eliminating that over-full feeling at launch time (sorry, couldn't resist!) with the extra large tank! Of course, performance would be even jazzier with a TeeDee .02! 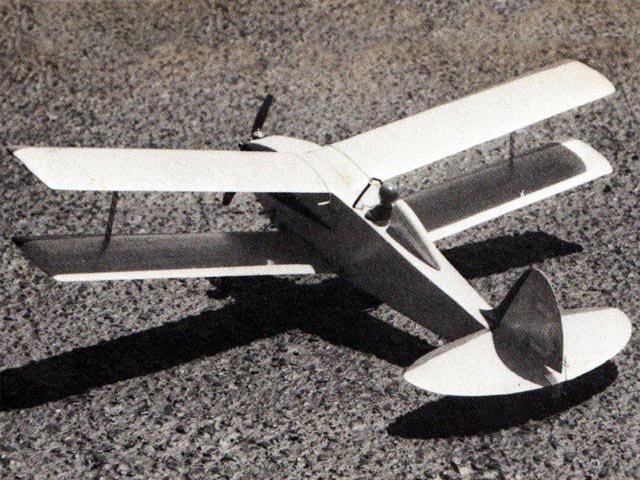