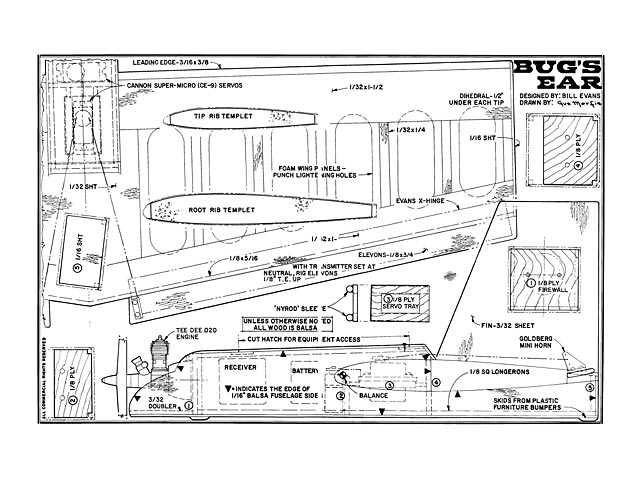 Several Sundays ago, while working in my shop and facing more projects than I could possibly finish, the thought of an .020 Simitar began to play on my mind. After pulling the just-received and long-awaited Cannon super mini-system from its carton, I began to calculate and sketch. Since I had behind me the experience of already designing 27 variations of the Simitar, it was not long before a 24 in span, 150 sq in wing took form on paper, to support the 7 oz to 11 oz ship. The fuselage lines took shape around the wing and radio components.

So, in the time between 5:00 pm and 9:00 pm, the craft took shape and was covered, and the engine (TD .020) and radio were installed. The only problem was that it was too late in the day for a test flight. As I sat back to admire the smallest R/C I had ever built, my wife Joan came in and remarked: that's as cute as a bug's ear! So, the Simitar .020 was christened the Bug's Ear.

Since this was my very first experience in actually building a model of a model, I was surprised at how quickly the little pieces went together and how easy it was to iron on a few scraps of covering.

The test flight was a cinch - the Bug's Ear left my hand easily and it performed all the maneuvers of its much larger predecessors. There were three surprises. First, due to its size, I found that it was helpful to keep it a bit closer than normal-size ships. Next, the roll rate is faster than I have ever seen. It took some practice to get one roll instead of two. Finally, when it was inverted, the tank drained and the engine quit. This was due to the tank mount being vented and filled at the top. This problem can be solved by capping the vent line after filling the tank.

Because of its small size, the Bug's Ear can be flown on a very small field (tennis court size). I have flown it on a tennis court at night with the court lights on, but I do not recommend this practice. Keeping the ship in sight while looking up into the lights is almost impossible - once was too much for me.

The final flight test was on a slope. I removed the prop, put a small plastic bag over the nose to cover the engine and gave the plane a push off the slope. It flew very well and it was a pleasure to see this miniature model dart back and forth.

CONSTRUCTION: The materials are almost too few to list. Check your scrap box for most items and proceed as follows:

Quote: "Steve, Mary, Find attached the plan and article for Bill Evan’s Bugs Ear. A flying wing for Cox .020. It was the smallest in a series of flying wings that Bill designed in the seventies and eighties. I am sure it would make a great electric small field flier using modern radios electric motors. It was published in Mar 1982 Model Airplane News. Stay safe." 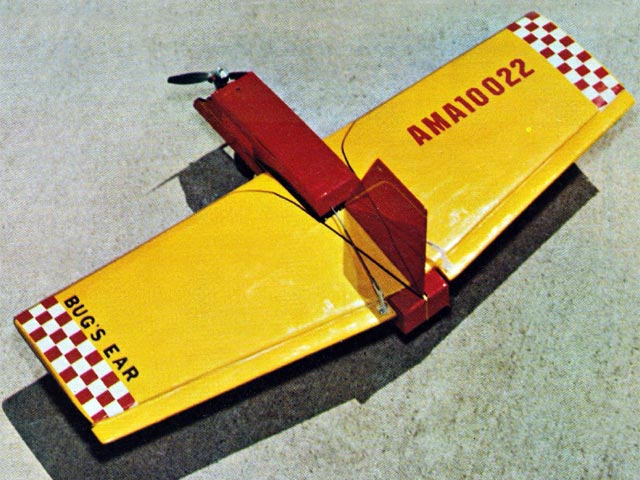