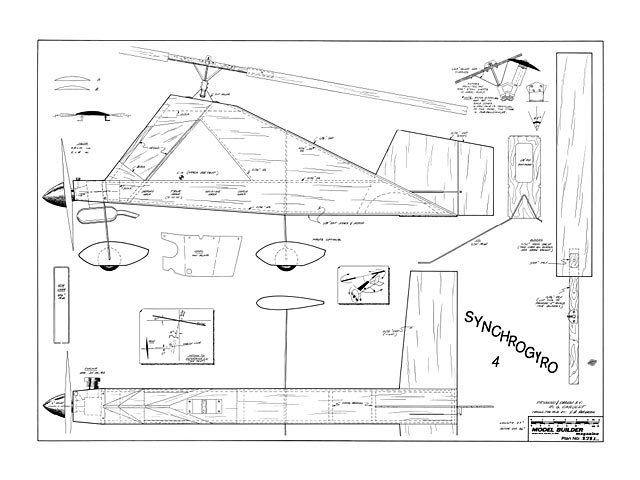 Quote: "A genuine autogyro - rather than an airplane with a full wing and a rotating ceiling fan on top that merely adds to the drag - this one's easy to build and fly, and easy on the wallet.

(Introduction: This article, because of its uniqueness, has been published almost entirely in its original form. Mr Chaulet's English is quite clear, and we have only added interpretations where we thought it might be necessary. wcn)

This new kind of flying machine has been presented briefly in Model Builder (Oct. '78). The first three Synchrogyros were more or less experimentals. This one is much more evolved, with clean lines, and easy to build. It's cheap, too. just a simple .35 engine, not Schneurle, and a 2-channel radio.

As monorotor gyros have a tendency to instability, I use two rotors turning in opposite directions, and synchronized through gears. These gears are stock Meccano items, with a 45° angle between the axis. Less angle would be better - for instance, 30° should fit OK - but such gears were not currently available. Another possibility is to use parallel gears about 3/16 inch thick, with filed teeth to become conic.

The 5/32-inch steel shafts are fitted inside a dural block, with flat ball bearings. The shafts could be mounted on standard ball bearings, but this is not quite necessary, because the efforts (loads) on the whole system are ex-tremely reduced. The gears don't have to stand power from a motor, like in helicopters. Here, they just have to keep both rotors at the same rpm, the drive coming from the relative airflow. (Remember that on an autogyro, the rotor is separated from the engine. It is freely windmilling.)

You will notice that the right rotor is turning clockwise, while the left one is anti (counterclockwise). The purpose is that in case a blade strikes the ground, the tip has a tendency to go back, thus reducing the shock.

The rotors are set at a 90° angle. When one rotor is parallel to the fuselage, the other is exactly perpendicular. This trimming is made with a small L-shaped fitting, screwed upon the arms. This 'L' holds a long screw fitted inside a wheel collar which is settled (mounted) to the shaft. Once the rotors are put at a 9030 angle, the '1' is screwed firmly to the arms (see fig. 1).

The gears, too, must be strongly fixed to the shafts with screws and Loctite, apart (in addition to) using filed surfaces on the shaft (see fig. 2).

ROTORS: Compared with the ones used on a helicopter, the blades will appear very broad. Innumerable tests made during the seven last years showed that narrow blades give but a poor lift. The airfoil is of lenticular shape, that is, a sector of a circle, with sharp edges. The model can fly with the flat-bottom type (marked A on the plan), but a slightly curved foil (airfoil 8) gives more lift. This airfoil is the same as the one used on the Antoinette aeroplane. A good old one!

For the blades, select a very good medium grade balsa sheet 7/32 inch thick. Take care that every blade has the same weight, to avoid vibration. This problem is well-known by helicopterists. Shape is given with a razor plane, then spancdees (3/64-inch rectangular plywood pieces thick) are glued to the blades to give more strength on the spots where the blades are secured with wing nuts (see fig. 3).

Covering can be made with dope coats and cellulose paint, or with thermo sheets (heat-shrink plastic). That is according to the way you prefer..." 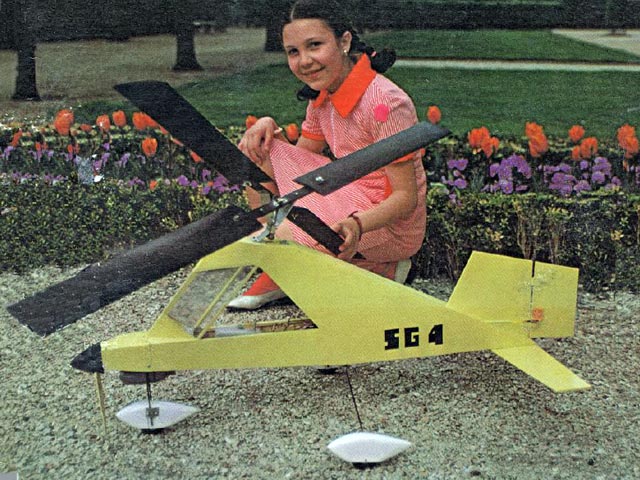