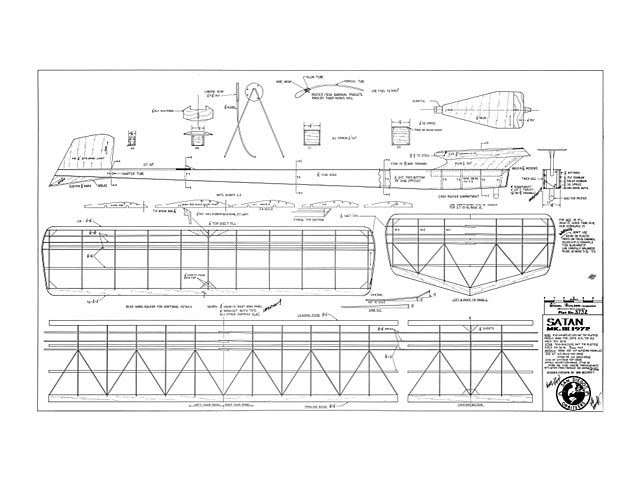 Quote: "A red-hot Class A competition free-flight that gets results without a lot of auto-gimmickry. Prepare for the coming season's battles with a sharp weapon. Satan Mk III, by Bob Beecroft.

The Satan series began during the last days of the short-lived 178 ounce rules. The first two national records were set with a heavy (9 1/2 oz), 320 square inch version of the design. These were the 1/2 A and A Junior records. Both records were set after the rules changed to unlimited weight.

With the then-current long motor runs, a large 425 square inch version was built for 1/2A - A competition, weighing 8-1/2 ounces. This airplane took full advantage of the long runs and had a supurb transition and glide, with surprising penetration due to the sharp leading edges used. This airplane picked up the Senior 1/2A and A records.

The large, light model even handled the wind well, as was proven one very windy year at the Phoenix Southwest Regionals. Many airplanes stacked due to the wind, but the 425 just went up and up, flipped out into the glide, and maxed every flight. This Mark II version was built in a variety of sizes from 320 to 1000 square inches.

The Mark III Satan, of which the 520 is the latest in the series, has been built in sizes from 240 to 1300 square inches. The Mark III comes after a lapse of several years in building activities due to service, marriage, college, and so on.

The current series configuration was developed after some study of the state of the art, and is a compromise between the very smallest and hottest climbers, and the larger Mk 11 Satans. The 520 inch wing and large stab give a beautiful glide, very fast climb, and smooth transition.

My own Satan 520 uses a Super Tigre G-15 .19. Initial choice for power was the Rossi .15, but due to lack of availability here in San Diego, I finally settled on the Tigre. Any of the hot .15's can be used with success, or for a milder ship, a Cox or other good .09 could be used.

CONSTRUCTION: The flying surfaces are pretty conventional, so not much detail is necessary - a couple of notes though. Don't skimp by using balsa for the top spars. Spruce really adds a great amount of strength, and very little weight. Pick medium grade balsa wood for the center section leading edge, trailing edge, hard for the bottom spars, and lighter grade for the main panels. The wood in the tips should all be very light stock. All the ribs are light quarter-grain 1/16 sheet, except for the ribs at the tip polyhedral breaks which are 3/32.

There's a reason for the strange plan layout. Try building the tips in one piece, and the same for the main panels. This way, a very closely balanced wing can be built. In addition, you prefabricate all the spars, ribs, leading and trailing edges, it is super-fast. Leave out the rear bottom spar until the truss ribs are all cut and fit into place.

The truss ribs are all put in as rectangles (slice a 1/16 x 3 x 36 sheet into three 1 x 36 inch strips), and leave them square on top for the time being. When fitting in the truss ribs, block up the leading edge of the right main panel 5/16 of an inch at the far right corner, to build in the wash-in. Same goes for the trailing edge of the wing tips; block them up 1/8 inch for wash-out.

Now let your Titebond (thinned 1/3 water to 2/3 resin) dry overnight - you can go on to the stab while this dries.

After the wing is dry, pull it up, and flip it over. It will sit steadily on the flat tops of the untrimmed ribs. The notches for the rear main spar can now be cut at the precise angle to which the spar passes through the truss ribs. Cement a SHARP razor blade to a piece of scrap, so that the blade protrudes a quarter inch. This makes an excellent tool for notching the ribs to the proper depth..." 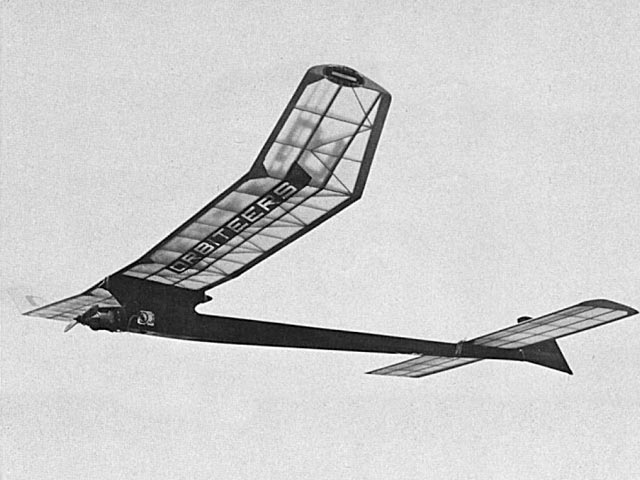