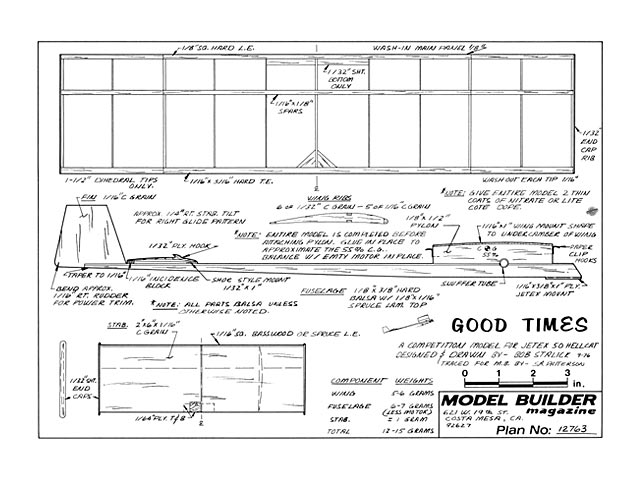 Quote: "This month's model is available to you as a full-sized plan. If you are intrigued by the challenges of Jetex powered flight, this little ship will get you going at a minimum of expense. Powered by a Jetex 50 Hellcat, the Good Times simply zips into the air at a phenomenal rate of climb. Best of all, it can be built with a minimum of effort and time as well as cash outlay.

Three models have been built since our move into apartment living, and they have all performed admirably. I don't think the D/T system shown on the plans is absolutely necessary, since the model is really easier to build than a hand launch glider, and the D/T system simply congests the model ... but they do thermal since the weight is nearly nothing.

The plans are self-explanatory, but a couple of notes are in order. Be sure to include the spruce backbone on the fuselage, or else you'll be troubled with fuselage breakage. Cover the wing with tissue and apply two coats of thinned nitrate dope. Dope the entire fuselage and stab with 2 coats of nitrate. It would help to glue a piece of aluminum foil under the fuselage just behind the engine to keep this area from getting charred by the blast.

When ready to fly, the entire ship should weigh in at around 20 grams with motor loaded. That's about .8 ounces, and with a good Jetex burn giving out around .6 oz. of thrust, the model really hauls. For those of you wondering how to get more out of your Jetex, follow these tips:

1. First of all, remember that Jetex is a finicky power source, and so you should approach the entire experience with some good humor and finickiness.

2. Be sure your fuel is really dry before trying to get it to light. What we do is to sandpaper the faces of each pellet and put in a 200 degree oven for a minimum of 1/2 hour. Then we remove the pellets from the oven and place in a sealable jar with a dessicant inside - Silica Gel from a camera shop or jewelers is fine. Don't open the jar until you arrive at the field, and don't touch the fuel any more than you have to.

3. We also take some of the pellets and cut them with a razor saw so that they are about 1/3 as thick as original. We use these to fill up the engine case.

4. When loading the engine, put in all the pellets and the thin pellet on top. Hot Stuff the wick to the top pellet. Leave out the screen and run the wick through the nozzle - coiling the wick against the top pellet also helps ignition.

5. The major problem encountered with Jetex, other than poor ignition, is blowby, caused by a poor gasket fit. A gasket can last for several flights if, when the motor is disassembled, you take care to twist the nozzle assembly from the case instead of yanking it off. If the gasket is shot replace it. If you don't, you'll get nearly as much thrust coming out the side of the motor as you get through the nozzle. If you are having difficulty getting Jetex engines, fuel and wicks, drop a line to Polk's Hobbies in New York. Aristo-Craft still imports the little devils, so they're around, although you might have to do a little hunting. The bigger hobby shops should also carry a good supply.

Hope you have some good times with your Good Times." 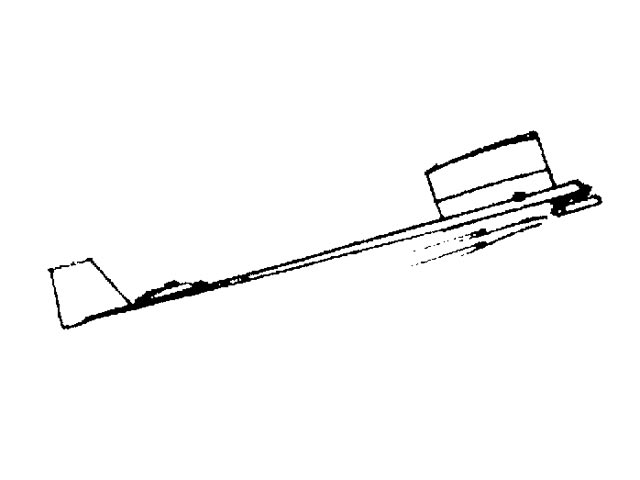