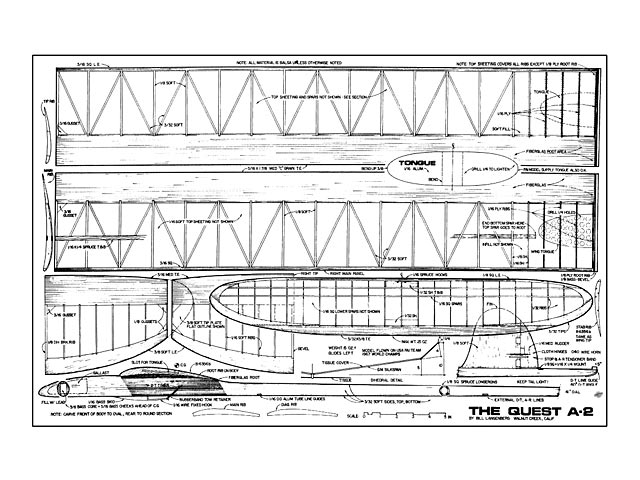 Quote: "If you are seeking the maximum in performance and contest-winning ability, then your impossible dream has ended as the Quest can do all these things and a bit more. Build it, and your adventure in modeling can begin.

Quest: a seeking; an adventure, usually involving a journey. The Quest is aptly named. Originally conceived as a design intended to earn a place on the USA Nordic team, it was successful in this endeavor. But the goal was not easily achieved. In 1962, the Quest led the West Coast finals at Fresno, going into the last round. At the 1964 finals in Tulare, it missed by 24 seconds a perfect score over eight rounds. Neither effort achieved the necessary victory. On the third attempt, it succeeded at the central fly off in 1966 at Bong Field, placing first and earning a position on the 1967 Nordic team.

During this period, and continuing to date, the model has undergone gradual evolution. As presented in these plans, it is a thoroughly tested design which has competed successfully in widely varied conditions of climate and terrain, from California to Czechoslovakia, from Texas to Wisconsin.

It is my opinion, developed over the last decade of Nordic flying, that consistent competitive success in this event is perhaps less dependent upon the model than on the flyer. If built according to the plans, I believe the Quest will prove to be reliable and consistent. The remainder of the ingredients for victory, however, must come from the builder.

CONSTRUCTION Stabilizer: Begin construction with the stabilizer so that it can be covered, doped and cured before any test flights are attempted. Weight is critical, so all balsa selected should be light and straight-grained. The ribs are made from C-cut 1/ 32 sheet, and notched for the 1/16 square spars as shown on the plan. Tips and trailing edge are cut from soft 3/32 sheet, and shaped before assembly. Be sure to pack up the front of the trailing edge to insure that the proper airfoil is obtained. After the spars and DT band hooks are added, sand the entire assembly carefully to proper shape.

The stabilizer should be covered with tissue and given at least three coats of thinned nitrate dope. I prefer nitrate to butyrate dope, because it seems to have a shorter curing time and less susceptibility to moisture changes in the air. If built with care, the completed stabilizer should weigh 7-8 grams. Should it exceed this amount, construct another to the proper weight. One or two grams of excessive weight in the stabilizer can have a noticeably adverse effect on performance.

Wing: Select three sheets of light 1/16 A-cut balsa. Using the full size airfoil shown on the plan, cut them to proper width for use as top surfacing forward and aft of the 1/16 x 1/4 spruce top spar. Carve and sandpaper the trailing edges to proper shape from 3/16 medium C-cut sheet. Notch these for the wing ribs. Next, assemble the inboard wing panels on a flat surface as follows: pin the trailing edge upside down to the board; glue to this the 1/16 sheet top surface aft of the spar; cement the 1/16 x 1/4 spruce spar, the 1/ 16 sheet forward top surface and the 3/16 square leading edge in position. Allow both wing assemblies to dry thoroughly before removing them from the board... " 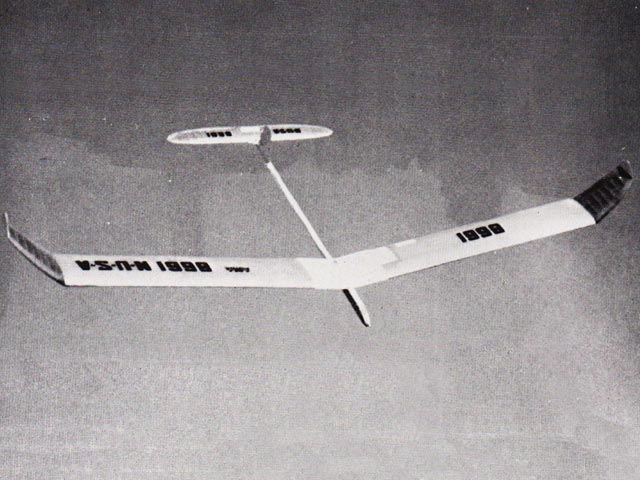