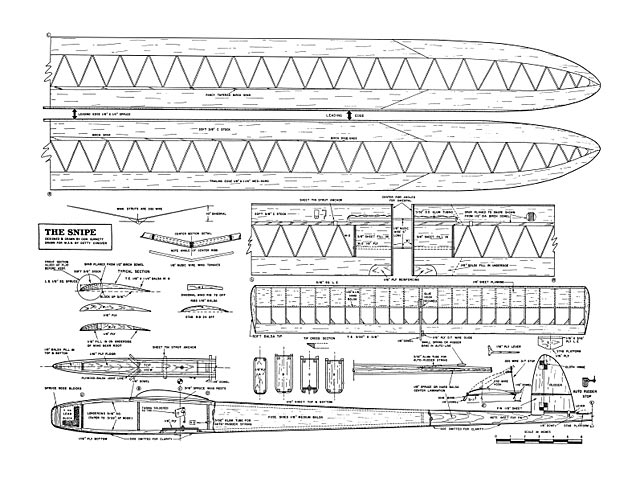 Probably no type of model can come closer to the majestic flight of nature's soaring birds than the A-2 Nordic glider. Perhaps this is the reason more modelers each year are applying their ingenuity to meet the interesting challenges which the A-2 gliders offer.

The design of a high-performance model that retains its performance in rough weather presents many problems. The Snipe was designed mainly for stability and wind penetration through the use of a high aspect (18 to 1) ratio wing. Span is 94 in, wing area 445 sq in, stabilizer area 78 sq in.

The high aspect ratio allows the use of a small stabilizer (18%) without making it necessary to have an ultra long tail-moment arm in relation to the span - an arrangement that probably would detract from the stability of the model because of its higher inherent inertia. The Snipe thus possesses a tail moment arm shorter than average, when compared to span. This arrangement also has the advantage of allowing the model to circle tightly in the area of a thermal.

Soaring birds, all of which possess extremely agile turning and circling flight characteristics, have a shorter tail-moment arm and higher aspect ratios than nonsoaring birds, further evidence of the soundness of the arrangement used in the Snipe.

The upper camber of the airfoil is that of the MVA 301 which was chosen because of its good all-around performance on gliders. The undercamber was designed with an entry angle of plus six degrees and a maximum height of 7% at 55% of the chord in an effort to produce the best rate of sink. A sharp leading edge creates the turbulation necessary for good stall stability, a critical factor in gusty air or in the turbulence of a thermal.

Due to the structural problems involved in high aspect ratio wings, the methods of construction and the materials used here are not conventional.

Birch long has been my favorite material for spars when considerable strength is required. It does not have the rigidity of some materials but can be flexed to almost any degree without breaking, provided the grain of the wood is absolutely straight. The spars may he sawed; or planed down out of birch dowels.

The solid leading edge makes the construction much easier than if ribs were used in front of the main spar, and the geodedic (diagonal) rib placement adds considerably to torsional (anti-twist) rigidity. One-eighth inch music wire is used to join the two wing halves together and to eliminate some of the upward flexing, 1/32 in wire struts are used. These struts simply hook on to a sheet metal anchor on the fuselage and may be detached easily.

Choice of proper wood is essential as the weight at extremities, the outer portion of wing and the tail, must be kept at the very minimum as a high momentum of inertia would certainly result in a less stable model. The solid-balsa portion of the leading edge should be light balsa, while the trailing edge should be medium hard... " 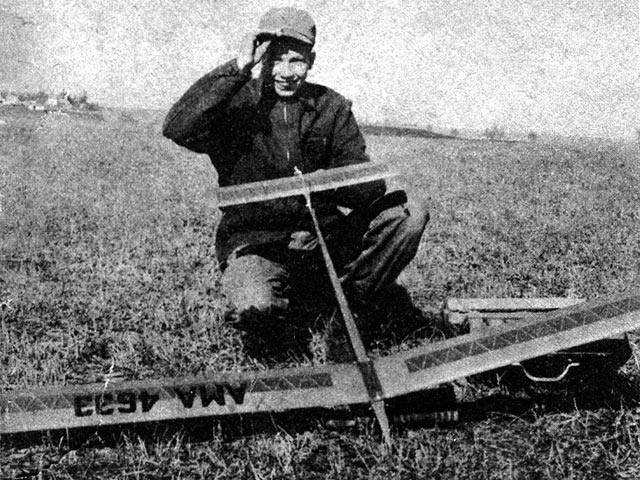