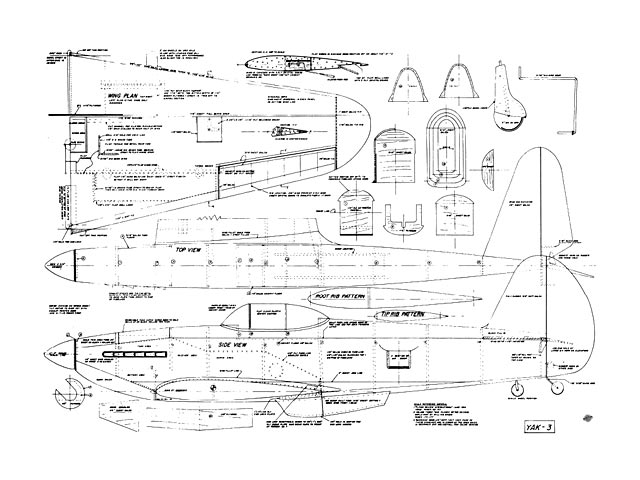 Development of the Yak-3 commenced late in 1941. The Soviet Air Force was demanding a fighter capable of maximum performance at low altitudes and able to maintain aerial superiority over the immediate battlefield. The designer, Alexander Sergeivich Yakovlev, came up with a small lightweight fighter. The Yak-3's reached the front-line during the early summer of 1943, and quickly proved itself in combat at low altitude. At most times, it operated at less than 11,000 ft and below this altitude it was markedly more maneuverable than the FW 190 or the BF 109.

As well as performing the role of interceptor, the Yak-3 was employed for close support of the ground forces and as escort of bomber assault aircraft, with one formation of Yak-3's preceding the bombers and attacking enemy airfields in the vicinity to keep Luftwaffe fighters on the ground, and another formation accompanying the bombers.

Here is an almost exact Scale model of the Yak-3 that has been one of my regular flyers for the past four seasons. Truly accurate scale drawings for the Yak-3 are not obtainable, to my knowledge; the ones I used to develop the model are to be found in the magazine Flying Review, June 1964 issue. These drawings would also be acceptable for a Scale presentation. Other useful scale reference material is listed on the plans.

Flaps are used on this model and are recommended for landing and take-off. Full 25° flaps are used on landing and about one-third of this for take-off. I find that I prefer to land the model with flaps; with the flaps extended, the model is a delight to land. Apply flaps for landing only after the motor has been slowed down to a fast idle to prevent zooming by the sudden increase in lift; also apply a little forward stick as the flaps are lowered. Practice of this will prevent a noticeable pitch oscillation in the model's flight patch. The Yak-3 will assume a fairly slow, nose-high attitude in the glide path, and may require some forward stick at times, to keep from stalling.

CONSTRUCTION: Before you start to build the Yak, note that the fuselage formers are shown as solid sheet balsa with no servo push-rod cutouts. I use full length 1/16 welding rod pushrods and drill the guide holes for these with a 5/32 music wire, after the fuselage structure has been built. Sharpen the end of a 36 inch long 5/32 dia wire and chuck it into a 1/4 drill. Drill from the rear of the fuselage through all the formers directly to the servo outputs. The 1/16 wire pushrods are supported at each former and go directly from the servo to the surface control arm without any kinks and only perhaps slight bend in the whole pushrod length. If you prefer another type of pushrod, cut out holes for the same in the formers before you start construction.

Fuselage: Glue nose piece A and B together. Contact cement 1/16 ply fuselage doublers to the 1/8 balsa sides. Make sure you have a right and a left side, and not two right sides or vice versa. Draw, with ruler and ball point pen, location of all formers on the inside of the fuselage sides. Build fuselage upside down over top view of plan. Using Titebond glue, glue in formers 3 and 7 first and set aside to dry. Join fuselage at tail post and then insert other formers. Rubber bands may be required to hold the sides in at the nose section. Add block balsa bottom nose piece. Glue on upper portions of all formers and cockpit and instrument panel formers.

Plank top and bottom of fuselage with 1 / 8 medium balsa. Also build up and carve the tank hatch. Before closing in the top nose section, locate the motor on its Tatone mount with 2-3/4 in spinner installed on motor. Build up around the motor with 1/4 in balsa sheet as much as desired. Carve the nose section to shape with spinner installed. Having the spinner on will help you get the right shape.

Wing fillets and air scoop are built later on with the wing cam-locked in place. Now add stabilizer and fin and also the block fill-in between stab and fin.

Wing: Cut out foam cores, or use commercial ones. Slice wing down the spar line with hot wire or use a knife and straightedge. Cut out aileron push-rod slot, and epoxy or white glue wing back together with spar sandwiched in between. Use the discarded bottom foam piece from the wing to line up the airfoil properly when gluing back together. Make sure a slot is left for W-1, the 1/16 ply dihedral joiner..." 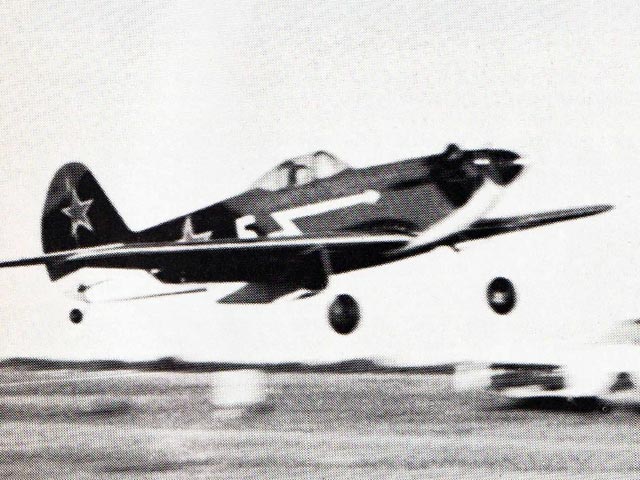