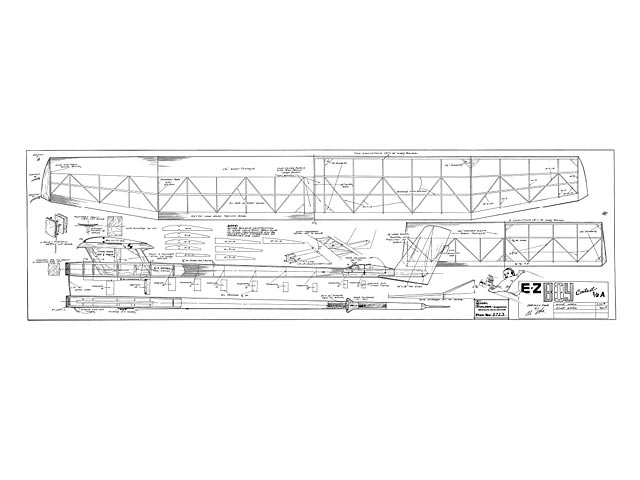 Quote: "Artist - modeler Al Vela designed E-Z Boy as a full bore competition airplane for the popular half-A event, but did it with the novice builder in mind to encourage new blood. He believes this configuration is best suited to the new AMA rules, where the glide will be more important than a rocket climb.

E-Z-Boy is my first 1/2 A in the last four years or so since the Tototl (Aztec Eagle) published in the Aug/Sept 1966 issue of Sig Modeler Magazine. I mentioned this particular design because these two little birds came to life in a very similar way. Both were a project for a new publication although they are formulated differently.

By the time the E-Z-Boy is published an entirely new set of rules will be in operation and so it was designed with these rules in mind. The approach is toward a more consistent craft emphasising the glide factor. It is my belief, relying on extensive experience in FAI power, that glide will be more important than a rocket climb.

The present designs in the 1/2 A class are the birds with very small wings and big stabs; a combination that will work fine if you can give them time to get up there where the strong thermals .are. In other words, it is a sort of gamble - if you get the rising air you can say you got a max, but if you don't, the thing will come down faster than going up! With the old rules, this combination of design was fine, but at the present, there is no room for gambling. There are several factors of great importance to consider, such as transitions, accurate timing in the fly-off, launching with precision and, in the short engine runs, the GLIDE.

To get to the real competition one must get first the three S's. So the need for climb is here! This was also considered in designing this little bird. The sections used have the characteristics of fast climb and good glide - not the floating kind of a FAT rib, but a penetrating glide less affected by drastic currents, or as the usual expression, ups and downs. The E-Z-Boy, when properly trimmed, will attain the necessary climb to make the 5's with 12 second engine runs.

For several years I had been sold on the DT fuse, but in the last two years, I have been bringing my ships down by the way of mechanical timers, and I have found that a precise timing can be obtained by using this device. So this is another feature incorporated in the craft.

Many flyers are not willing to use the timer DT for fear of malfunctioning. I would like to say I was one of them, but with the necessity of operating VIT (variable incidence tail) in my FAI ships I was practically obligated to use DT timers in order to operate auto-rudder-auto-stab and DT. This is when I learned that by giving them good maintenance and keeping them impecc-ably clean they will give you the confidence to rely on them.

Basically, the E-Z-Boy planform was created using some of the German school of design, although the all balsa wing and stab are not used - only the approach in aerodynamics and proportional balance. By this I mean not a FAI section, a short fat wing, and a big stab, but the more balanced aspect ratios of the German school, using more area in the wing, a safer CG, relatively small stab ala FAI, (30% of wing area. Quite enough by using all the area, with the turbulance of the rudder removed from the top of the stab).

There are several more factors that I can mention about the design, but this will take quite a lot of space and I feel I have covered the most important parts.

FUSELAGE: This is the backbone of the model, as it is the axis about which all the forces act. Build it as true as possible from the plans. If you are a modeler of experience you will find the plans very simple but if not, study them well until you get the message.

WING: The type of construction used here is one of the simpler ones. The templates drawn in the plans are a bit ogversize, this extra should be sanded off when finishing..." 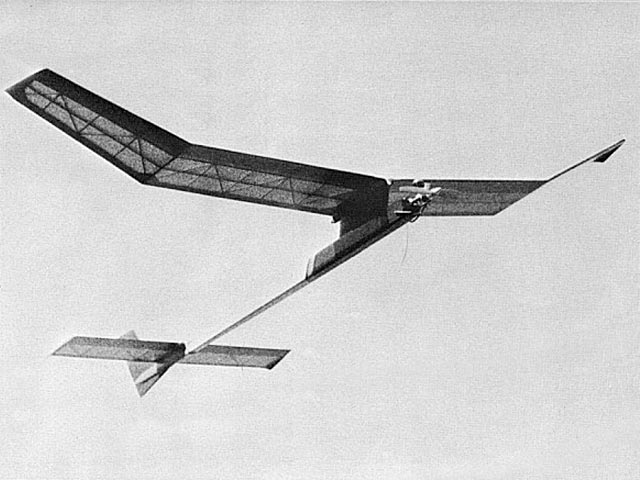