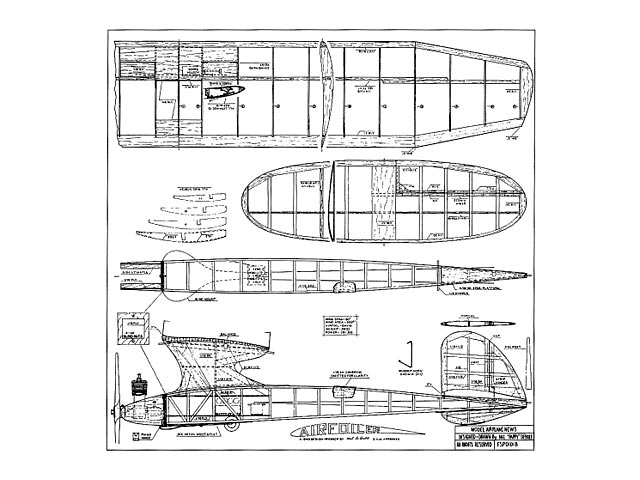 The original Airfoiler (oz12832) design first appeared in 1944. This here is the RC 2001 revision by Hal deBolt. This version has a wider pylon, wider wingtips and a shorter fuselage compared to the original 1944 version.

The first Airfoiler was created in 1940, and the updated design presented here is legal for Society of Antique Modelers (SAM) competition. The second one was born in wartime. It was quite different in design and was kitted by Dmeco in 1947. In the prewar years, I was deeply into free flight. I had out-grown my '37-'38 Blitzkrieg when Carl Goldberg impressed me with his Valkyrie. I had lost several Blitzs for lack of a proper dethermalizer. At the time, spoilers were the only known lift reducers. So with Carl's influence and a need for a new design, I designed the Thunderbolt. The spoilers did the trick; the T-Bolts kept on ticking. Winning contests without losing models gave me more time to look for things to improve.

Believing that a wider wing chord would perform better, I used a 5:1 aspect ratio with the T-Bolts. I did, however, have a desire to compare a higher ratio wing with the one I was using. Obviously, investigations do not require an exotic model; a simple box-style is sufficient. Bellanca's lifting-body ideas were also impressive. Regarding Bellanca: if the box had an airfoil shape, it could be added to the mix while adding some cosmetic appeal to my model.

Foresters were said to be fine engines then, and I wanted to try them. They came as a .29 and .305, so with a simple engine exchange, a single model could fly in two competition classes. So the Foresters dictated my model's size. Right off the board, the new model proved to be a very kind flyer - extremely easy to use and surprisingly competitive. However, the War terminated my free-flight activity, and I was unable to determine which of the new designs was superior.

Sometime in 1943, on a weekend home from the Navy, I learned that a local contest had been scheduled. I hadn't competed since my induction, so I had to fly my 'Foiler in this one. The model's performance at the meet was like something I'd never seen before! The weather was free-flight perfect, and the first two flights ended (dethermalized) on the field with excellent time. For the next flight, I locked the spoilers into place, and the 'Foiler sat sky-high, right over the field; it didn't want to come down. Eventually, it lost lift and landed less than 1/4 mile away. The flight time was hard to believe; one hour and five minutes..." 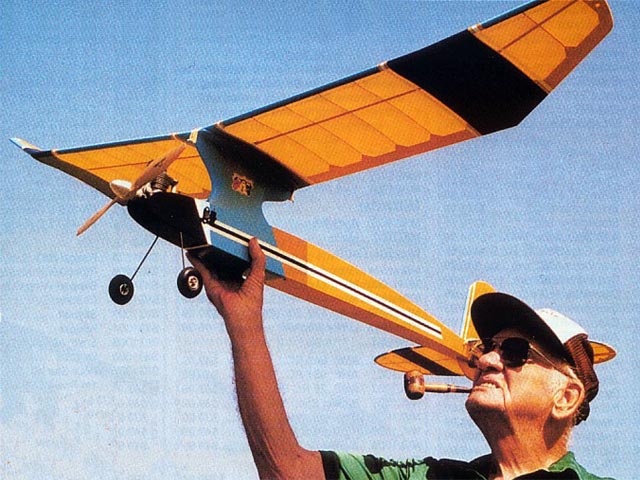