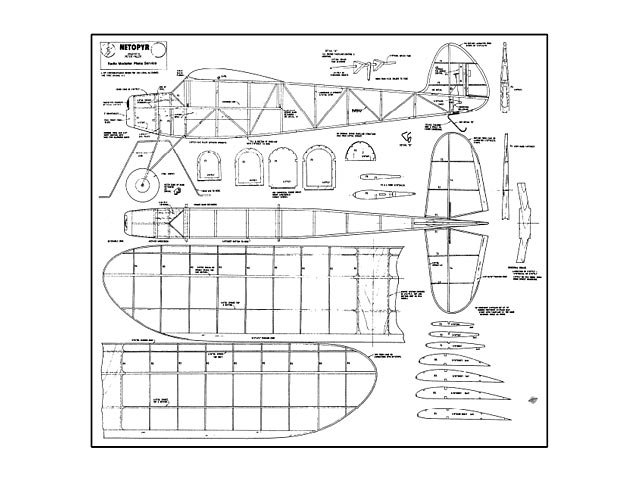 Note the original NL-532 Netopýr was a FF design by Neubert Ladislav, first published in 1943. This here is a later modified version for RC from 1993.

I know very little about Netopyr; it was one of a series of plans sent to me by a contact in Czechoslovakia. The designer's name is a squiggle on the plan but the date is 1942! It is interesting to consider that in Britain there was a total ban on power model flying at that time and that engines and materials were extremely hard to obtain. Yet, in Czechoslovakia which was under German occupation, there was obviously a lot of active power modelling going on and even magazines being published.

The other designs in the range are extremely interesting - a low wing model which looks scale and does not have excessive dihedral and an extremely complex gull wing model indicating that the Czechs were very advanced in their power modelling. Gordon Counsell featured these plans in his column some years ago.

The plans arrived as photocopies on A3 paper, taken straight from a magazine. I enlarged them which took a lot of paper and then traced the result. The original model used 1/8 sq spruce for fuselage and spars, I changed the fuselage to 3/16 sq balsa and also substituted this for the main spar. In retrospect I believe that the main spar could have been left 1/8 sq spruce as well.

The tailplane is all-moving for trim adjustment so this was used for the elevators. The rudder was quite small so it was extended down to the fuselage; this was fortunate because I used the dihedral brace as shown on the plan and this gave about half the dihedral that the model should have had. I think that the original rudder would have been adequate with the correct dihedral.

Fuselage: This is built in the normal way, two sides joined with cross braces. The fin is part of the fuselage and is very thick at the base to provide support for the tailplane. I added some extra sheet at the nose and fuselage bottom because of the radio installation. The fin is supposed to have a cane outline but I used laminated 1/32 strip formed round a cardboard former. This had insulating tape wrapped round the edge. This technique was also used for the tailplane tips and wing tips.

I used a Swingee for rudder operation; this allows a completely hidden control system but it did mean that I had to fit a bellcrank under the tailplane horn, a bit tricky and this is not shown on the plan. One could possibly find a snake that would take the bend required or one can fit a horn although this would require bending down to clear the tailplane.

For engine mounting I used a pair of Sig aluminium mounts that I had handy but a Micro Mold Tee mount would work with Micro Mold thrust wedges. The cowl on the original was beaten aluminium with a sheet wood bottom; this was changed to ply formers with 1/64th ply covering and balsa sheet front. Covered with chrome Fibafilm it looks good. The tank was soldered up from brass shim but a standard tank could be used.

Tailplane: This is made in two pieces which are identical - just remember to put the spar upside down for one, although I doubt if this is essential. The pivot is brass tube running in brass tube bearings in the blocks in the fin. The horn is made from PCB which will solder to the brass tube. If you can get a bit of double-sided PCB it would be stronger but mine is single sided and is still working well after several hours of flight.

Wings: There is not a lot to say about the wings; they are completely conventional. The purist may want to make all the spars from spruce. I covered the centre section with 1/64 ply and extended it out at each spar as shown on the plan as this adds considerable strength to the butt joins on the front spar, rear spar, leading and trailing edges and also provides protection from the elastic bands. The wing retention dowels are interesting; they are flat strips with hooks carved into them and they are solidly held between two uprights with a third on top to hold them down.

Covering: I covered the model with Solartex but Fibafilm would be great. The wing is flexible and so could warp if care is not taken. Covering the fin is easier with Solartex; cover the sides of the fuselage and the fin in one - with a little cutting and tugging you finish up with a beautifully streamlined fin. Installation No problems here, two servos abreast and one in front. I used a standard Sanwa servo tray, Rx underneath and battery in the front of the radio bay with a pushrod to the elevator and either a snake or pushrod to the rudder depending on your choice of operating system and a snake to the throttle.

Flying: The model is perfectly powered with a PAW 149 RC. It can take off from grass with this engine and climbs steadily away. The throttling is superb; on the second flight I was way up under a black cloud and decided to cut the engine. The model took about five minutes to come down and when it got close to me I could hear the faint ticking of the engine so I opened up and away it went at full power!

The model is one of the nicest vintage models I have flown; low, slow fly pasts are a dream, touch and goes on relatively rough grass are a pleasure on the big Trexlers.

Elevator response is very good as one would expect and no trace of flutter has been noticed in spite of some rather over enthusiastic flying. Rudder is also very responsive but as my model has reduced dihedral I would advise you to be cautious on your first flights - rates would be a good idea here.

Netopyr is unusual in many ways; it is also uncommon on the flying fields at the moment but how long that will last is another matter - not long unless I am sadly mistaken. I can say that, for quiet evening flying, it is great - a can of fuel, a Tx and some spare rubber bands and a whole en lot of pleasure is yours." 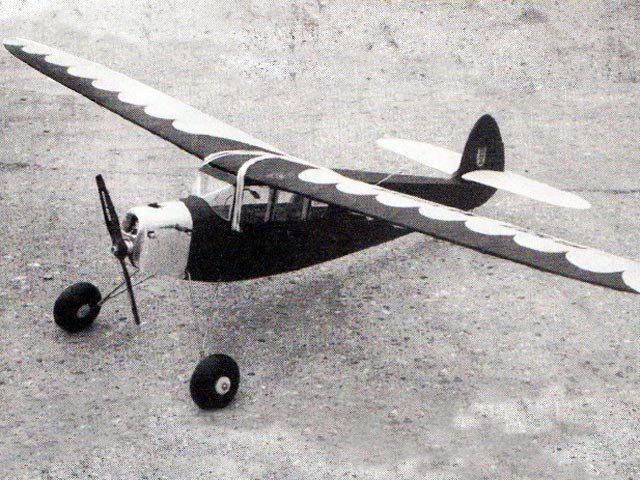 According to the indefatigable Google Translator, Netopyr means Bat, which doesn't seem out of place considering Transylvania is across a border or two. Hmm, make it three!
Miguel - 18/05/2021
Add a comment