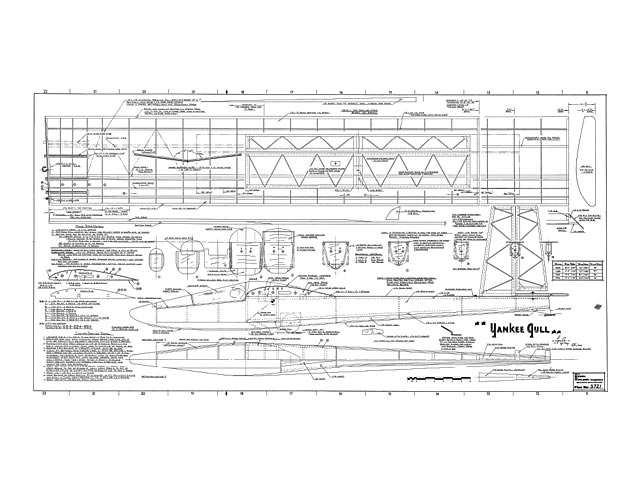 Quote: "Yankee Gull, by Le Gray. The ultimate machine? No. But a different approach to the common problem - soaring performance. Finesse be hanged, here's a direct assault on the world's thermal population. An affront by brute force, wrapped in a three-for-one variety package.

Ralph Dodsworth, LSF/032, in Saskatoon, Saskatchewan calls his 12-foot version the 'Canadian Hawk', but like the man said, a rose by any other name smells. So call it what you will: 'Tennessee Turkey', 'Connecticut Canary' or 'Arizona Albatross' - the Yankee Gull does one thing very well. It flies. Of course, Ralph doesn't know that, yet. Winter came suddenly one night while he still had a few hours of detailing work left. But come the Spring thaw, his 'Hawk' will provide many hours of pleasant thermal soaring .. . before the world turns white and it's building season again in Saskatoon.

Bill Whitney, LSF/120, in Woodland Hills, California built the first-to-fly Yankee Gull. It was his first-ever model airplane. He elected to go the 100-inch route - same plane as Ralph's, but with a shorter span. Bill's wing seemed stubby with only a 10 to 1 aspect ratio, it looked different than 'normal' sailplanes. But Old Flying Buddy (OFB) Whitney's Gull could hardly have worked out better. For its apparent size, the all up weight of 4 pounds was discouraging. It promised to be a lead sled, definitely not a beginner's airplane, and when it was time for first test flights, we didn't admit our concern to OFB, or his wife or his daughter, or his son. But that just-over-8-foot-span packed 7 square feet of area, and that big wide wing carried its 9 ounce wing loading like a 'conventional' skinny wing does 6 ounces - or so it seemed.

After the first flight, OFB's smile and his wife's - and his daughter's, and his son's - made them look as if they were standing behind a white picket fence. We commented about the deep gratification and the sense of satisfaction realized when a designer's creation performs as anticipated. They were kind enough to play-like they believed it, even the kids.

The concepts incorporated in the Yankee Gull grew over a period of a year or so from several influences, jealous observation of large free flight gas model glide performance; a hunch that the narrow wing chords used on most R/C sailplanes, imitating full-scale appearance, might not be too smart due to Reynold's Number effect; and a very interesting NASA publication Technical Note D-2052: The Design of Sailplanes for Optimum Thermal Soaring Performance, by Clarence D Cone Jr of Langley Research Center. This report makes some pretty interesting claims - albeit regarding man carrying machines - for very low aspect ratios, like 6 or 8 to 1. The 100-inch span, 10 to 1 aspect ratio original that OFB built seems to verify that at least one, or possibly some combination, of these several influences has merit. Wonder which one?

On a winch launch, OFB's Gull climbs like a turpentined cat, hands off, when lighter machines are struggling for altitude. It floats like a free flight, but has reasonable penetration. Turns are flat and tight when wanted. To sorta sum it up, the Yankee Gull/1000 - 1000 for inches of wing area - soars like a lightweight yet handles with the solid no-nonsense feel of a heavy machine. The Yankee Gull is an easy sailplane to fly. Well, let's face it. It was OFB's first model and he learned to fly with it, including all his LSF Level I work. No disrespect, but like all of us OFB kinda had sixteen thumbs and no depth perception at all. And, on occasion, he too could forget which sailplane in the covey he was supposed to be flying. But OFB and his Yankee Gull stuck together, with a total of about three gallons of fast-drying epoxy, and are now a coming tiger-team, just having a blast in West Coast sport flying and competition circuits.

Since Dodsworth's progress in Canada had suffered a white-out, the Yankee Gull/1440 had not been tested, and this had to happen before plans could be published. So to prove - hopefully - that the big end of the variation stick was valid, we started cutting and glueing. There hadn't been a twelve-footer in our barn for over a year, since we wrapped one around a light post on landing approach, and we welcomed an excuse to build one. It's simple. Big ones are more fun. In about three weeks, we were ready for test flights. The Yankee Gull goes together quickly, in any size..." 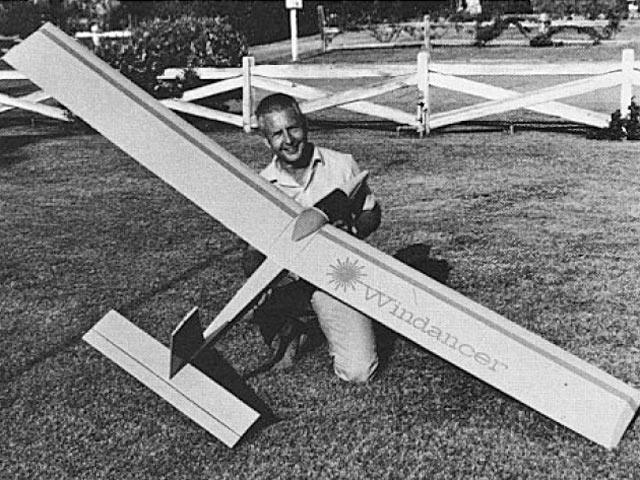