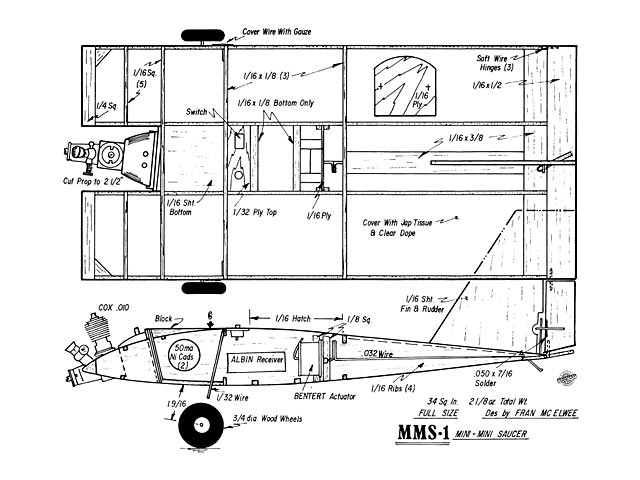 Quote: "Steve, Mary, Find attached a mini flying wing by Fran Mc Elwee, published in the Aug 1973 Model Airplane News. I think it was an attempt to make the smallest wingspan RC model. I never built it but I suspect it would have been a challenge in the seventies. It would be much more practical with electric power and the sub miniature radios we have today. I would build it as 3 channel model. It would probably make a good indoor RC model. A scaled up version would fun."

Quote: "Fran McElwee (Super Saucer #5, MAN April 1973) is an avid experimenter; he rarely arrives at the field with anything that can be considered 'usual.' Even so, his latest kick must be considered startling, to say the least. We nominate Fran's latest achievement over reason, MMS (Mini-Mini Saucer) #1, as the world's smallest R/C airplane ever - any discussion?

Fran elaborates: This plane is a recent attempt at a real mini-R/C plane to see just how small one could successfully be flown. A 12 x 20 in oval saucer has been flying for years so a much smaller one was attempted. Figuring I needed all the area I could get, I reasoned a rectangular platform would work best.

The radio gear boils down to an Albin receiver, Bentert magnetic actuator, two 50 ma nickel cadmium cells with a tiny switch and charging jack. Total weight of equipment is 7/8 oz. All items are handled by Ace R/C, Higginsville, Mo. Engine is a Cox .010 TD.

First small ship was 6 x 11 in (66 sq in) and weighed three ounces. With lots of down thrust and right thrust, it flew quite well and was amazingly stable, even with no dihedral. That ship showed a rocking tendency when approaching a stall. Plane climbed very quickly but glided like a re-entry vehicle, flat but very steep. Wing had a 1-1/2 in thick, fully symmetrical airfoil. Because of its size and light weight it could really take a beating.

Second version built is the one shown on plans; takes about three evenings. Same equipment and engine was used with a 2-1/2 in propeller. A slightly asymmetrical airfoil is used for better lift in this smaller size. Full power rotates the craft when launched and a method for cutting down power is needed; torque is a problem. Several half-way successful flights were made with reduced power; nice control was available. Each time the engine came up to full RPM, however, I had the greatest rolling ship I ever saw.

At this writing, an exhaust throttle has been made and future attempts will try to set a controllable RPM. The landing gear was added, hoping it would help stabilize the platform; it hasn't. The 6 x 11 in machine has no gear and does handle torque though it will rotate when hanging on its prop in a stall; perhaps more downthrust is needed.

These are novelty ships and get more laughs at the flying field when shown and flown. Naturally any wind really fouls up these little postage stamp vehicles, but late summer evenings provide just the right conditions for loads of fun, and isn't fun what the hobby is all about?

It's for sure that no one can argue that last point. I'm pretty sure that the Fran Mc-Elwee's of this great hobby have the most fun and we sure hope you fit that category!" 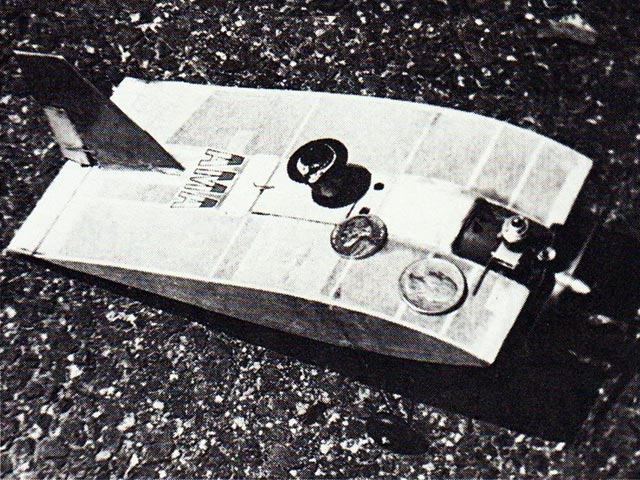