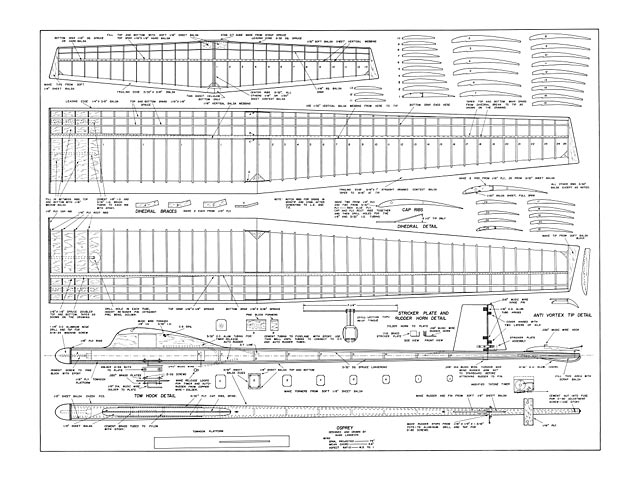 Quote: "Looking for that A/2 Nordic that can bring you into the magic winner's circle then try our 'Osprey' as its a winner! By Hugh Langevin.

That model always ends up as the highest of any model in a thermal, how come?" - is the comment that I have heard many times in reference to Osprey and is an indication of its good performance.

Ruggedness, reliability, easy towing, thermal holding ability, all weather capability - these are the character-istics A-2 enthusiasts are always looking for in a model. Osprey was, of course, designed with these specifications in mind. Performance, to date, indicates that most are present in this design.

The model was originally developed for the 1964-1965 FAI Free Flight Team Trials program, which was concluded very successfully as the Osprey won a place for the writer on the US Free Flight Team to the World Finals held at Kauhava, Finland in 1965. Some refinements in design were made and the Osprey was used for the 1966-1967 F.A.I. Team Trials. Again, suc-cessfully as a team place was won to Sazena, Czechoslovakia site of the 1967 World Free Flight Finals.

The Osprey has proven itself to be an excellent contest model. It's most en-dearing qualities are: its easy towing, ability to handle light thermals as well as heavy turbulence, and its amazing ruggedness. The model has been flown repeatedly in winds of up to 40+ M.P.H. without suffering any failure. During the times it was flown in the 40 M.P.H. gales it has been caught up by the wind and sent cartwheeling, end-over-end over runways and plowed fields. The only damage suffered being punctured covering. Still air time is fairly high. up to two minutes, forty seconds.

Several different versions of Osprey have been built, but none have been as successful as the original - take your time and win some contests.

Construction: Wing: Begin by cutting out the plywood root ribs. The best way, that I have found to do this, is to cut the plywood into rectangles some-what larger than the configuration of the ribs - tack glue the stacked plywood rectangles together then saw, sand, cut notches and drill, then break apart and cement to leading and trailing edges.

Be sure to put shims under the trail-ing edge and under the front part of the ribs while assembling the wing to allow for the proper airfoil configur-ation.

Cut notches in all the #1 ribs prior to assembly, however; the notches for spars are more accurately and easily cut in the tip ribs after the ribs have been attached to the leading edge and trailing edge's. Be sure to add the tapered "doublers" to top and bottom and to taper the main spars as noted - this allows for the proper flexing of the wing during tow. The vertical webbing is essential for stronger structure and for preventing warps, be sure to put them on.

Add main spar to the top - before taking panels up from the board. Then add bottom main spar - trim dihedral joint for proper fit - join the panels and add braces (use epoxy cement) - then put in the remaining spars.

Install tubes into root of wing at this time. Either secure with epoxy or solder washer retainers to the tubes. Now add 1/20 in sheeting to bottom leading edge - add tip blocks - fill in root areas with 1/16 sheet top and bottom as indicated - sand leading edge, trailing edge tips..." 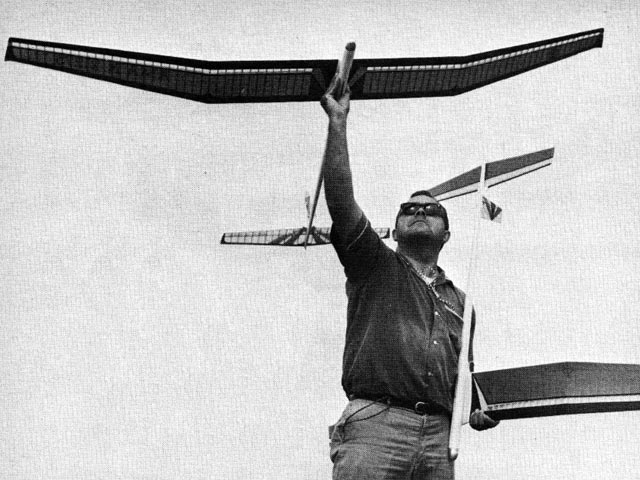