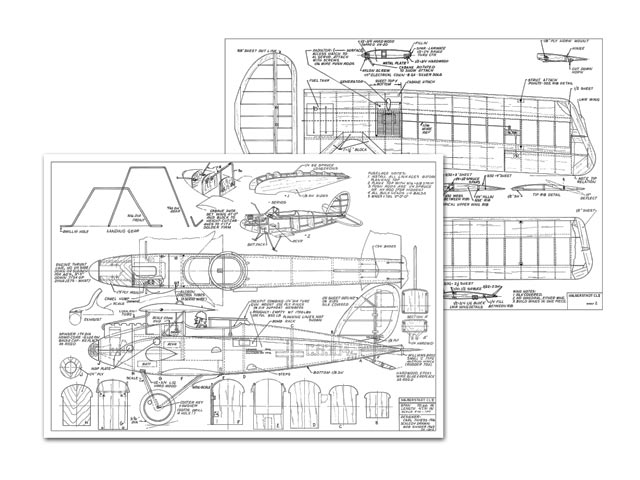 THE German branch of the Bristol and Colonial Aeroplane Co, of Bristol, Deutsche Bristol Werke. Halberstadt was renamed Hal berstadter Flugzeugwerke when the Great War broke out. Carl Theiss, chief designer for Halberstadt, marked all his designs with some degree of resemblance to each other.

The Halb CLII was designed in response to the lightened C-type specification in 1917. which required an aircraft to equip the Schultzstaffeln (protection flights) for protection of the C-types used in photos and reran flights. However, the German High Command changed the Schultzstaffeln to Schlachtstaffeln (battle flights) and the Halbs were used for ground-support duties and, as time permitted, in escort duties. The battle of Cambrai in November 1917 verified the suitability of Halbs as ground-support aircraft. In fact, a British Court of Inquiry was convened in January 1918, to examine the cause of the defeat in this battle.

The Halb was a strong (though lightly built) small two-seater. Power was by the ubiquitous 160 hp Mercedes DIII. The fuselage was plywood covered with metal nose cowling. The fixed tail surfaces were wooden framed and fabric covered, the movable surfaces welded tube and fabric. Wings were wooden construction, two spruce main spars, plywood leading edges, and were set at an unusually high incidence angle. Ailerons were welded tube and fabric, and operated through torque tubes into the center section and through cranks and pushrods into the fuselage.

Struts were steel tube with bracing cables. The high ring-mount and cutout wing allowed the gunner 360-degree firing. The center section of the wing housed the radi-ator and gravity fuel tank. The under carriage was steel tube spring with multiple spiral springs. Tail skid was of ash and was internally sprung, the pivot center being in line with the rudder post.

Armament was one or two fixed Spandau machine guns forward, and one manually operated Parabellum machine gun rear. The rear cockpit also had a rack for four or five, 22-lb bombs or anti-personnel grenades. (Model note: the details shown for Spandau and Parabellum were roughly scaled from photos to a looks-about-right scale and probably are not accurate.)

Spinner in the photos is balsa (!) and will be replaced as soon as some manufacturing company will let it be replaced. (Hint.) Wheels are 5 in Williams Bros. Radio is a Kraft KP6.

Color scheme: In 1917 prior to the Lozenge pattern, various shades of purples and grays were used, every batch varying slightly in hue so almost anything is scale. The cross design shown was finalized in 1918 when the German insignia changed from Cross PATEE to the Greek cross which was easier to identify in the air. The model was doped with gallons of this and that, and a sort of Wehrmacht gray appeared. The crosses are MonoKote, easy but too glossy. Mod. No. 2 of the model was 'scale' egg-plant purple. The color scheme and markings on the prototype were modeled after aircraft serial 6214/17, taken from a black-and-white photograph, so the color is only generally accurate. Note that the serial number and weight data appear on the left side.

Scale: If you're a real scale nut you're gonna have to dig up some airfoils, 2 in/ft 6-cyl engine, and a batch of obscure facts, As shown, the plans are scale except 2312 airfoils are shown in an attempt to get some maneuverability, and to ease construction. The incidence on the actual CLII was ridiculous, being in the vicinity of eight degrees. The 12% airfoil makes the balanced ailerons act as speed brakes, unless the bottom surface is warped slightly as shown on the plans. The plans show a few scale notes which can be incorporated or ignored.

After building the prototype, the final-version plans were drawn with modifications which have not been proven, but which appear to be reasonable. They are: 1) The prototype had a 16% airfoil, a rather blunt L/E, and looked clumsy - so the plans have a 12%; 2) Reduced horizontal stab to scale size it just looks small; 3) Built-up tail surfaces is an attempt to get 2 oz. out of the tail, for 12 oz. out of the nose; 4) Revised cabane mounting; 5) No wheel collars (they are too easy).

Fuselage: Everything is typical and only a few suggestions are required. Build the sides, make the box, install top formers and stop. Install cabanes, pushrods, servos, en-gine, tank, and then proceed to plank the top.

Wing: Normal construction. The only problem is aligning the wings, struts, and cabanes to each other and the fuselage; takes patience..." 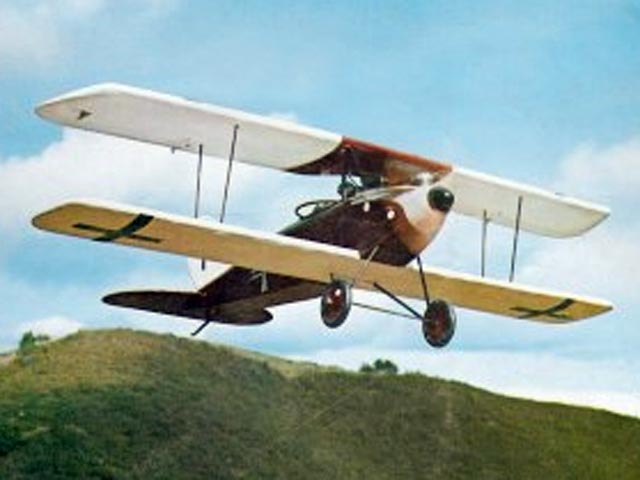