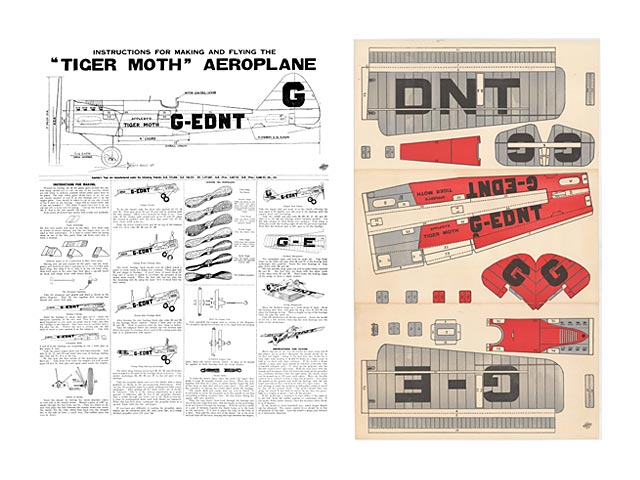 Quote (from ad, see pic 003): "This is the most wonderful Model Aeroplane Construction Set ever produced, and is very simple to make up from the profusely illustrated Book of Instructions. There are no difficult parts to make.

The set is complete with miniature set of tools. Real elastic shock absorbers are fitted to the chassis, and the wheels are fitted with our new miniature Aeroplane tyres. A new form of wing wire bracing makes the model very rigid and practically indesctructible.

A working joystick is fitted in the cockpit to make the take-off foolproof. The engine housing is completely made in aluminium.

Never before has such a realistic and wonderful flying model been offered to the public at such a low price. The model is beautifully coloured silver and red, and has a wingspan of 22 inches, and will rise off the ground under its own power and fly 200 feet. It will loop, bank and turn. In fact it will perform any maneouvre if the controls are set correctly.

Quote: "Here are plans from one of the early model aeroplane innovators, William Edward Appleby. The monoplane Tiger Moth, was rubber powered with a wingspan of just over 22”. Wings and fuselage were printed card stiffened with hardwood strips. the original nose was in pressed aluminium, but could be alternatively reproduced from balsa. All the wire work can be prefabricated using the plans, plus the use of current commercial props and wheels.

Appleby was born in Newcastle in 1902, his father was a Clerk with the Newcastle Corporation. As a boy, Appleby worked at the Gosforth Aircraft Works of Armstrong-Whitworth. Later he rented the hangar at Cramlington Airship Station to carry out the manufacture of model aircraft from 1925. This business didn’t last long and by 1933 the Receiver was called in to fire sale the stock, and subsequently dissolve William E. Appleby Ltd in 1937.

Appleby’s ENCYCLOPAEDIA OF THE WORLD'S AIRCRAFT; a purchased collection on flying history containing thousands of mounted newspaper cuttings and extracts from journals, photographs, pamphlets, and trade literature, is available to view at the National Archive. William died in Leigh-on-Sea, 1981." 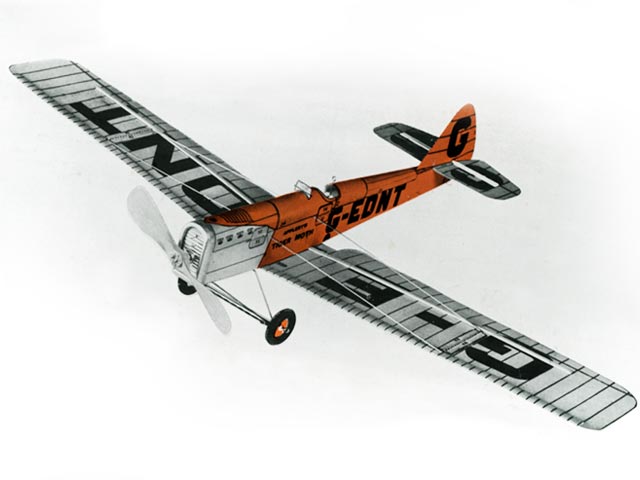 This charming model is a kind of "time capsule" how flying scale models were seen in the earlier parts of the 20th century. There are some similarities to the DH.71"Tiger Moth", but also lots of freedom taken. It´s a single engine low wing taildragger aircraft with lots of wire braces, an in line engine and it carries 1 person. But: All surfaces got vastly different contours, the engine is completely different (water cooled engine as opposed to air cooled DH Gipsy on the real thing, radiator looks like taken from an Airco DH.16) and the registration is pure fiction. Still, it looks great! :D
Martin - 05/05/2021
Right now, this is my favourite plan on Outerzone. I think the shape is a DH4 with the top wing ripped off, maybe? This seems to me a very modern kind of design really, I mean it's stressed skin, and it strikes me that everyone nowadays has a colour printer, but in 1930 printing was expensive. Not a domestic or hobby activity, if you see what I mean. We could all be building models like this now, from A4 office paper, then maybe covering them in doculam.
SteveWMD - 05/05/2021
Hi Steve, your guess about a "DH.4 monoplane" feels correct. With some refinement like adding a radiator, an exhaust, wings with a thin airfoil and printed wing undersides, this should make for a nice, nostalgic cardboard model. Maybe even a what-if. I will give it a try, expect some pics within the next 2 weeks. Cheers,
Martin - 05/05/2021
Comment about the DH4 sounds right as the best known Rigby model the Swallow looks like a Supermarine SB6 without the floats
Mike Hollamby - 06/05/2021
Added a pic of the kit box contents [pic 005], thanks to PeterRydyn.
SteveWMD - 07/05/2021
Add a comment