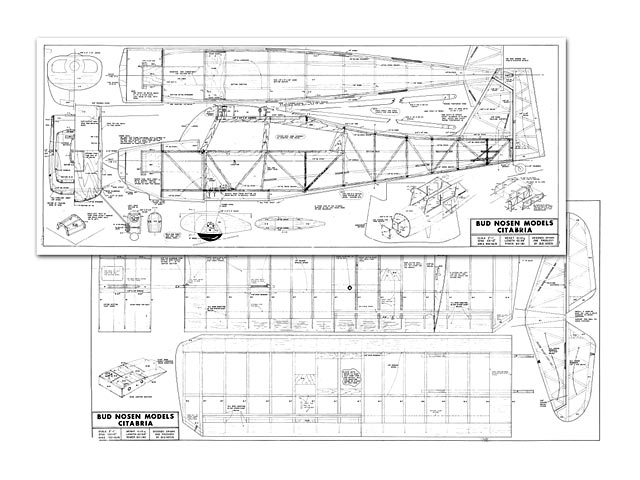 In the summer of 1977 I made my annual trek from sunny Hawaii to California to take in some flying, do some shopping, and to take a break from the demands of working as a district manager at one of the local newspapers. Having built primarily kits in the .40 to .60 size, I felt that it was time for a change of pace - something BIG!

While shopping at one of the California hobby shops I noticed the Citabria on the shelf, immediately decided that this was just what I needed and purchased the kit. I wanted to get started building the kit right away; but since I had three weeks of vacation remaining, I had to settle for visions of the big bird flying while I pored over the instructions again and again.

Upon our arrival back home in Hawaii, I had my wife Harriet unpack our luggage as I quickly went to my workshop to start construction. To this day I am still amazed at all the balsa that was packed into the box, and material was of top quality. Bud Nosen must have developed a system whereby all the contents of the kit fit into the box with little, if any, space left over. The first thing I did was to bag the contents by rudder, elevator, fuselage, and wing sections.

I decided to build the wing in one section rather than the three called for in the kit, for added strength and quicker assembly time down at the flying field. Halfway through the construction of the wing, it dawned on me that the 105 in wing might pose a problem in transporting the model to the flying field, so I rushed out to the garage to measure the dimensions of my station wagon and was relieved to find that transportation would be no problem.

The right, left, and center panels were built according to plans, then joined together. The aluminum tubes from each panel were then bolted together and four additional 11 inch spruce spars were added for strength. Sixty-degree control horns were utilized instead of the 90° called for in the plans for greater throw on the ailerons.

The fuselage and tail sections were all built according to plans except for a slight modification in the engine/tank in stallation. The firewall was made non-removable for strength and rigidity, and tank access was via the radio compartment (cabin) instead of through the firewall.

Details: Although the materials were of top quality, the kit does not contain sufficient clear plastic for the cabin windows. A quick trip down to the local stationery store quickly made up for this shortcoming. The instructions leave something to be desired for someone who lacks kit-building experience. Having built models for over ten years, I encountered no problems; however, someone with lesser experience might run into some difficulty in the construction. It might he suggested that the plans show engine, tank and radio installations as an aid to construction.

Finishing: Prior to covering, all wood sections were covered with a coat of Midwest Balsarite. Super Coverite was chosen in preference to heat-shrink plastics because the fabric-like appearance of Coverite would make for a more scale-like finish. K&B nitrate dope was applied with brush over the Coverite. It might be noted that it took over a pint of dope to cover the wing alone! K&B Superpoxy white was then sprayed and the plane set aside to dry. Plastic tape was used for masking and Superpoxy red sprayed for trim. Striping on the fuselage was done with Bridi tape.

Equipment Installation: I decided to use my Kraft 4-channel Series 72 radio with KPS-10 servos for the controls. The 550-mah battery pack was installed in the engine compartment under the fuel tank. The receiver and servos were installed as far forward as possible due to the short nose moment. The KPS-10s have more than sufficient thrust to handle the control surfaces; however, there was some flexing of the pushrods for the rudder and elevator. This was corrected with the installation of pushrod guides in the tail section.

Engine is a Super Tigre 71 with a Perry pump and carburetor swinging a 14 x 6 Top Flite prop. A 16-ounce Sullivan SST fuel tank was installed sideways in the engine compartment with a 2-ounce noseweight added for balance.

Overall flying weight came out at about 14 pounds. The wing is held down by four 2-inch 1/4 -20 machine screws instead of the 6-32 called for in the kit.

Flying: After reading the flight instructions on the Citabria, I decided to alter the controls on my radio. Being a Mode II flier (aileron/elevator right stick, rudder/ throttle left stick), I had the rudder hooked up to my aileron stick and the aileron hooked up to my rudder stick. A flier with greater skill and dexterity may find this modification unnecessary, but for me it proved most helpful since most of the response comes from the rudder instead of the ailerons.

Having exhausted excuses for not flying, I decided to give it a try one Saturday morning at Sandy Beach. Normally, tradewinds of 15 to 20 knots are common but mother nature smiled on me and provided light winds for the maiden flight. The wing was bolted on, struts attached, engine started and a final check made to see that all systems were go. Power was applied to the ST 71 and the takoff roll commenced.

Due to the tremendous lift of the wing, there is a tendency for the aircraft to break ground before sufficient airspeed is attained. A slight touch of down elevator kept the bird on the ground until sufficient airspeed was attained and rotation was made after a roll of about 100 feet. The only trimming required on the first flight was slight down elevator trim. The rudder proved very responsive. Beautiful turns are achieved co-ordinating rudder and ailerons.

For flying from a grassy field with rough terrain, the DuBro 5 inch wheels without pants have proven very good in ground handling and on takeoffs and landings. For display, 4 in wheels with pants are used. Subsequent takeoffs were made with down-elevator trim which was removed once the Citabria was airborne.

The ST 71 was more than ample to handle the 14-pound Citabria. Landings are a sight to behold!

The Citabria is a great crowd-pleaser and has fufilled my dream of flying something different. Try it, you'll like it."

Update 01/08/2021: Removed sheet #3 showing parts templates, at request of Mark Robey, who drew up that sheet. Note see datafile for link to the source file as hosted on RCGroups, which includes sheet #3 with all parts templates. 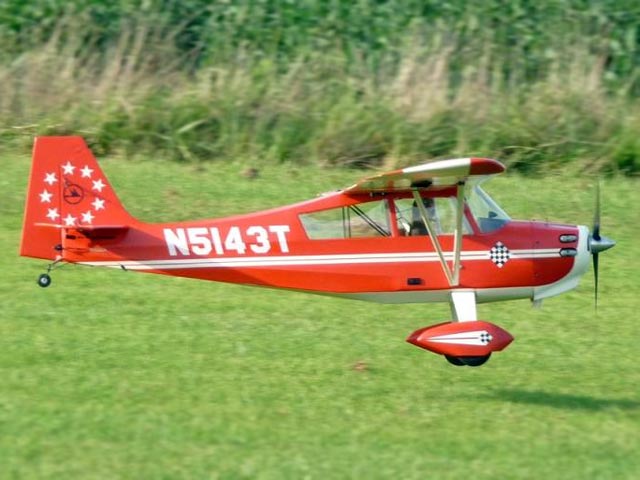 I have this kit. Resist the temptation to 'overpower' this model with a Quadra or DLE. All it 'wants' is a nice .91 four stroke. The construction is robust enough to put in a Briggs & Stratton, but if you build it with modern electric power you could leave out half of the heavy plywood and make a nicer flying 'Champion'. Just 'sayin' LOL.
Jerry - 01/04/2022
Add a comment