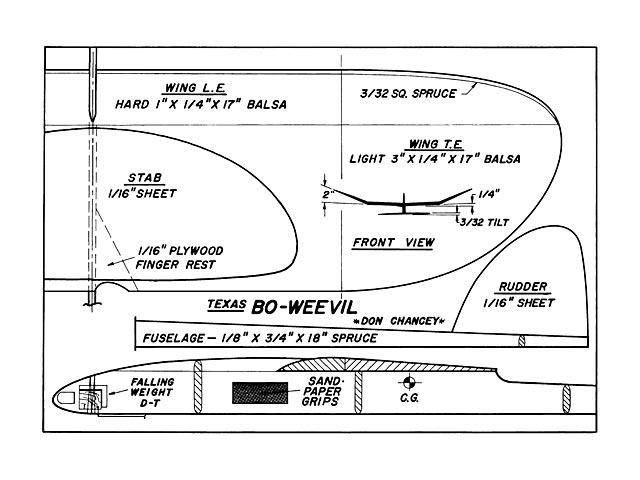 Quote: "Contest Winning HLG for broad range of weather conditions. Can do 60 seconds in evening air from an athletic launch. Don Chancey, with Dick Mathis.

Contest flying with hand-launched gliders is highly personalized. Competition, effort, skill, and rivalry among the top fliers is unparalleled in other free-flight events. Perhaps the reason is that hand-launch gliders call into play all the requirements of other events - trimming, design, craftsmanship, and tactics, plus athletic ability. There are many people who take the event quite seriously, which is ample proof that hand-launch glider flying is highly demanding and re-warding.

The Bo Weevil is a contest glider designed for a broad range of weather conditions. Its impressive record for the last two years includes: first place in Open and second place in Senior at the 1970 Nationals in Chicago; first and third in Senior, fourth in Junior, and seventh in Open at the 1971 Nationals; first in Open at the 1971 Rebel Rally in Florida; and second in Open at the 1971 King Orange Internationals. In addition, there have been numerous high placings at local meets. Frank Perkins, Bud Tenny and I won the 1971 World Team HLG Championship with Don Chancey and his Bo Weevil. I also flew a Bo Weevil for part of my flights, until it was lost OOS, at the 1971 U.S. Free Flight Championships in California where I placed third.

With a good launch and fine trim, the Bo Weevil exceeds 60 seconds in evening air. Some still-air performance has been sacrificed for a high altitude climb and a bouncy, thermal-hanging glide. Anyone can have satisfactory results with this glider for sport or contest flying.

Construction: Select medium light balsa for wing and tail (preferably 'C' stock - little visible grain, mottled appearance). If a four-in wide piece for the wing can be found, use it. Lacking this, a one-in wide front piece with a three-in wide back piece spliced together on a flat surface with the back piece of the lightest balsa will suffice. Supertight wood should be avoided. A glider that is too light (in the case of the Bo Weevil, less than one oz) is worse than one that is too heavy - can't be thrown high. About 1.25 oz is best for most flyers.

Transfer the outline from the plans to the wing by sticking a pin through the plans to make marks on the balsa underneath which can be connected with a pencil. Mark the dihedral lines, too. Treat the marked side of the wing as the bottom so the dihedral break lines can be seen for accurate cutting after the wing airfoil is sanded. Rough carve the airfoil; sand the true airfoil with 180 grit paper and then finish with 400. Follow the same procedure for the tail surfaces.

The dihedral joints of the wing should be cut precisely, beveled for a perfect fit, then glued with epoxy. You may cover the wing with tissue or leave it clear. Don's are covered with black tissue on the bottom and mostly white on the top, which seems to give good visibility. When covering with tissue, regular butyrate dope should be used (Aero Gloss). After covering, the same procedure described below for the fuselage is followed.

The fuselage wood is spruce. Pick the stiffest and straightest piece you can find, round off the edges and sand smooth with 400 paper. Apply several coats of lacquer sealer, sanding with 400 between coats. Apply a final coat of brushing lacquer and rub out with rubbing compound until a mirror-like finish is achieved.

Only one coat of sealer is needed for the tail, followed by a gloss coat of brushing lacquer. Take extra care to fit the finger rest and fuselage grip to your hand. They should allow a very tight grip that is still comfortable. For contest work, a dethermalizer of the type shown is essential. (M & P Enterprises manufactures one.) Add lead or clay on the nose to finish balancng at the point shown. Before flying, permanently bend the back of the left-hand main wing panel down about 1/16 in at the dihedral joint - this will help the model resist spiral diving in thermals. Bend in slight (1/64 to 1/32 in) left rudder tab for left glide circle.

Flying: Test glides should show a flat, slight turn. Toss the model purposely into a stall to check the recovery. Correct poor recovery with up elevator, or continued stalling with down elevator (moisten trailing edge and breath on it while bending). Hard launches should reveal a quarter-turn climb to the right with no snap rolls, spirals, loops, etc. It should just go almost straight up and bank hard to the right as it slows into the glide going downwind.

To obtain a good pattern you may also use stab tilt (to tighten glide without affecting the climb - turns toward high side) or differential deflection of the right or left elevator to create a rolling effect in the climb. Contest fly-ing requires practice so you will not have to think about how to throw or whether the glider is trimmed. You must be free to concentrate on finding thermals. If it is necessary to run down-wind to put the glider under another competitor's which is in a thermal, do so. Watch other models, thermal detectors, flying insects, and anything else that insures launching in a thermal." 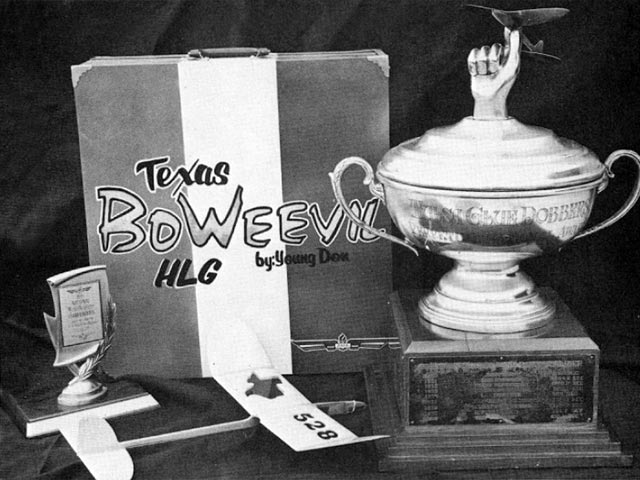 The irony! You do the utmost to shave every excess nanogram from your model, you win a contest and what do you get for your pains? One heck of a cup bigger than your model, heavy like a wrecking ball, and if the insult wasn't enough they added a little launcher hand on top:-)
Miguel - 03/05/2021
Add a comment