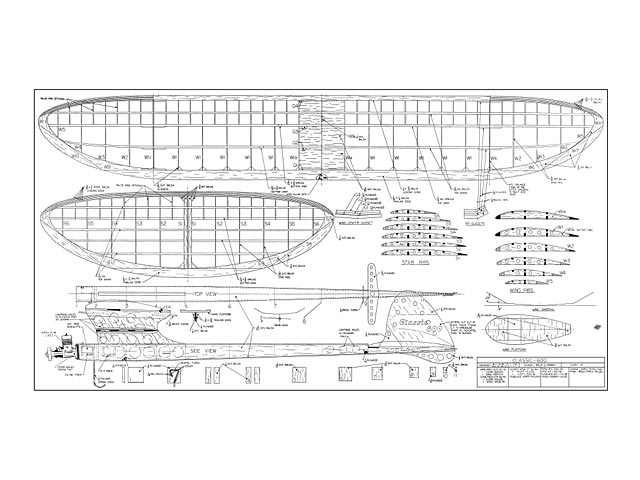 Quote: "The 'Classic', by Bruce Hannah. With charts, sketches, scaling techniques, and clear plans, author tells how to make any-size version of this winning contest gas model - from 1/4A to C.

THE Classic, in the making for several years, has gone through many modifications. It is the brainchild of two Bruces, father and son, along with Dick Schenz who experimented with construction techniques and refinements for pressurizing engines. My son and I were disenchanted at most contests with square wing tips and stabs; deep-bellied, high-thrust, chunky fuselages, so we decided to design a model that could put us in the winner's circle, which would be simple to build, able to fly with few adjustments and, above all, be pleasing to the eye.

I showed a sketch to other modelers. Most of their comments were, 'Boy, that is a Classic-looking free-flight,' hence the name. We built a 1/2A version, and experimented with different combinations of flight characteristics.

The first flight pattern was power to the right, glide to the left. The Classic took three degrees tilt in the stab to achieve the correct amount of glide turn. No side-thrust was needed, but four degrees down-thrust was used to help in the VTO's and prevent looping under power. The recovery was satisfactory, but on friendly advice we tried a flight pattern with both power and glide to the right. The model had a very good transition from power to glide.

The Classic 420 and 500 are using pressure and the Classic 420 also had an auto-rudder. The aircraft can take substantial power without changing its flight characteristics.

The airfoil is a modified Clark Y with a 10% high-point, 35% back from the leading edge. The flat-bottom airfoil was used, first, for ease of construction; second, for a fast climb with a fair glide. The fuselage top was flat and straight, so angles for wings, stab, engine thrust, etc, can be measured.

The fuselage is built by first laying down the top, then gluing on the sides, formers, skid, firewall, and bottom while in this position. When the glue is dry, turn fuselage top up, and slide pylon down into fuselage, and then glue into place, making sure there is plus two degrees incidence to top of fuselage. The fuselage was made to fit the existing 1/2A Cox gastank mount; the bigger Classics fit Tatone beam-engine mounts, without tank.

The stabilizer is elliptical in shape, using a laminated leading edge for easy building and to help subdue warps. Balsa strips are coated with glue, one strip on another, then form-curved around the stab ribs, while glue is wet. Rudder has built-in dethermalizer rubber-band tension hook. Lightening holes are used in such places as plywood, rudder, wing ribs, stab ribs, pylon, etc. Quite a weight-saver.

Epoxy was used in such places as firewall, skid installation, gussets in wing, wing mount. The rest of the model uses Titebond glue. Japanese tissue was used on all versions. Tissue is very light and less likely to warp surfaces as badly as silk or Silkspan, but do not fly in a stubble field with tissue! Eight coats of clear butyrate dope, 75% dope - 25% thinner, were used.

Three types of dethermalizers were used. On the 280 and 350, it is a simple arrange-ment as shown in Fig.1. The spring is about 1-1/8 in long, with a fairly stiff action. This spring takes some tension and vibration off the timer disk, improving timer reliability.

In 1968 the design won the Northern California Free-Flight Council Over-all Gas Championship Perpetual yearly award. At local meets in California, we have won 15 trophies and one National record with our Classics. Two 1/2A Classics and one C Classic have floated off over the mountains, so if you build one, don't forget the dethermalizer lever.

We also enjoy flying rise-off water models, so a standard setup for floats was decided on: 1) front float and, 2) floats on the stab. We used a formula based on front and rear weight in ounces distributed around the center of gravity of the model. It floated beautifully and took off on about 4- to 6-ft runs every time. Bruce Jr, 15 years old, holds the Jr Class B Row record with his B Classic equipped with floats. Total time: 7 min 58 sec.

The first models were built too heavy. We found we could reduce weights by care-fully picking our wood. The wing was reduced from 4 to 2-1/2 oz by using medium balsa wood instead of hard balsa as on the 1/2A Classic. The larger Classics have spruce for the lower two wing spars, hard balsa for the top spars, medium balsa for ribs, and wing tip blocks. The fuselage sides require rock-hard balsa to take rough landings in plowed fields and airstrips on all sizes from 1/4A to C-size. The vertical stabilizer can be soft AAA Contest Balsa. The horizontal stabilizer was best when using soft balsa for leading edge laminations, medium balsa for the ribs, and hard balsa for the trailing-edge blocks; the bottom and top spars should be rock-hard balsa. The pylon for the 1/2A and A should be rock-hard balsa; however, the B and C should be laminated with 1/8 balsa on both sides with 1/8 plywood in the center. Use holes in the plywood, as shown, to lighten pylon.

The tubing must have all sharp edges removed. Be sure no edge of the tubing is touching the dethermalizer string. The X-dimension to the aluminum tubing determines the angle of the pop-up stab. The 420 uses a slightly different pop-up device on the rear of the fuselage, as shown in Fig. 2. Two sizes of brass tubing are soldered together as shown. The 600 and 800 use a slightly different pop-up at the rear of the fuselage, made from magnesium or aluminum..." 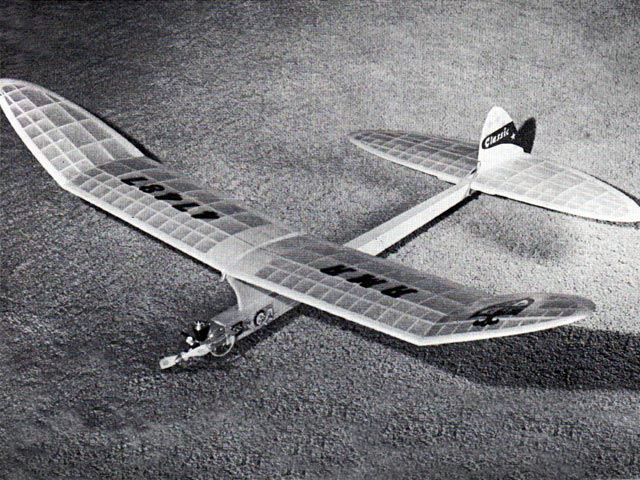