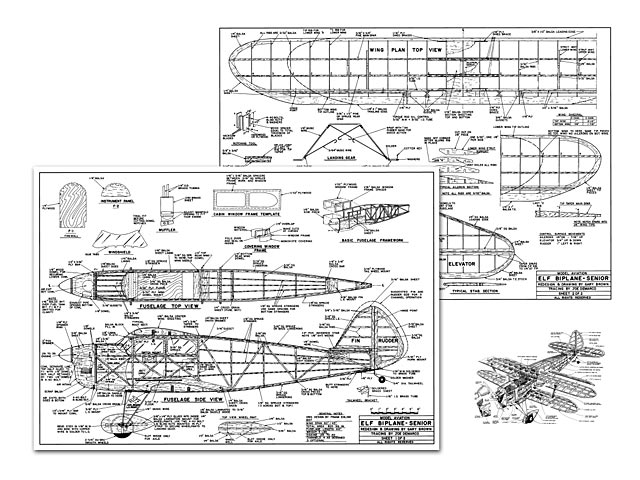 Elf Biplane. This plan is a later redrawn version, it shows RC installation. This is a 60in span version. The original 1938 Frank Ehling Elf Biplane (oz4724) design was 39in wingspan, a free flight model.

Quote: "ONE DAY in the fall of 1976, I decided to browse through John Pond's Old-Timer Plans Catalog in search of a prospective winter project. Among the Bombshells (oz5360) and the Buccaneers (oz5796), one listing caught my eye. It was an Elf Biplane by a fellow named Frank Ehling, a name which most of you will probably recognize and associate with many famous designs. Since I have an affinity for both Old-Timers and biplanes, I thought I would gamble on Mr. Pond's price of $1.50 for this rare combination to find out what an Elf really looks like. Just to be on the safe side, though, I ordered a couple more sets of plans for Old-Timers that I was already familiar with.

When the envelope arrived several weeks later, I was pleasantly surprised. The Elf was a pretty cabin biplane with a 39in upper wing and a shorter lower wing a-la Waco. Its tail feathers were regular Old-Timer fare, and its nose was like a Rearwin. I promptly forgot about the old standby plans I had ordered.

I began to rework the plans for RC and a modern glow engine. At 39 in. it was just about right for an .049 engine and some Ace rudder-only pulse equipment that was sitting on the shelf. The Elf turned out to be a great single-channel flier. With a Cox Golden Bee .049 and a 7x3 prop it would run for about 3-1/2 min and attain several hundred feet of altitude on a good flight. After the engine quit, the Elf was a real floater, even for a biplane. An occasional thermal would noticeably slow its descent.

A couple of years later, I installed a Cox .09 and some small Ace digital-proportional equipment for two-channel (rudder and elevator) control. That turned the Elf into a hot little bomb that would loop and roll - but it could no longer float around in big, lazy circles due to the weight of the additional equipment.

At this point it was clear that the Elf had to be bigger to fly well with multi-channel radio equipment. I set out for a larger version, completely redrawing the plans. I settled on a 60in span for the upper wing and then began to compute all of the important dimensions. Throughout the redesign process, a continuous effort was made to keep the structure light so that an engine in the .29 to .35 range could be used and still retain those easy Old-Timer flight characteristics. I installed an 0.S. .30 in mine, and it has been entirely adequate for this 5lb model. Probably a good Schnuerle-type .25 would also do the job. Do stay away from anything larger than a .40; the Elf doesn't need a lot of power to fly well.

You've probably noticed already that this Old-Timer has ailerons. Because of its semi-scale appearance, I felt that ailerons would not detract from the plane's good looks, and they certainly improve its handling as opposed to the typical wallowing-about in three-channel style. For the conservative Old-Timer enthusiasts, this model could be flown three channel by increasing the rudder and fin sizes and the amount of dihedral in the wings. I have suggested some three channel dihedral figures on the plans..." 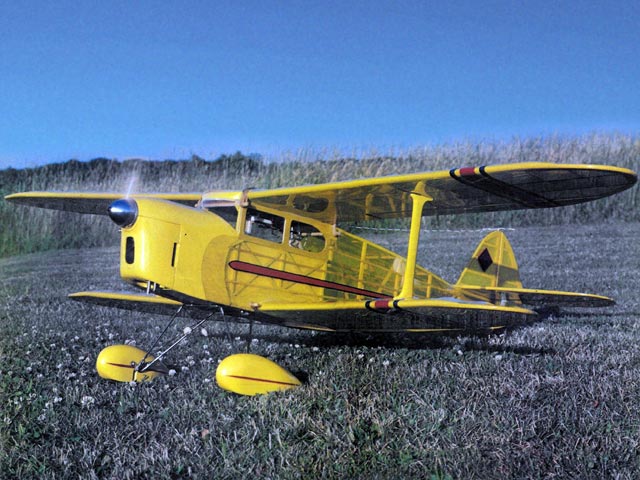 An Elf called Gracie: please find attached photos, as promised, of Elf Senior built from your plans [more pics 004-006]. The model does fly really well on a 30 FS and is named after my granddaughter, Gracie. Many thanks for all the wonderful plans.
PhilipL - 02/08/2018
Hello Phil, Glad you enjoy the Elf. I still have my 60" span version, but fly the smaller, original size very often. That one was converted to electric power several years ago, and is a joy to fly on calm days. I also fly it in the winter with skis. Frank Ehling really got this design right so many years ago.
Gary Brown - 21/03/2020
Greetings Outerzone, Attached is a photo [pic 007] of the original 39" span Elf Biplane as designed by Frank Ehling that inspired me to design and build the Elf Senior as published in Model Aviation, 1984. This model is now 43 years old, has been converted to electric power, and (except for the Rudder and Stab, still wears its original doped, silkspan finish. It gets flown often in the summer as well as the winter using a small set of skies. It's a great little flier!
Regards, Gary Brown, Liverpool, NY U.S.A.
Gary Brown - 21/03/2020
Greetings from Russia! I found your site and thought I might build this model later.Tell me, does it fly well?
Sincerely, mark Lagutin from Russia.
Mark Lagutin - 01/08/2020
Add a comment