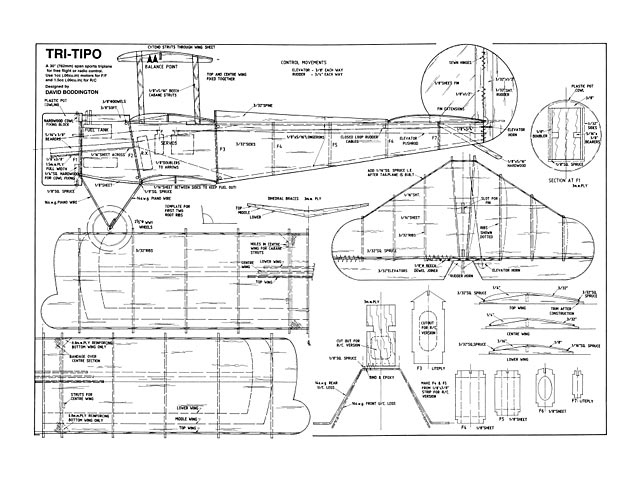 Tri-Tipo. Sport triplane model, for either FF or RC.

Hi Ken, are you busy? No? You are now! That's how the Tipo saga started two years back, when the plan for the original monoplane Tipo was drawn up by El Boddo. It was originally designed for free flight, then tried with first one and then two channel radio, both successful. The Tipo Two came along later, after a bit of Swailes-type nagging, still Jedelsky winged, but a biplane this time. Yet more nagging resulted in Tri-Tipo, which you see here. We may yet see the quadruplane!

KNIFE AT THE READY? ORF WE GO THEN: Do a pair of fuz sides and join them over a line drawn on yer bench (see photo) with built up formers for the R/C version along with the beech bearers at the oily end. At this point, put in the servos and drive snakes/wires/push rods (you choose) and don't omit the drinking straw receiver aerial tube - 288 for 50p from Woolworths, nice and light, plus cheap. Top and bottom bits can now be glued on, with the tank fitted behind Fl and the undercarriage bound and epoxied in position. The front sheeting can go on, after sorting out the throttle linkage.

Wings next: How do I describe something this simple? Just choose stiff lightish wood and you can't really go far wrong. Put the spruce leading and trailing edges on before putting the panels on the ribs as it's easier to sand the bottom of the wing smooth without the ribs in the way. Join the panels with the dihedral braces and bandage the centre sections. Cut the four beech cabane struts, noting that the front ones are a tad longer than the back ones. Cut little `oles in the centre wing bandage but not the top one. Put the wings and struts together dry and hold them together with pins/clips and when you're sure they are nice and square, a spot of cyano will do the job.

Back end: The tailplane is just as easy. Note that the slight double curvature means that the trailing edge strip goes on before the panels are glued on the ribs. However, the leading edge needs to be pinned down later in order to attach the leading edge spruce reinforcement - or you end up with a wavy leading edge (see photo). Glue on the tail end bits and give the whole airframe a couple of coats of 50/50 dope and thinners, followed by paint or coloured lightweight tissue.

Decorate to taste. Fuelproof if you feel like it, but it doesn't really matter if you use a nice oily diesel.

Piece de Resistance. Go to Tesco's and buy a large bottle of shandy, take it home and drink it. Turn the bottle upside down (when empty) and you will see where the ever-so-posh moulded radial cowl on the prototype came from. Cut off about four inches from the bottom and cut out all the
cooling holes plus fuel needle and compression screw access. Rub the shine off with steel wool and spray with silver paint. Bingo! One super, six cylinder radial cowling. My pilot is a 10p dolly from the local flea market.

The motor is a PAW 1.49 with throttle and 8 x 4ins. prop. Fleet gear was used, as usual, with three micro servos and 300mAh battery. There's plenty of room for it if you plan the installation right. Check the balance and control throws. Start with 3/8" each way on elevator and 3/4" each way on the rudder.

Let's go aviating: By this time, the other half of the Boddington/Swailes team of loonies was hopping about all over the place to go out and fly and saying It's only work, but someone's got to do it. Yes, OK Dave, we believe you. Off to the rugby field that they let us use during the week, and Tri-Tipo was launched (after the pics were done), into a stiff breeze. Just a couple of clicks of up elevator trim was needed to trim her out before the flight photos were taken.

Being a triplane, there is a tendency to dutch-roll if heavy handed rudder is applied, but with a bit of finesse, this is not a problem. Reducing the dihedral, for the R/C version, would help reduce the rock and rolling. She will loop and roll happily and the 1/4 throttle hover is amazing. With all those wings, the drag factor takes over when the motor cuts, but the glide is still acceptable and three-pointer landings with a touch of flare-out are a regular occurrence, even with Boddo on the sticks!

PS. If anyone points out that six cylinder radial motors are a no-no, an 8 x 6 prop inserted in his ear 'ole will sort the problem out and encourage him to go and pick on someone else. Guaranteed." 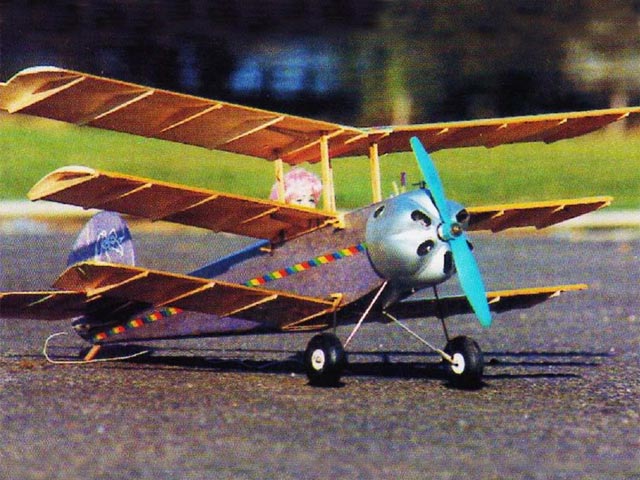 An amusing model, pop bottle and all, the only special material needed is pre-warped balsa for the Jedelsky wings :-) Thank you Master Boddo, and my regards to everyone up there!
Miguel - 02/05/2021
Add a comment