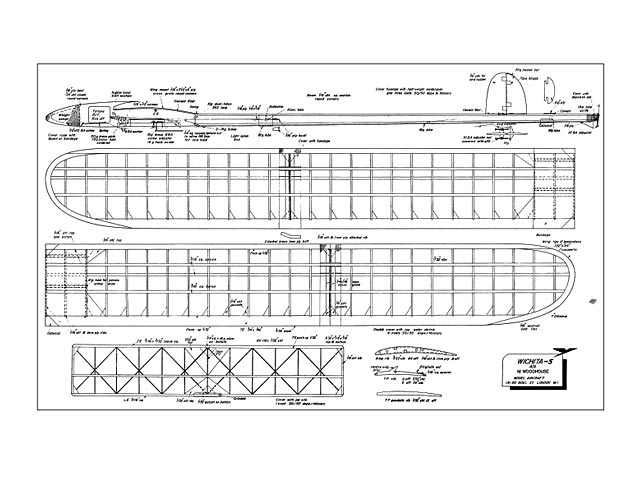 Quote: "THE Wichita A/2 series commenced in the summer of 1961. I decided, after placing very low at the 1961 team trials that I needed a better A/2 than those I was flying at that time if I was ever to have any success. A week or so after the trials I gained an unexpected five weeks of building time through a motorcycle accident. Thus I had time to design and build the Wichita 1. The design proved a success from the start being easily trimmed out in one evening and having a performance in excess of all the Norwich Club A/2s of that time.

The only major design change found necessary was the reduction of fin area - the previous fin causing, at times, rather nasty turning tendencies in strong lift and wind. The main development since has been to make a better contest model.

The original, though an extremely good performer, required several small improvements before it became a good efficient contest machine. Here I must thank all the other members of the Norwich club for their hand in development by building some 15 or so copies and developments. By this means many small points have been improved quicker. The only drawback - to my discomfort - being regularly beaten by my own design, much to the amusement of clubmates!

The structure and details of the design have been gradually improved and is now capable of taking all that can rightly be expected of it.

Contest success has spread to all those who built the design. Since 1961 Wichita has been in about 20 fly-offs and won 40 to 50 contests. One notable success that shows that the design goes well for anyone was the win by the Wichita-equipped team in the team glider in 1962.

Construction: Construction is fairly simple and straightforward but an explanation of some of the slightly unusual points might help.

Wings: The tips are laminated from 12 strips of 1/32 x 3/8 soft balsa using 'Cascomite' and fixed around a former to dry. When dry they are trimmed to fit the main tip structure. The TE is left blunt 1/8 in) and is of very hard wood for the centre panels, the LE is also of hard stock. Slight washout is built into each tip (1/16 in) to help prevent tip-stalling. The end tip ribs are standard ribs cut down to size and finished to suit the final tip shape. The wing is double-covered with jap tissue and given four coats of 50/50 dope/thinner. Failing the availability of jap tissue, heavyweight modelspan would be suitable.

Tail: No important points except that the ribs are slotted to receive the spar when all are in place - and the usual admonition to keep it light!

Fuselage and Fin: The towhook assembly should be carefully made and the runners fixed as securely as possible as this unit is subjected to quite heavy loads on tow. Keep the fuselage boom light but sufficiently strong through careful selection of material. All the screw adjusters should be carefully silked and cemented in place.

Trimming This is extremely easy, provided the model follows the plan and is warp-free. Adjust the rudder to about 3/16 in to 1/4 in for glide turn, and tow straight up on a full line using a 20 sec D/T. Hand launching is not necessary - I've not hand launched a glider for about three years.

The final trim adjustment for best performance is a fairly open turn, which tightens in lift, and a longitudinal trim about lit in. under the stall in calm conditions. Tow hook should be adjusted until the model is just short of weaving. One tip: adjust the model's glide turn opposite to any rudder on tow. This will improve consistency." 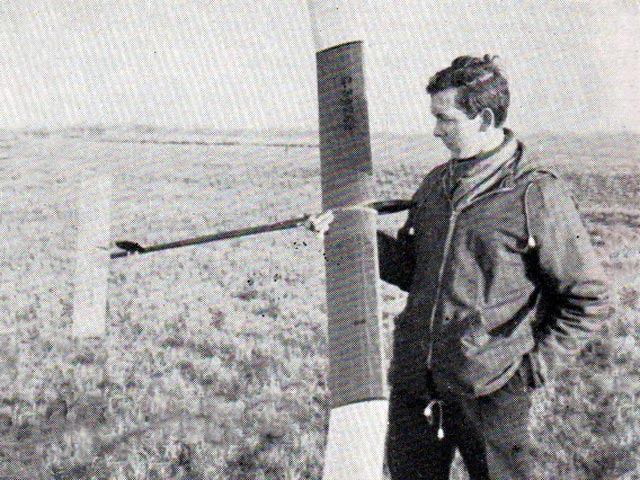