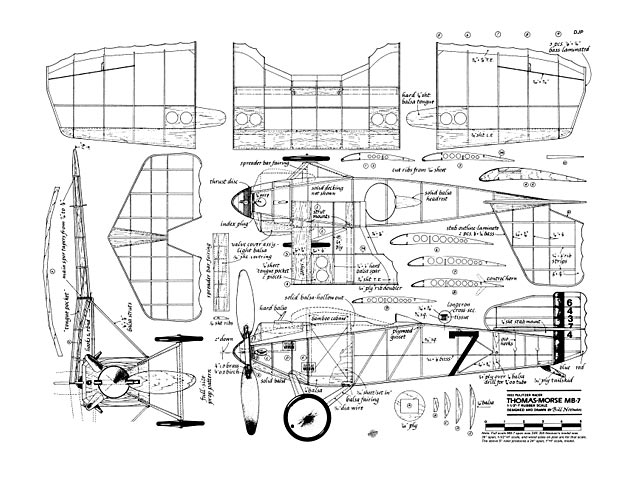 THE SUBJECT AIRCRAFT was developed as part of a contract with the Army Air Service for construction of 265 Thomas-Morse MB-3 pursuit aircraft. It represents innovative thinking in airframe design immediately after World War I, yet it reflects some of the naivete that prevailed at that time regarding aerodynamics.

In July of 1921, the Marine Corps was interested in competing in the Pulitzer Races, and it processed a request, through the Army, for the development of two aircraft out of the contract of 265 MB-3s which would be suitable for racing. The highly-involved inter-service paperwork which was necessary has caused great confusion among aero historians. About the only tangible evidence of the Army's involvement is the number, 64374, which appears on the second MB-7's rudder.

The Thomas-Morse company had become intrigued with the experiments and ostensible successes by the British Martinsyde company with their 'Alula' wing principle, and decided to incorporate it in the design of the MB-7. Thomas-Morse maintained the curious humped center-section in their design, but increased the thickness and chord, thereby making a substantial change in the basic British concept.

The first MB-7 showed promise, achieving a recorded speed of 180 mph before crashing during a 1921 Pulitzer Race because of a broken fuel pump spring. Pilot Harold Hartney, a much-decorated survivor of World War 1, managed to set the plane down in a brush-covered gully near Honey Creek, IA - but not without major damage to the aircraft and injury to himself. While recuperating in the hospital, he learned with great sorrow that the remains of his mount had been consumed by fire, the result of a careless souvenir hunter's cigar being dropped in the gasoline-soaked debris.

The second MB-7 number 64374 was delivered to the US Marine Corps in January of 1922. It was assigned race number 7, and it was flown in the Pulitzer by pilot Pat Mulcahy. An overheated engine forced the little silver racer from competition, and it was quietly put in storage in Philadelphia until May of 1925, at which time it was stricken from the Navy inventory. It had logged only a little more than 5-1/2 hours of flight time in its undistinguished lifetime.

The MB-7's shortcomings were not with design, but (as it was with many promising aircraft of the early 1920s) the lack of reliability of the power plant. The pressure of competition, coupled with relative ignorance of metallurgy and engine limitations, caused unfortunate and wasteful results. These factors conspired to cut short the career of the Thomas-Morse MB-7.

Fuselage construction: Before starting, it is best to cover the plans with Saran Wrap or wax paper to prevent surplus cement from adhering the structure to the paper.

Start by laying laminated longerons in place over the side view. Be sure the 1/20 x 3/16-in component is positioned correctly to allow tissue covering to be cemented along the 1/20 edge later on. The tissue will not touch any of the upright structure except at both ends of the fuselage. Cut and cement 3/32 sq uprights and diagonals in place. Cement the basswood 1/32 x stringer in place along the fuselage center-line, starting at the station immediately in front of the cockpit and working aft to the tail post.

Cement hard 1/16 sheet balsa parts in place on the bottom longeron between the front and back landing gear legs. These act to reinforce the fuselage bottom at a critical stress point. They also act as an anchor plate for wing struts. Add the 1/64 plywood crescent-shaped gusset to the top longeron behind the cockpit.

Construct the right fuselage side in the same manner, with the tissue-bearing surfaces of the longerons in the correct position. When the two fuselage sides are completed, cut the 3/32 sq crosspieces... "

Quote: "Steve & Mary, Here's the plan and article for Bill Noonan's Thomas-Morse MB-7 racer rubber-powered model. I've had this in mind since it was published in October, 1985, "Model Aviation" magazine and periodically failed to decide what size or power I'd aim toward. My Gosh, 35 years of procrastination! My present thoughts are for 48" span (2"=1' scale) RC with an OS .26 four-stroke - or maybe brushless electric, but I sure like the sound of a 4-stroke. 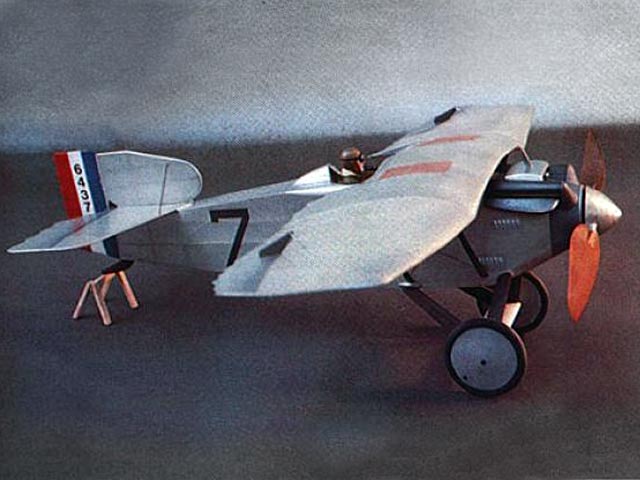 I tend to have a penchant for less-than-beautiful airplanes - to apply a thin layer of kindness varnish - but this combination of form, interference, and parasite drag would already be hard to swallow but then lunacy decided this might pass as a racer! Finally, the prototype went up in flames propelled by a cigar!
How can one not love a little bird with such a rich story like this one has, even if reality cut it short and propelled it into obscurity?
Besides, this is another Bill Noonan plan, and I could have written that in the first place!
Miguel - 29/04/2021
Add a comment