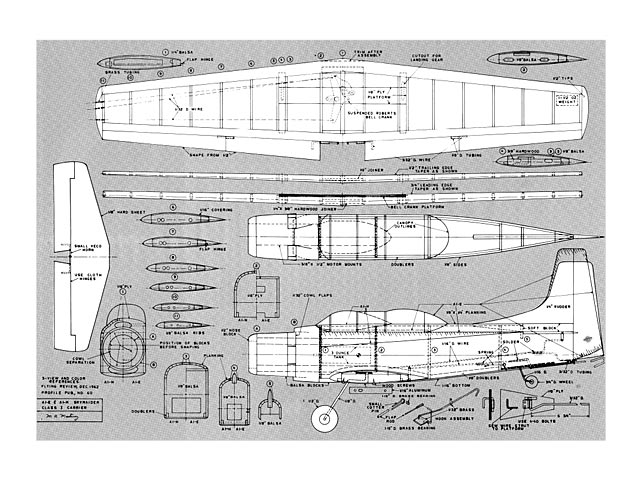 Quote: "Skyraider A1-E and A1-H, by MR Martinez. Two versions of the famous Skyraider for the Navy Carrier event in control line - you take your pick of greenhouse or bubble canopy version!

Aviation enthusiasts should already know the story of the Skyraider. Several excellent books, including Profile's publication, have been written about this exceptional airplane. Therefore, what I have to say about the Skyraider is a retrospective outline of its development and operation.

The design began in 1944 as a replacement for the SBD Dauntless. The early prototypes had little resemblance to today's airplane. The XBT20-1 was the first version to have this appearance. At this time they were named Dauntless II. Not until 1946, was the designation of the then present model BT2D renamed Skyraider.

The Skyraider first entered service with the peacetime Navy. At the same time, Martin's AM-1 Mauler was the Skyraider's closest competitor. But due to the Navy's further cutbacks, the Mauler was eventually phased out.

Soon after, the Navy renewed its interest in the Skyraider. Several different versions were introduced during this revived interest. Starting with the AD-1, production extended on through the AD-7. The AD-3E, AD-4W, and the AD-5 were versions that receiv-ed major changes in appearances. An enlarged cockpit was designed, providing a side-by-side seating arrangement for the pilot and radar operator. The main mission of these versions was to provide fleet radar coverage and anti-submarine Hunter-killer missions.

After the Korean war, interest continued with the Navy for the Skyraider. Along with its attack capabilities, the plane was used further for early warning, countermeasures, and night attack. They were also used as tankers for in-flight refueling and others for testing of new ordinance weapons.

In 1957, the last Skyraider version, AD-7, rolled off the assembly line. The total production was 3,180 aircraft with 28 different versions.

However, the Skyraider's story was still to continue. With the entering of the United States into combat in Vietnam, the Skyraider was to see more action under the designations A-1E and A-1H. Again the Skyraider showed its exceptional qualities, including the ability to fight alongside jet propelled aircraft. Eventually, however, Skyraider operations gradually came to an end as the introduction of jet attack aircraft such as the A-6 Intruder and the A-7 Corsair II took over. By 1967 the transition to jets was completed. The Skyraider's career was really over. A final tribute was given to the Skyraider by the Navy in the form of a special citation. One of the last A-1H's was placed on permanent display at the Naval Air Museum, Pensacola, Florida.

My model of the Skyraider goes back several years also. In 1966 class I carrier was a brand new event. Profile carrier was also started as a first step beginners' event before getting into scale carrier. I don't believe this process ever occurred. The beginners in profile simply became experts in profile. The beginners in scale carrier eventually became experts in their respective classes. Only a few of us really made the change over to scale. As far as I have noticed, it's still very much that way.

At any rate, back to the Skyraider model. At that point in time, there were two main airplanes used for scale. There was the Mauler for Class II, for the reason that it was the only kit available. For class I it was the Guardian because it was the only one that had plans available. Since then the Guardian has emerged as the most popular plane in both classes. This popularity is well founded since it is an ideal subject for scale carriers even though there have been several new kits and plans for other carrier aircraft.

So, why build the Skyraider? My original purpose in choosing it was because everyone else had Guardians. But over the past years I have discovered that the Skyraider is just as good as the Guardian as far as flying is concerned; and also has a few structural advantages. The tail is stronger in case of nose overs, and the low wing allows the tank installation to be no problem. This also allows the engine to be mounted sideways which helps keep the airplane out on the end of the lines. And, finally one of the really nice aspects about the Skyraider is its wide variety of scale color schemes. It does not have to be just another blue blob.

The real test of any competition airplane is at contests. Ever since its first contest in 1966, my Skyraider has missed only two or three times winning a trophy. This is averaging at least six contests a year.

Some two years ago, a close friend of mine, Larry Stephens started flying the Skyraider also. He has experienced just as much success. At most contests we have been each other's main competition, with nature's little gremlins being the ones to determine which wins first or second.

Larry uses a K&B .40 R.R. I have been using a Super Tigre G-21 .40 R.R. Both of our engines are equipped with Bill Johnson's fuel meter and throttle. With the new and more powerful R.C. engines and the rule change that equalizes high and low speed performances, I believe just about any reliable engine would be competitive.

Due to the ease of construction, excellent flying characteristics and a long and successful career, my opinion is that either beginner or expert alike would be very satisfied with his own Skyraider.

The drawings show the original construction of 1966. Only one modification has been made on the present Skyraider. The firewall has been moved back to accommodate a fuel meter and all its extra linkages. It is now even with the front edge of the wing.

Before starting construction decide which version of the Skyraider you want. Except for the appearance, there is no advantage of one over the other. The canopy for the AI-H can be readily found. Sig makes one that works excellently. If you are not capable of molding your own, I can supply you with one for the AI-E version. I personally prefer the E version as I believe it is more distinctive.

Whichever version you choose, construction starts with the wing. Shape the hardwood landing gear ribs, #4 on the plans. Drill and rout them out fbr the landing gear. The left one also needs holes for the lead-outs. Cut the bellcrank platform from 1/8 plywood. Drill the holes for the J-Robert's bellcrank. Note that an inverted, cut-down version is used.

Mark the position of the ribs on the platform. Secure it flat on a table and epoxy the ribs on upside down. This can be accomplished directly over the plans if desired, just remember to switch the ribs around and that the bellcrank holes are on the right side. Also, be sure to cover over the plane with Saran Wrap or a similar material..." 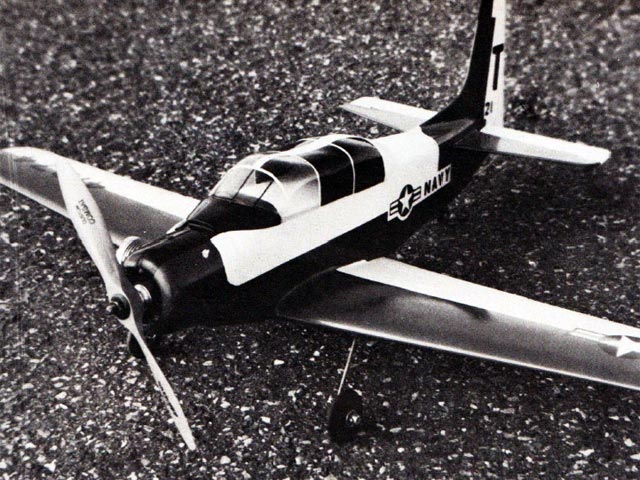