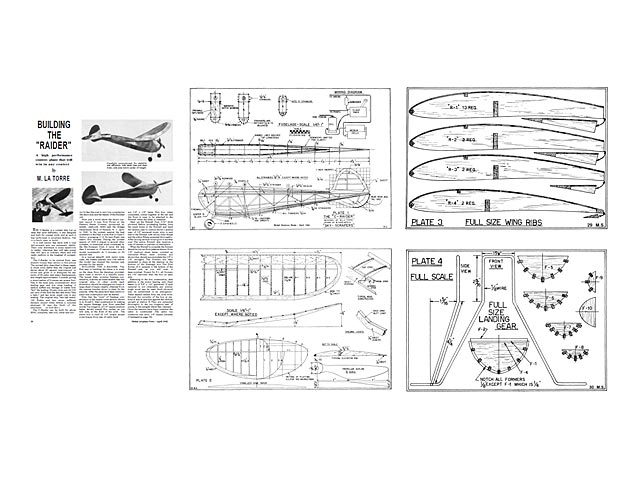 Quote: "THE C-Raider is a contest ship. Let us state that most definitely, it was designed and built for contest work, and as such it has performed in excellent fashion. Yet it is fairly easy to build.

It is well known that ships with a long tail-moment arm are extremely stable. Their only drawback is some sensitivity in rudder, otherwise they will take power that will spin in ordinary ships and will really perform in the toughest of competition.

The C-Raider, in its original form, was slightly longer than shown in this article. The revised ship, described in these pages, is much more stable than the original and shows about 20 percent improvement in climb and glide. It is designed for any motor of 60 cubic inch piston displacement, and weighs approximately 3 pounds, giving a wing-loading of 8 ounces per square foot. Due to the large area, comparatively short landing gear and low wing loading, it seldom suffers any damage no matter how 'hot' the landing. Ninety-nine percent of the time the ship sets down like a baby, and has never nosed over in any landing. The original ship has had nearly 100 flights and has never suffered damage except when hitting a concrete abutment (It was the fault of the abutment - no kiddin'.)

The C-Raider can be built for about $3.00 complete, less coil, timer and motor. In fact the cost is very low considering the ship's size and the beauty of the finished job.

Now just a word about the ship's contest record It was first flown at the Eastern States Contest, sponsored by MODEL AIRPLANE NEWS and the Kresge Department Store of Newark NJ, early in 1940. In the contest, against the best modellers in the East, it took first in Class C Junior, averaging 2:12 Its best flight was nearly five minutes. During the contest season of 1940 it placed in several other contests, in measured trials conducted by the Sky-Scrapers Club, it never did less than 2 minutes on 15 second motor runs It would consistently do 3 minutes on 20 second runs In a typical takeoff, with motor wide open, the wheels scarcely turn over before the model has cleared the runway and pointed for the zenith.

BUILDING THE C-RAIDER: The first step in building the plane is to scale up the plans from the drawings provided; each plate is shown in a specific scale. The largest plate, covering fuselage construction, is shown six times smaller than the original ship, In other words each dimension should be enlarged six times A large sheet of paper (readily obtained from the nearest butcher shop) is ideal for the purpose. After the plans have been drawn to exact size construction may be started.

Note that the 'core' of fuselage construction is the square cross-section shown in A, B and C. Start construction by making the square fuselage core from specified woods. Top longeron, of 1/4 in square medium balsa, should extend five inches, as you will note, to the front of the cowl. The entire box is built of 1/4 in square, except cross braces from rear of cabin back are 1/4 x 1/8 balsa. This box, when completed, comes together at the tail and the front is open to be attached to the firewall when the latter is installed.

Next cut the firewall from 3/16 birch plywood. Before proceeding further, bore the small holes in the firewall and bend the landing gear to outline shown Landing gear, of 1/8 in tempered music wire, is next tied to the firewall with strong linen thread and the entire fitting cemented thoroughly. After drying several hours give it another coat. The entire firewall also receives a coat of cement, to prevent oil absorption.

When the firewall is complete the formers should be cut out from patterns shown, from 1/8 medium sheet balsa, notched as indicated. When deep notches are shown they should accommodate the 1/4 x 1/8 stringers The formers are then cemented in place at the stations on the bottom of the fuselage box The first former (F-1) cements to the bottom of the firewall and, as you will note, is deep-notched. Except for F-1, all formers are 1/8 in narrower than the box on each side.

Returning to the box construction, next addition is the motor bearing unit. Each bearer is of 5/8 x 1/4 gumwood. If such material is not obtainable any similar tough wood may be used: birch plywood may be substituted in an emergency. These bearers extend from the cowl front, through the uprights of the box at stations A and A' and butt against the vertical upright at station B. They are cemented thoroughly to the top longeron and, of course, to the uprights which they intersect..." 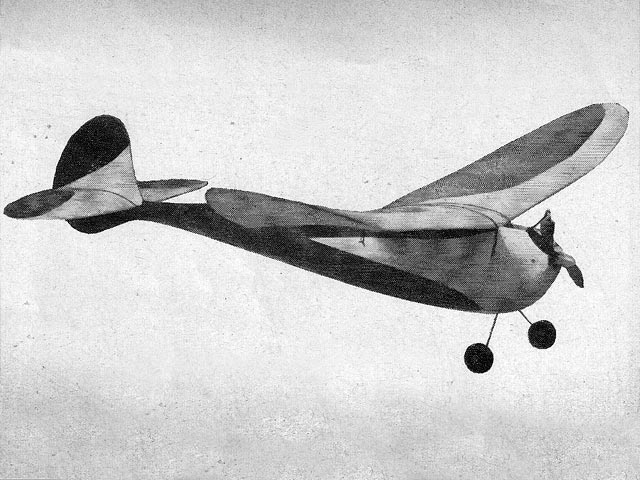 I suspect some scaling up of the plan would be required to enable a successful flight with "any motor of 60 cubic inch piston displacement" as claimed in the article!
Skippy - 25/04/2021
About the .60 engines: they weren't piped Rossis those days. Probably they had at least twice the weight and less then half the power of an average modern engine, I guess.
Hubert - 26/04/2021
Add a comment