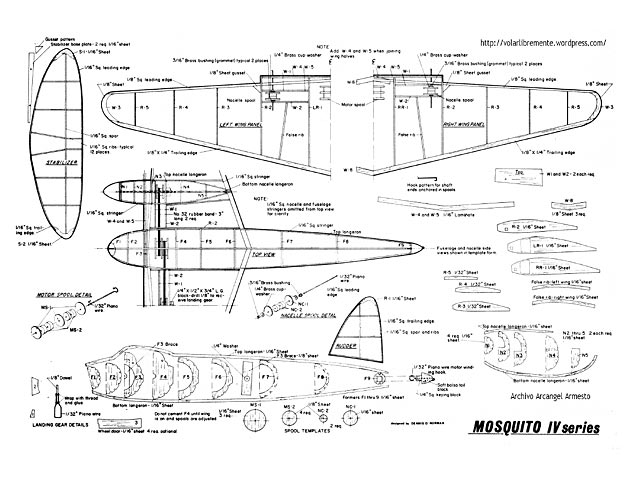 Quote: "If you're tired of the conventional wind-up-and-go, this unique twin-engined rubber-powered scale version of the famous World War II bomber is your plane. It sure is different. Mosquito IV Series I, by Dennis Norman.

One of the immortals of World War II, the de Havilland Mosquito revolu-tionized bomber concepts of its day. Built almost entirely of wood and carrying no defensive armament, its speed was equal to or faster than that of contemporary fighters. Indeed, the speed and maneuverability of the bomber prototype was so remarkable that a fighter version was also built.

This model is based upon the first bomber variant flown in 1941. Built rugged but light this plane flies fast and low. Flights in calm or slightly breezy conditions average 40 yards or better with the model seldom rising higher than ten feet. She's no endurance champ and loops are out of the question, but properly trimmed this model flies well enough to make you proud to own her. Study the plans and construction notes carefully before you begin building.

Using a piece of 1/32 inch wire as a guide, assemble the motor spool by sliding one 1-1/8 inch circle (1/16 sheeet) and two inch circles (1/8 sheet) onto the wire. Glue these three circles together while on the wire. It is critical that the spool be properly aligned so be sure all the circles are at right angles to the wire and that the 'spool' does not wobble when rotated.

You now should have two sandwich-like pieces of balsa, each with a piece of wire passing at right angles through its center. Complete the assembly of the motor spool by cementing the two halves together. Twirl constantly to be sure that the wire shafts are properly aligned - when they are, neither one will wobble when the spool is rotated. Set the motor spool aside to dry. 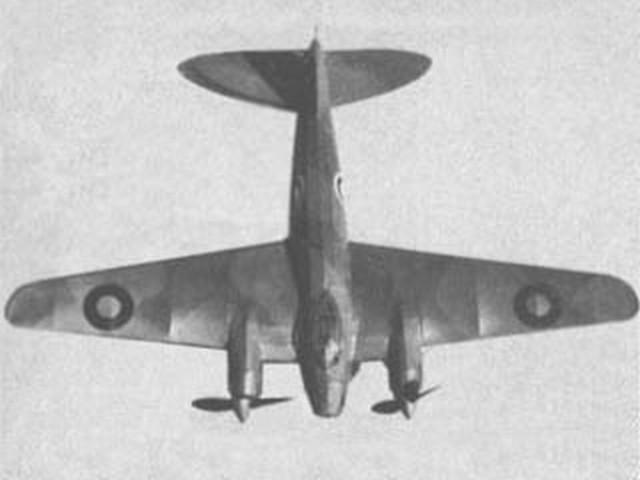