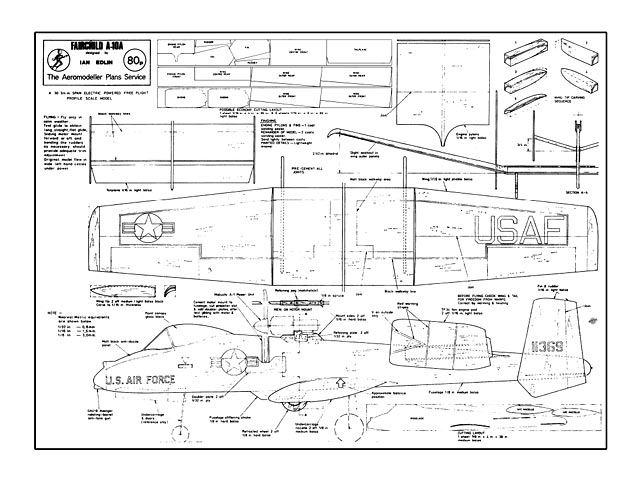 Quote: "A profile-scale free flight model of an unusual prototype, designed for use with the Mabuchi A-1 electric power unit by Ian Edlin.

THE FAIRCHILD A-10A was the winner of the recent USAF AX competition for a heavily armed ground support aircraft with a long endurance, low noise level and the ability to make very tight turns at low altitude.

This requirement was brought about by the Vietnam war where these duties were often carried out by older types, such as the Douglas Skyraider. In particular the A-10A carries a larger, specially developed, anti-tank gun and the pilot is protected by heavy armour plating while having an exceptionally good view from a bubble canopy well ahead of the wing. Quiet and economical General Electric TF34 fan engines are placed out of harm's way, high up on the rear fuselage.

The model is based on the prototype A-10A which I feel is a prettier shape and more decorative than production aircraft, However, I have 'borrowed' from later machines an under fuselage strake just ahead of the wing to add depth to the fuselage at the propeller slot position.

The barely adequate tailplane area is effectively increased by the engine pylons, while the combined area of twin fins and profile fan engines more than offsets the large frontal side area of the fuselage. The vortex tips (which are easier, to make than they look) and undercarriage fairings, serve to maintain the wing camber and could be supplemented by underwing stores pylons if desired - weight permitting. The motor position is safe, eliminates the need for downthrust and both tailplane and fins are reasonably clear of the propeller slipstream. As the motor mount can be slid fore and aft on the fuselage during test gliding, trimming is simplified and no additional weight is required.

To obtain a good performance, weight must be kept as low as possible, so the balsa must be carefully selected for light weight, consistent with sufficient strength to prevent undue flexing in flight. The wood for the fuselage in particular should also be checked for straightness.

Begin construction by cutting out all parts, taking care that the grain direction is correct. On the wing, tail and pylons the grain runs parallel to the leading and trailing edges. The lengthwise joints can now be made on a flat surface, followed by lightly sanding, and radiusing edges where necessary. Applying dihedral to the engine pylons is begun by first cutting one joint, bevelling the edge and joining. Then when the cement is dry, repeat the process for the second joint.

Slide the wing centre section, tailplane and engine pylons through the fuselage and cement carefully, checking alignment. The undercarriage nacelles can now be added, followed by the wing outer panels, engine pods, fins and finally the wing tips. The wing outer panels must be carefully trimmed to give the correct dihedral and avoid distortion while the pylon ends are bevelled to accept the engine pods.

Make up the motor mount by cementing the balsa sides to the spruce core and screwing the plastic mount in place.

If flight tests show that additional weight can be carried, an undercarriage, bombs or more paintwork could be added. The undercarriage position is indicated on the plan, as are also the prototype USAF markings. I believe 11369 was painted gloss light grey. Humbrol enamel could be used but beware, the weight could make the model a poor flier.

My own model carried one coat of thinned Humbrol cellulose sanding sealer on the fins and engine pylons and two coats on all other parts (plus the lower ends of the fins). The first coat was lightly sanded with worn fine glasspaper just sufficiently to remove the roughness.

In the case of the fuselage and engines, both coats were applied and painted details added with Humbrol enamel before final assembly. However, in the case of the wing and tailplane, only one coat was applied before final assembly. In this way the black walkway lines could be applied while the parts were flat on the workbench. This was done with drawing ink applied by means of a pen and straight-edge, the sanding sealer preventing the ink from soaking into the balsa.

At this stage the wing camber was applied by warming in front of a fire (not too close) and bending gently. The second coat of sanding sealer, applied to the wing and tailplane after assembly, prevents the ink washing off in damp flying conditions and helps maintain the wing camber.

All joints should be pre-cemented if balsa cement is used. This will, for example, make the attachment of the wing outer panels much easier, as an immediate bond is obtained. The joints should later be re-inforced by apply-ing a small bead of cement and then quickly smoothing this into a small fillet with a single stroke of a finger.

Before test flying, check that the wing and tailpalne are free of warps and correct if necessary by twisting in the opposite direction in front of a fire (again not too close) and holding twisted until the wood cools. Check also for correct alignment of parts as viewed from front or rear of the model. An additional fillet of cement will shrink over a period of time and can be used to pull parts back into alignment, but squarely cut joints and careful assembly should make this measure unnecessary.

The slot for the propeller should not be cut until satisfactory test glides have been obtained with the motor and batteries in position. Carry out test glides on a calm day, preferably down a slope and into the wind (if any). Slide the motor mount back or forth until a long flat glide is obtained and bend the rudders to correct any turning tendency. Mark the motor mount position and go home! Do not be tempted to complete the model on the flying field.

The prop slot can now be cut and the motor mount and fuselage doubler plates can be cemented in place.

Test flights have shown that in the event of a hard landing or collision, the motor can slide off its mounting and damage the forward fuselage. A simple retaining device consisting of two pieces of ply and a removable peg (matchstick) is shown on the plan and should prevent such mishaps.

The original model flies in a wide left hand circuit, climbing realistically on the initial power of a near full charge, then levels off for a steady cruise followed by a gradual descent and gentle landing. A most satisfying and relaxing experience, and one you should not miss." 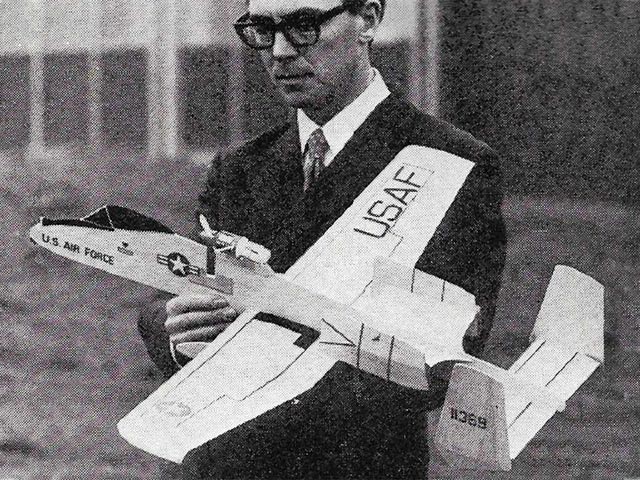