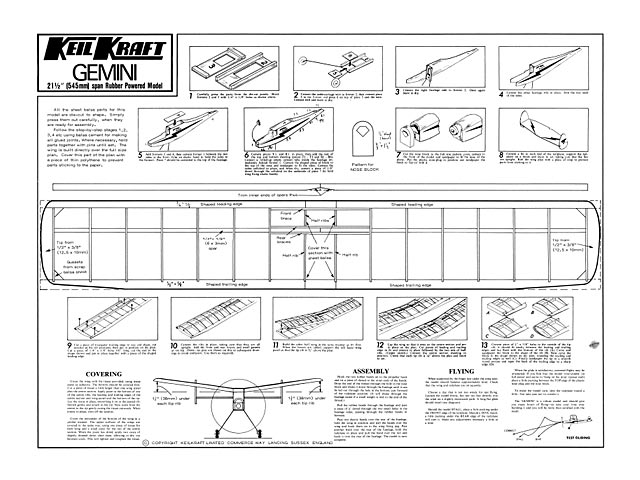 Note the fuselage is not shown in detail on this plan. The kit included fuselage parts die-cut and ready to assemble - see steps 1 to 7 of the instructions on the plan sheet. This is the complete plan, as supplied in the kit.

Quote: "All the sheet balsa parts for this model are die-cut to shape. Simply press them out carefully, when they are ready for assembly.

Follow the step-by-step stages 1,2, 3,4, etc, using balsa cement for making all glued joints. Where necessary, hold parts together with pins until set. The wing is built directly over the full size plan. Cover this part of the plan with a piece of thin polythene to prevent parts sticking to the paper.

2. Cement the undercarriage wire to former 2, then cement piece 5 to the former and piece 6 on top of piece 5 and the wire. Cement well and leave to dry.

3. Cement the right fuselage side to former 2. Once again leave to dry.

4. Cement the other fuselage side in place. Join the rear ends of the sides.

5. Add formers 3 and 4, then cement former 1 between the two sides at the front. (Use an elastic band to hold the sides to the former). Piece 7 should be cemented to the top of the fuselage.

6. Cement pieces T1 and B1 in place, then add the rest of the top and bottom sheeting (pieces T2 - T3 and B2 - B6). Cement a rolled-up empty cement tube inside the fuselage immediately behind former 1. Cement the shaped piece of block to the top of the nose and sandpaper to fit the sides. Cement the cabin celluloid in place, and when dry, cement a piece of 1/8 dowel through the celluloid on the underside of piece 7 (to hold wing fixing elastic bands).

8. Cement a fin to each end of the tailplane, support the tailplane on a block and leave to set, taking care that the fins are upright. Rub the wing plan with a piece of soap to prevent parts from sticking to it.

9. Cut a piece of triangular trailing edge to size and shape, cut notches at the rib positions, then pin in position on the plan. Cut a piece of 1/4 x 1/8 balsa 10-1/2 inches long, cut the end to the shape shown and pin in place together with a piece of the shaped leading edge.

10. Cement the ribs in place, taking care that they are all upright. Add the front and rear braces and small gussets at the tip. (Note: no pins are shown on this or subsequent drawings to avoid confusion. Use them as required).

11. Build the other half wing in the same manner as the first. When the braces are added, support the left hand wing panel so that the tip rib is 3-1/4 in above the plan.

12. Lay the wing so that it rests on the centre section and pin in place on the plan. Cut pieces of leading and trailing edge to fit and cement in place followed by the two sets of half ribs. (Upper sketch.) Cement the centre section sheeting in position. Check that each tip rib is 1-1/2 in above the plan and leave to set.

13. Cement piece of 1/2 x 3/8 balsa to the outside of the tip rib, it should fit neatly between the leading and trailing edges and lay flush with the bottom of the rib (A). Carve and sandpaper the block to the shape of the rib (B). Now carve the block to the shape shown on the plan, rounding the leading and trailing edges as well (C). Finally sandpaper the tip to a smooth round section and taper the back of the trailing edge to a sharp edge (D).

COVERING: Cover the wing with the tissue provided, using tissue paste as adhesive. The bottom should be covered first. Cut a piece of tissue a little larger than one wing panel plus the centre section. Apply paste to the bottom of one of the centre ribs, the leading and trailing edges of the centre section and wing panel and the bottom of the tip. Lay the tissue in place, smoothing it on to the pasted rib. Stretch gently and attach to the tip. Now work from the centre.to the tip gently easing the tissue outwards. When evenly in place, trim off the surplus.

Cover the remainder of the bottom of the wing in a similar manner. The upper surfaces of the wings are covered in the same way, using one piece of tissue for each wing and a small piece for the top of the centre section. When the paste has dried, apply two coats of slightly thinned down clear dope, allowing to dry out between coats. This will tighten and toughen the tissue.

FLYING: When supported by the finger tips under the wing spar, the model should balance approximately level. Check that the wing and tailplane are on squarely.

Choose a day that is not too windy for test flying. Launch the model firmly, but not too fast directly into the wind on a slightly downward path. A long flat glide should result (see diagram).

When the glide is satisfactory, powered flights may be attempted. If you find that the model 'over-climbs' on full power and seems to 'hang on the prop' (power stall) place a little packing between the TOP edge of the plastic nose plug and the nose block.

To make the model turn, slew the tailplane round a little - but take care not to overdo it.

The 'GEMINI' is a robust model and should give you many hours of flying - so take your time over building it and you will be more than satisfied with the result. " 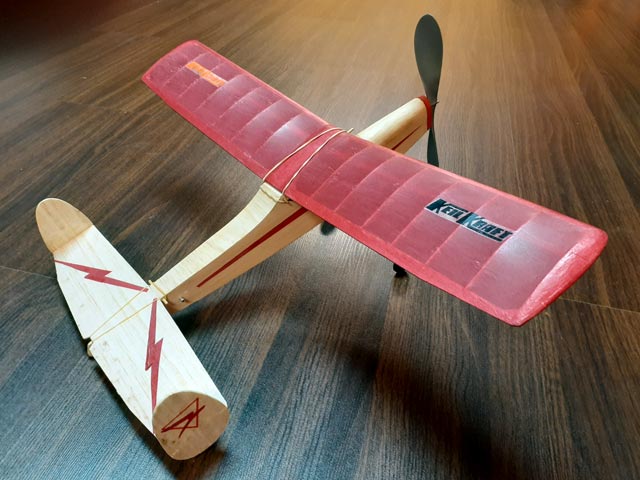