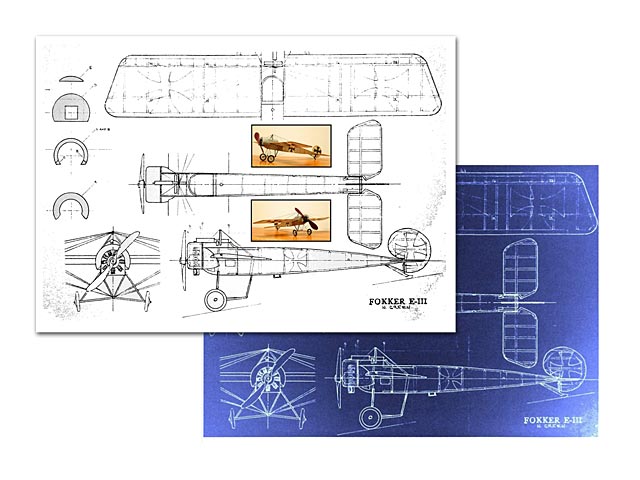 Quote: "It has arrived…the “Fokker Scourge”…rendering all before its guns to be “Fokker fodder.” The Fokker Eindecker was Imperial Germany’s response to the Aeronautique Militiaire Morane Saulnier Type N (oz11544)…not exactly a “windrush” Miguel…I constructed this peanut model in 1987 [main pic, 003-007].

Anthony Fokker’s aircraft was equipped with a belt-fed 8mm Spandau machinegun, 500 rounds of ammunition, and most importantly, a genuinely effective synchronization mechanism allowing it to be fired safely through the propeller arc. In the hands of pilots such as Immelmann and Boelcke, aerial warfare escalated quickly. Alas however, even the dreaded Eindecker’s day was short-lived as more advanced types soon appeared at the Front.

My model is of course, peanut scale. I recall a day when it seemed so many modelers were constructing some degree of scale Eindecker, Bullet, Uglystik, even some very simple and sometimes large Taubes. This was as far as my own contribution to that trend went. The appeal for a build is that it is of such a simplistic design…except for that landing gear arrangement. Of course, that’s what draws a modeler in, isn’t it. Most modelers satisfy themselves with something less complicated. What would an Eindecker be without that contraption of a landing gear and all those bracing wires? It all makes for an interest subject...including the history...Immelmann turns and the Blue Max." 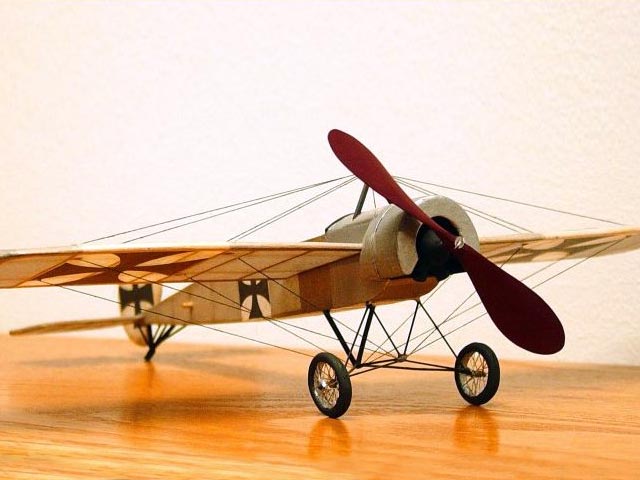 Oho, now this is a beauty! What is your other hobby, making artificial flies for fly fishing? :-)
It's all there, the airframe, the covering, the infinite wire bracing, wheel spokes, the only thing missing is the Spandau but this must be under maintenance at the armoury!
The plan itself has a couple of special effects, but I haven't seen the blueprint sheet. One of the themes of that fine book A Canticle For Leibowitz was the blueprint as a sacred object, a relic, showing it at the header then ommiting it is a disappointment for us gourmets of the plan per se.
Miguel - 16/04/2021
Ah, wait, that was me. Doh. Hang on... ok done. Have added the missing 2nd page to the planfile now, with the blueprint image.
SteveWMD - 16/04/2021
St. Leibowitz can rest in peace now.
Miguel - 16/04/2021
I believe you've found me out, Miguel...I rarely model guns. It's nothing deep and dark...maybe a mental block or a desire to move on to the next project. I served in the Air Force as well as the Army for many years...and war is not a tv program or an abstract concept. Still, I've grown beyond polishing my gladius and maintaining my pilum. That Spandau is there...you have to learn to see it. Thanks Miguel...you're a friend.
Neal - 17/04/2021
I had mentioned the thing in jest. That word is a popular misnomer for the 7.92mm lMG 08/15, I must have used it for the last time some 50 years ago. My more frequent acquaintances would smell a red herring if I were seen using it :-)
We air modellers or otherwise hobbyists may appreciate the sport for a number of reasons, but I never met any of that background who grew too fond of war, to paraphrase someone. My respect, Sir, to you and all those who saw the elephant.
http://wesclark.com/jw/elephant.jpg
Miguel - 17/04/2021
Yet another beautiful creation, Neal. I remember building a very similar Eindecker around 1967 or so. It turned out to be one of my best models and flew great, even ROG, despite the drag of the rigging. If you don't mind sharing your secrets, I'd be interested in knowing your technique for constructing "wire" wheels and what you use for rims and tires on such small models. Over the years, I've experimented with several methods, including the use of silk or cotton thread and monofilament line wrapped around a small, tubular hub and, on larger models, individual wire spokes with riveted ends through a drilled hub with tubular nipples at the rim (relatively heavy but quite realistic in appearance).
Jan Novick - 17/04/2021
Thanks, Jan. Wire wheels certainly can make a model into a piece de’ resistance. They can also be a source of ulta-frustration, and I would be remiss if I didn’t confess to having experienced the later. Honestly, I hardly feel qualified to be conducting a tutorial on the subject. Seems like every time I’ve chosen to construct them myself I’ve had to discover all over again the method that worked on the previous occasion! Basically, the wheel consists of three balsa rings with the outer two sanded to half-round cross-section. The inner ring should be of hard density…the outer two relatively soft. The hub is aluminum tubing cut to determine angle of spokes. The difficult step is now to create a cross-bracing with thread (beware the fuzz), the hub, and center balsa ring. This is not as easy as it sounds…too much tension and the center ring will distort. Using a length of axle wire through the hub…true the assembly…then fix with cyanoacrylate glue (be careful to not get it into the hub!). Now begin wrapping “spokes” onto the wheel. Let’s skip to adding the two outer tire rings…glue them onto each side simultaneously…sanded side out, of course…press firmly, enough for thread spoke to embed into the outer balsa rings. Sand any visible spoke material away from the center ring edge. Paint spokes and simulate rim. Paint wooden tire. That’s it…clear as mud. Of course, the heavier a model…the more stout the wheel must be, i.e., materials used…but this is what I’ve used for smaller rubber models. Fuzz on thread is a common issue…I’ve tried nylon thread…but I’m counting on the cotton absorbing the CA…a bit of give n’ take there. Wheels are built for the particular model…so I can’t say there’s a generic formula. Some of my crude wire wheel efforts can be seen here at Outerzone (thanks to Steve and Mary), De Havilland DH2 (oz12700), Demoiselle (oz2659), Halberstadt CL-III (oz12786), and Hawker Fury (oz7140). Best of luck…happy building.
Neal - 18/04/2021
Many thanks, Neal, I greatly appreciate the brief tutorial. Your results are truly astonishing. I may well attempt to employ your method the next time I'm masochistically inspired to create another pair of 'spoked' wheels.
Jan Novick - 18/04/2021
Add a comment