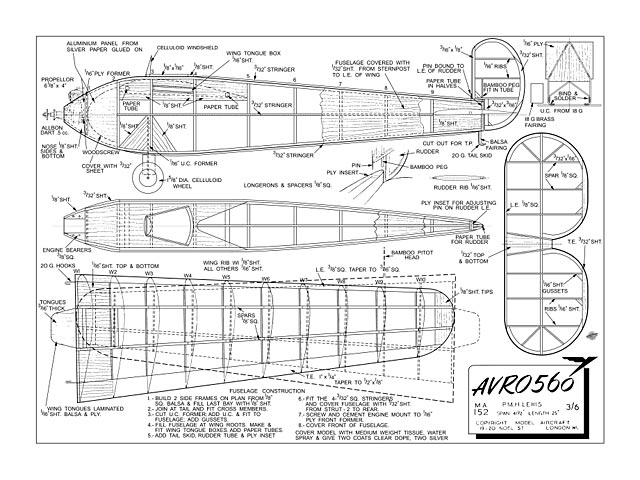 Quote: "THE Avro 560 was produced in the early 1920s to compete in the Lympne light aircraft trials and was flown by the late S/Ldr Bert Hinkler, who was one of the most prominent pilots of the time. The span of the machine was 36 ft and the engine fitted was the 698 cc Blackburn Vee-Twin.

The span of the model is 3 ft 6 in, and any of the .5 cc engines available may be fitted.

Fuselage: Select hard 1/8 sq balsa for the longerons and build two side frames on the plan in the usual way. Fill in the last bay at the tail with 1/8 sheet, at the same time cutting the opening for the tailplane. When dry, remove the side frames from the board, separate carefully and, after joining at the tail, cement in the cross pieces.

Cut the undercarriage former from 1/16 ply and sew and glue to it the 18 swg wire undercarriage frame. Fix the former in place in the fuselage and reinforce where shown with 1/8 sheet gussets. Fill in the fuselage at the wing root with 1/8 sheet and make and fit the box to take the wing fixing tongues. It is advisable to cover the wing box with silk doped on to add strength. The rolled paper tubes for the wing bands are also cemented in place. The tailskid is shaped and bound in position. The paper tube holding the rudder bamboo fitting is glued in two halves above and below the tailplane mount as shown on the plan.

Fit the four 3/32 sq stringers to the centre of the sides and the top and bottom of the fuselage and then cover the entire fuselage, from the leading edge of the wing to the sternpost, with 1/32 sheet to form an octagonal section. The cockpit edging is cemented to the top deck.

The hardwood engine bearers are screwed and glued to the * in. ply former to suit the .5 cc engine to be used. Solder the axle to the undercarriage together with the cross bracing wire and the metal sheet fairings.

Wing: The wing is made in two halves and secured with a tongue and box fitting. The leading and trailing edges are pinned down to the plan with the two 1/8 sq hard lower spars. Cut the ribs from 1/16 sheet and cement in place. When dry, add the upper spars and the 1/8 sheet wingtips. Insert the 1/16 ply wing tongues in the slots cut in ribs W1 and W2, sandwiched above and below with 1/16 sheet balsa for a tight fit in the fuselage box. Sew and cement the rubber retaining hooks of 20 swg wire to the leading and trailing edges and cover the top and bottom of the wing roots with soft 1/16 sheet.

Tail: Make the tailplane directly as shown on the plan. The 1/8 square leading edge is pinned down and the rest of the outline cut from 3/32 sheet with the grain running in the direction indcated. The 1/16 sheet ribs are added after fitting the 1/8 sq spar and the centre section of the tailplane is covered above and below with 1/32 sheet for strength. 3/32 x 1/16 corner braces and 1/16 sheet gussets complete the structure. The rudder is made in the same manner as the tailplane and is held in place by the bamboo peg fitting into the paper tube at the rear of the fuselage. The rudder is adjusted by selecting the position required in the ply insert on the top of the fuselage. A pin bound and glued to the leading edge of the rudder engages in the holes in the ply insert.

Covering: The fuselage and flying surfaces are covered with medium weight tissue, water sprayed and given two coats of clear dope and two of silver dope. The celluloid wheels are fitted to the axle and retained by two soldered washers. The semi-circular metal nose panels and the cowling panels in front of them are cut from silver foil and glued in place as shown on the plan. The top decking of the fuselage to the trailing edge of the wing and the underneath of the fuselage to the undercarriage are painted black as are the sides of the bay above and below the above-mentioned semi-circular nose panels. The windshield is cut from celluloid and cemented in its slot in front of the cockpit. Aileron and elevator hinge lines are drawn in with Indian ink. The name 'AVRO' on the fuselage sides and the numeral 6 on each side of the rudder and above and below each wing tip are painted on in black.

Flying: Test glide over long grass and adjust by altering the tailplane incidence and by adding weight to the nose until a satisfactory glide is obtained. Power flights may now be made with the normal adjustments to sidethrust and the rudder until the desired flight pattern is reached."

Update 31/10/2021: Replaced this plan with a clearer copy, essentially redrawn from scratch, thanks to TonyP. 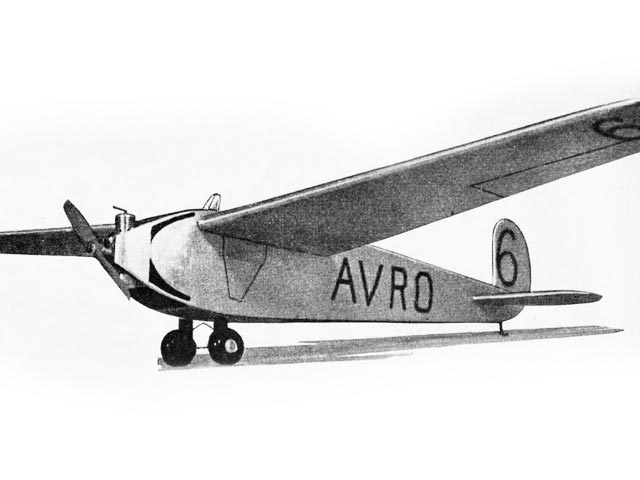