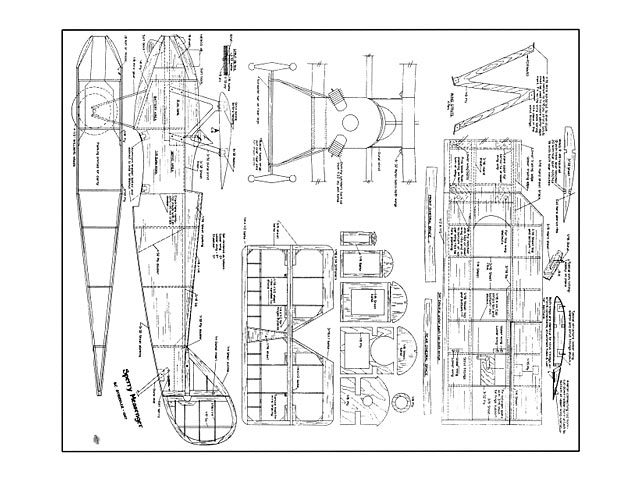 Quote: "Did you say I'll build a scale biplane if I can find one that will fly? We're calling your bluff. Here's a compact little bundle that flies like a pattern ship, looks great, and builds fast. Go ahead, try to resist it!

The 1920 Sperry Messenger has often been referred to as the 'cutest little airplane in the Army'. Designed by Lawrence Sperry, it remains the smallest airplane ever used by the Amer-ican military, with a wingspan of only 20 feet.

The original Messenger was intended to serve as a scout that could take off or land from unprepared country roads while delivering messages to and from the front lines. Like most aircraft of this period, it was in fact used for nearly every purpose except that for which it was designed. The little Messengers were used to pioneer techniques for hooking up to airships during the period when dirigibles were envisioned as aerial hangars for small fighter aircraft.

Three of the first five Messengers were converted to aerial torpedoes guided by radio control, so if you do not feel like adding a pilot's head to your model, you can still call it scale! If you are interested in the history of this di-munitive biplane, there were two ex-cellent articles in American Modeler in May and June, 1962, complete with detailed drawings.

The first time I saw the three-views of the Sperry, I realized it would make an ideal flying scale model. I used the term 'flying' scale model because there was no attempt to make this ship a super-scale contest ship. All outlines and control surfaces are scale. Sheet balsa is used where the original was plywood covered, and silk is used where the original was cloth covered. The wing structure, however, uses conventional D-tube construction with planked leading and trailing edges. Also, the flying struts were omitted since I felt they could possibly cause a lot of damage in hard landings.

The two outstanding features of this model are its flying ability and its simple construction. Jack Blything did the test flying in Albuquerque and promptly stated that it was as easy to handle as anything he had ever flown. So far, at least 10 different guys have flown it and all have been en-thusiastic about its gentle characteristics. It is only my third multi, but I have been flying it for over a year and it still has the same wooden 12 x 5 prop that it used on its first test flight. In the hands of a good RC pilot, this scale job will come very close to true contest performance. If you think symmetrical airfoils are necessary for inverted flight, you may be in for a shock when you fly your Messenger!

Every effort was made to keep the structure as simple as possible, and this has resulted in a very light but very strong airplane. The original weighs 5-3/4 lb complete with a Merco 61 and a Micro-Avionics radio! Even though the model is small, it is able to handle the Merco-61 very well. I am sure a .49 would fly it just as well, and I'm not too sure that a good .35 wouldn't fly it in a very scale-like manner. It will fly just about any manuever on 1/2 throttle with the Merco 61.

If this has been sufficient to whet your appetite, why not break out the trusty tools? I always build the fuselage first, simply because I hate to build wings and tails. Begin by cutting out two identical fuselage sides from 1/8 x 6 x 36 balsa. No splices are required since the fuselage is so short. Add the 1/32 ply doublers as indicated on the plans. Be sure you do not omit the small doublers under the stabilizer. I always use contact cement on doublers to prevent warping the sides. Add the 1/8 ply doublers as shown for the cabane strut mounts, being very careful to see that they are added on exactly the same place on both sides to insure alignment of the fuselage when it is assembled later.

Prepare all formers as shown on the plans. Be absolutely certain that the formers are exactly square. Cut the motor bearers from ash or maple to the outline shown on the top view. Note that 2° right thrust is built into these mounts. If these parts are made accurately, proper alignment is assured when the fuselgae is assembled.

Notice that the fuselage sides are cracked just behind the cockpit area. To do this, use a straight-edge and cut through the balsa until you reach the 1/32 ply doubler. Be careful that you do not cut the doubler. Now, gently crack the sides by positioning the crack line over the edge of your bench with the ply doubler down and press down on the part of the side that overhangs your bench. Mark the former positions and the motor mount positions on the in-side of both sides with a soft pencil. Glue on the motor mounts using either white glue or Franklin's Tite-Bond..." 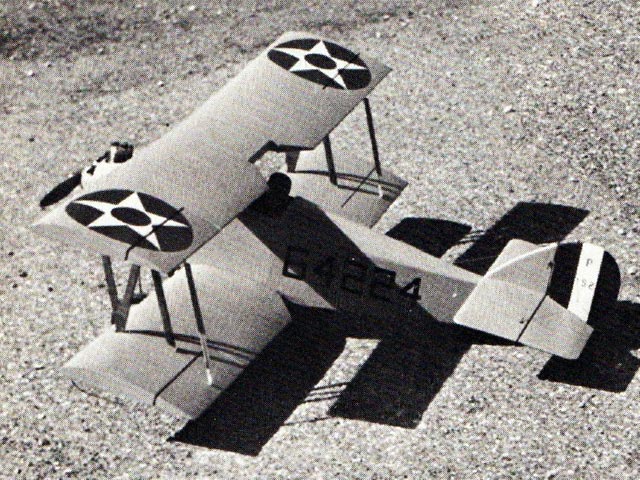