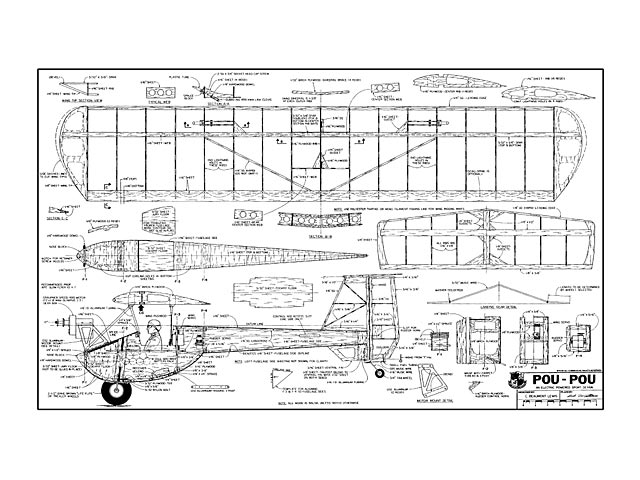 Quote: "This is a model of somewhat unorthodox design, and it also uses a few unusual building techniques. Although it has a T-tail and a 'stabilizer,' it is the wing that does the 'all-moving,' not the horizontal tail.

This confers some advantages, such as the saving in weight and complication that results from not having the servo, pushrod, and bellcrank that are usually required to operate the horizontal tail or elevators, and this weight saving Is where it usually matters most - at the tail. But I have to confess that my main reason for building it was to find out whether or not it would fly; it does! It is a one-piece model that fits easily into the back of my diminutive hatchback and can be in the air a few minutes after arriving at the field.

The T-tail configuration was chosen to keep the horizontal tail as far as possible out of the downwash of the wing. since the downwash moves up and down as the wing incidence changes relative to the fuselage and I wanted to avoid constant trim changes.

The structural design of the tilt wing led me to adopt a parasol design with external bracing, and this allows a very light wing to be designed.

Some inspiration came from Henri Mignet's 'Pou du Ciel' (Flying Flea) tandem wing home-built of the 1930's, and the name 'Pou-Pou' is in tribute to this. As the design proceeded, it began to look more and more like an 'ultra-light' and what could be more fitting for a small electric powered model?

The front fuselage is made deep (A) to keep the landing gear as short as possible, since one cubic inch of steel weighs about sixty times as much as one cubic inch of balsa, and (B) to house a variety of different power packs that I wanted to try out.

I worried some about the small wing servo I intended to use (25 oz-in of torque at 4.8 volts) until I calculated the pitching moment of the wing and the leverage of the pushrod about the pivot point and concluded that it would be good for at least 4g. This one is not intended for fancy aerobatics.

Not wanting to risk big bucks on this rather novel design, it is designed around the popular little Speed 400 motor (geared) and eight small cells. Its structural design is more sophisticated than it looks (I try to make as many parts as possible do more than one job), and its construction is not for the raw beginner.

Having said that, let's see what is entailed. Please read through the following carefully before starling to build: there are places where the correct sequence is important, and you can be in trouble if you don't follow it.

Construction: Cut all parts as accurately as possible. This will save you a lot of trouble when you come to assemble them, and all will then go together like Laurel and Hardy. All wood is balsa unless noted otherwise on the plans..." 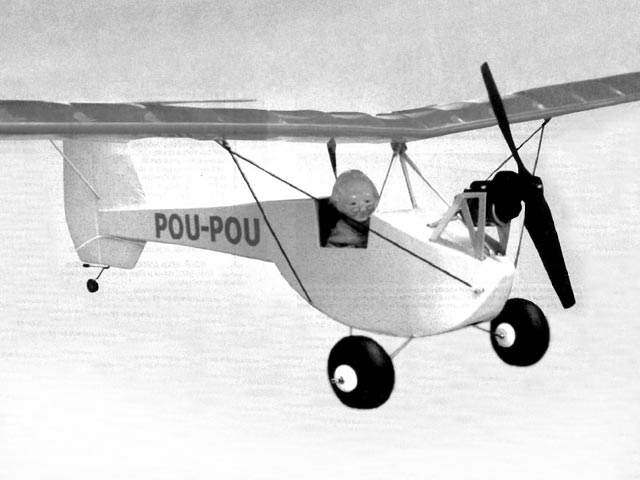 Moving wings for control was never a success story as even the original Pou du Ciel demonstrated by nailing them rigid, but this design is so high in the cuteness parameter that the common sense rules can be safely ignored. May the grass under you always be soft!
Miguel - 11/04/2021
For those interested in learning more about the Mignet formula, and the hundreds of successful full scale, models, and derivatives that fly today, check out pouguide.org The site is in French. Open it in Google Chrome and it should automatically translate for you. Exhaustive collection of facts, figures, stories, build logs, etc. Plenty of videos of full scale Flying Fleas. After the initial problems with the layout were sorted in 1936, Fleas have acquired one of the best safety records of any homebuilt design.
Mark Young - 12/07/2021
Add a comment