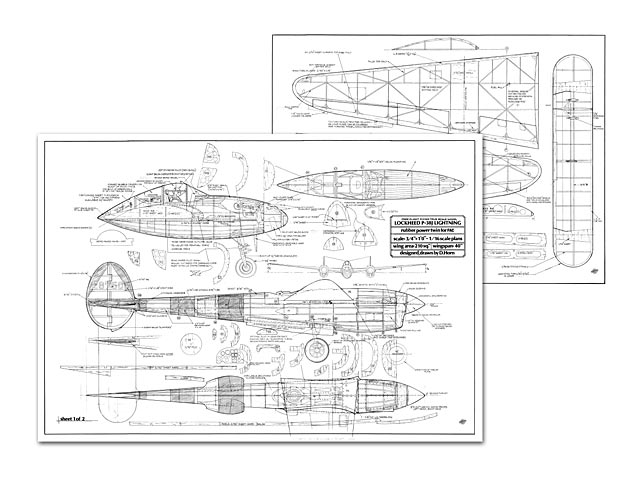 Quote: "Duke Horn requested I submit his 40" span rubber-powered free flight P-38 plan. Plan files attached (sheets 1 and 2 of 2), along with photos of Duke's model. Quite a beauty, and an impressive flier. Video of Duke flying the model at the 2018 Texas Scale Champs is available at: https://www.youtube.com/watch?v=vhOQInvC1Gs.
Duke also provided the attached writeup to go with his P-38 plan.
Thanks again for all you do to keep these plans available!"

In the spring of 2010, I decided I wanted to build the iconic P-38 Lightning, after inheriting a Guillows kit of that model. Being an FACer for many years, I knew the Guillows build would be unacceptable for a rubber model because of its weight. So, I decided to start from scratch with my plans, yet wanted to use the decals and kit plastic to make molds. So, mine is the same 40 inch span as the Guillows, for that reason. I did use the canopy and turbo-superchargers.

My plan was to make as light and strong a structure as possible, yet robust enough to take several seasons of punishment, since I didn’t want to have to build another one.

I have not found a photo of it flying back in active war service, so consequently, no one seems to know with empirical evidence what would distinguish between the conflicting invasion striping I’ve seen on plastic models, etc, on the booms. That being said then, mine is correct for Lefty Gardner’s ship, California Cutie.

Fortunately, now, Callie Graphics has a complete graphics kit for her, except the invasion stripes. My ship is still way too heavy for any flights over a minute as has been done in the past. AUW: 308grams, because I wasn’t able to find anyone locally who could pull .007 Styrene from the molds and had to use .015 ABS plastic instead.

Presently, Bernard Guest of Hummingbird Models, Alberta, Canada, has the rights to kit it, pending production time in the near future [see site at https://hummingbirdmodelproducts.com/]. Using laminated balsa methodology, which Bernard has kitting experience for, the plane from his kit should be built for around 200 grams.

This ship with counter-rotating Volare (Superior) 3-bladed props, flies like it’s on RAILS! Good Luck. Show us your finished product! 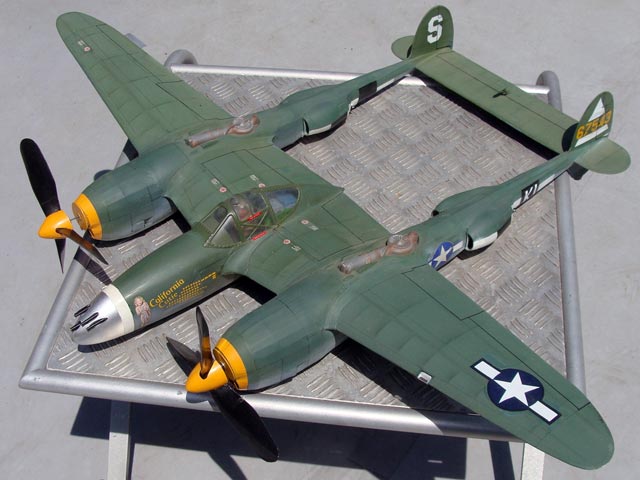 P-38J/N4145X was owned at one time by Lefty Gardner; he sold it (derelict airframe) to British collector Stephen Grey who had it restored to flying condition painted as 'California Cutie.' The plane was in Grey's Fighter Collection when it crashed at Duxford in an airshow display. It was totally destroyed in that crash. The famous Lightning that Lefty Gardner flew in his well known displays is P-38L/N25Y and was known as White Lightnin'. It suffered damage in a forced landing, and was later bought/restored by the Red Bull company, and continues to fly in airshows.
Dave D - 10/04/2021
Magnificent! From the cockpit canopy detail to the distressed colouration of the superchargers to the overall finish; one might even mistake it for a plastic kit. A superlative job throughout.
Jan Novick - 10/04/2021
Hello, i am mistaken or i see 3 blade plastic propellors? Where can i get such? Many thanks, Eduard.
Rautchi Eduard - 22/06/2021
As on the instruction notes he used Superior Props.
link for prop shop: https://volareproducts.com/blog/?post_type=product
pit - 22/06/2021
Eduard. The plan does specify carved wood props so I think they are probably not plastic.
Peter Rea - 24/06/2021
Add a comment