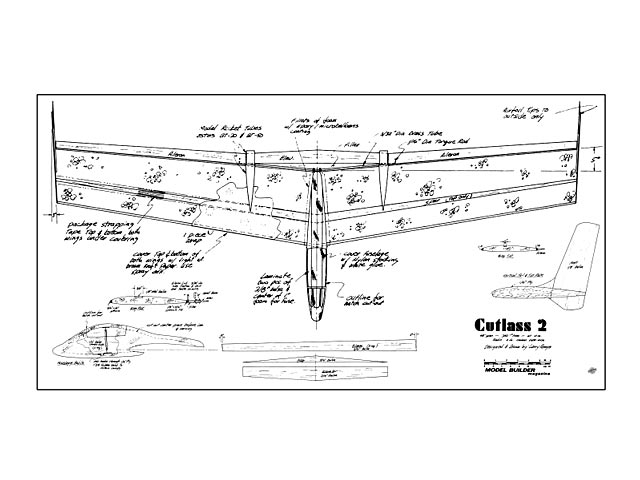 One of the most visually interesting of the early jet fighters was the Chance Vaught Cutlass. This carrier-based Navy fighter had an impressive list of firsts to its credit. It was the first US jet fighter designed from the outset to use after-burner, the first swept wing jet aircraft in the Navy, and first such to fly from a carrier. It was the fastest Navy aircraft of its time, and the first tailless airplane to go into production for U.S. service use.

I have always loved the look of the Cutlass, and flying wings in general. The Cutlass II is an attempt to capture the style of the original Cutlass without sacrificing the performance I want in a slope soaring glider. The Cutlass II has a comparatively high aspect ratio wing with a very modest sweep angle. The tip-mounted, toed-in vertical tails are more effective than the mid-wing verticals would have been. Control is by separate elevator and aileron rather than mixed elevons to avoid the problems of separating control sensitivities and neutral.

The engine configuration of the original Cutlass makes good sense for a full scale aircraft, but would produce high drag in a glider. As a result, I simulated wing-buried engines on the 'II' to hint at jet power. The exhausts pivot up and down with the elevator, by the way. Consider what that would do for low speed control on a real aircraft! Lots of little touches such as fillets between fuselage and wing, and the paint scheme add to the air of authenticity. I have even had a few people think it was a true scale model of a full-scale aircraft. (If Grumman wants to use the design, I would be happy to settle for only a small royalty.)

One thing that flying wings won't do is compete directly in performance with conventional aircraft. The drag caused by use of an airfoil with inherent aerodynamic stability, or the short coupled stabilizing tips of the swept wing models causes a significant reduction in performance compared to a standard aircraft of the same wing area (total including stabilizer, to be fair). However! A flying wing, and especially this jazzy, military flying wing, will get you center stage attention at any flying site where you take it. In addition, Cutlass II is smooth, fast, and maneuverable.

The model presented here has some interesting construction features which resulted in a completed flying weight of 10 ounces. Despite this light weight, the aircraft has excellent penetration, and flies smoothly and stably when balanced and trimmed carefully. As with all flying wings, correct CG location falls in a very narrow range. Balance points outside that region result in either a 'Flying pig' or an unstable terror. More on trim technique later!

The keys to Cutlass II's light weight are foam wing cores covered with light-weight brown wrapping paper, a foam fuselage skinned with ladies' nylon stocking material, white glue, and, of course, a Cannon Super-Micro two-channel airborne radio system. The brown wrapping paper covering sounds strange, but was the ultimate selection after extensive search and weighing of potential wing skin materials. It proved to be half the weight per square inch of the next best material, 1/32 balsa! Wing rigidity is excellent, and the paper took very little filling to give a good finish.

Wing: Construction starts with your foam wing cores. You can either cut them or buy them. I cut mine..." 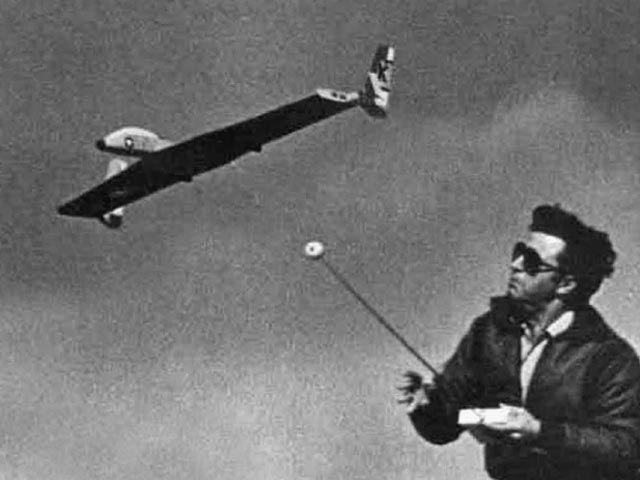