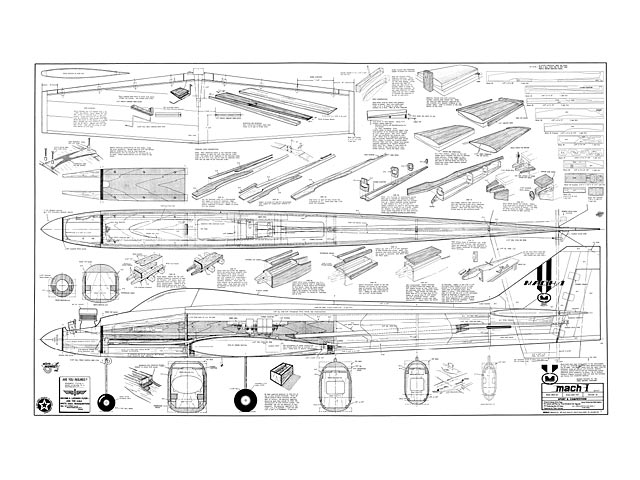 Hottest Pattern plane of the year in the most awaited kit, here with a different slant for project evaluation - an evaluation of design as well as the kit by a well-known designer and competitor. Both criteria receive a top report after a most critical and exhaustive analysis.

Clearly, the successes achieved in Pattern competition by Norm Page with the Mach 1 are impressive. It is recognized that success in competitive flying is not easily achieved and is the overall result of a great deal of effort in several disciplines. Since the total system for competition flying includes aircraft, guidance system, engine, proficient pilot-loop-closure and an element of luck, it is of interest to examine one part of the total package for its contribution to this winning record, namely the aircraft. The approach, therefore, in this Field and Bench article, consists of an evaluation directed to the following topics: aircraft design characteristics, kit construction and evaluation, field evaluation.

AIRCRAFT DESIGN CHARACTERISTICS: Overall, the aircraft is large by current Pattern trends and displays extremely graceful aerodynamic lines, wheels up or extended. A closer look reveals many distinctive features which will be discussed in greater depth.

Wing: A relatively large area and root chord are immediately apparent. Planform area is 725 sq in, span 62 in resulting in an aspect ratio of 5:4.

At a flying weight of 7.5 lbs, the corresponding wing loading is 24 oz/sq ft. This wing loading should enable a low approach speed and gentle touch-down. It would appear that at the 7.5 gross weight, turbulent flight conditions could pose a problem - but read on!

The airfoil is symmetrical, root and tip, with the maximum thickness/chord ratio of 14%. Thickness of 1 in. at the tip and chord of 8.5 in, yields a thickness/chord ratio of 12%. Here, then, are details of significance. The wing is thin and decreases in thickness ratio outboard. Many R/C Pattern aircraft feature wings with increasing thickness ratio toward the top or apply progressive airfoil development to achieve a non-symmetrical section at the tip. Profile drag, then, for the Mach 1 wing, can be expected to be minimal.

The taper in planform results in a planform taper ratio of 56%, which combined with the large area, is a good approach to minimizing the wing induced drag. From a performance viewpoint, aerodynamic design of the Mach 1 will require less power for a given forward speed, or, based on current 60's at a bit over one horsepower, the forward speed can be expected to be improved.

Considering the roll maneuvering capability, the tapered planform is also an excellent approach toward reducing the aerodynamic damping with a roll velocity. The more than adequate area should result in a plentiful margin from stall for even the most extreme maneuvers.

CG Position: This parameter is also of particular interest. The position shown, 31/2 in (23%) from the root chord leading edge, is quite forward by current practice. Technically, positioning the CG forward results in a more negative static pitching moment slope and decreased elevator control sensitivity - the elevator control stick needs to be displaced more to effect an aircraft attitude change. Some R/C flyers will refer to this characteristic as sluggishness. But, this forward CG arrangement is a very effective method of achieving a smooth flight profile.

Generally, the necessity to move the CG aft stems from the spin maneuver and to minimize the amount of forward stick needed for inverted elements of a maneuver or for inverted flight.

Thus, if the spin maneuver can be realized with the CG in the forward position, aircraft static stability is improved, control sensitivity is reduced and smooth flight characteristics achieved.

Thrust Line/Chordline: The dimension 0.6 in approaches the force set up which is ideal for the execution of truly axial rolls. Art Schroeder recognized this arrangement and used it effectively with the Eyeball design. Norm Page has achieved the same line up, but with the low wing configuration. Positioning the chord line as nearly as possible in line with the thrust line, when combined with the proper amount of dihedral angle, is an important design parameter for the axial roll requirement.

Strip Ailerons: The strip ailerons taper in planform and thickness consistent with the wing planform and thickness changes. Of significance, the strip ailerons are not carried out to the wing tip, which is good aerodynamic practice. During aerobatic maneuvers, the wing is at a higher angle of attack compared with trimmed level flight due to the required elevator deflection or required aileron deflecting. The wing tip section is closer to stall, especially with the symmetrical section of reduced chord. The additional drag associated with the deflected aileron is purposely kept removed from the tip, precluding excessive drag build-up and an associated speed decrease during the maneuver. 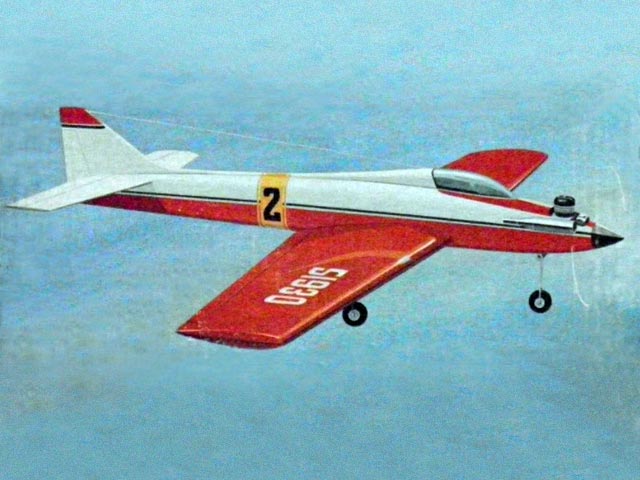