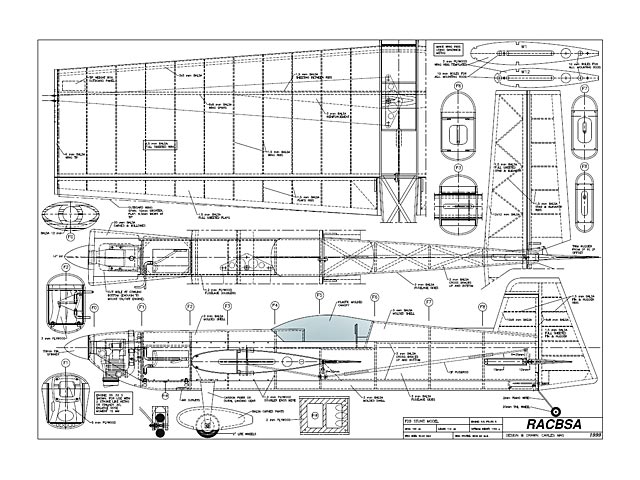 Quote: "Dear friends, Racbsa was designed and built in 1999 and its birth had a particular story.

My first attendance at a continental event was in 1998 at the World Championships in Kiev. I learned a lot there and I was specially impressed by the flight appearence of chinese Hong Wei model. It was powered by a 4 stroke OS engine and performed a very smooth and precise pattern.

After the event, the chinese team visited France to attend a World Cup contest in Rouillé. Once there my friend Francisco Vergara who was then living in France took all necessary measures and templates to draw a plan of Wei model, a copy of which was given to me.

It was then when I started to think about desinging a new stunter on this numbers powered by an OS 52 4 strokes. From the point of view of formal design the intention was to create a model with the appearance of a real aerobatic aircraft.

When it was time to give the new plane a name, I realized real aerobatic aircraft has well visible words written on the wings, usually sponsor's brands. Like all of us, being short of sponsors at that time, I decided to use the available space on the wings and fuselage by typing the name of my club (Real Aero Club Barcelona Sabadell Aeromodelismo), which happened to be the name by which the model is known.

Final weight was 1900 grams. It was more than desired but although that the model always had very good handling, flying nice smooth corners and tracking well in all conditions.

In 2001, Racbsa was re-powered with a Retro Discovery 60 engine. The lighter engine, coupled with the job of removing as much weight from the tail as possible, resulted in a final weight of 1835 grams, what repercuted noticeably improving the flight qualities of the model.

Racbsa was retired from competition in 2004 after a succesfull compaign in which I could consistently improve my flight quality. Lately Racbsa has been used as an electric powered test airplane."

I have many other designs built, but unfortunately the CAD plans are only for building purpose and not well finished for being published. May be in the future I will do it.

I hope you like and greetings from Barcelona. Carles Mas" 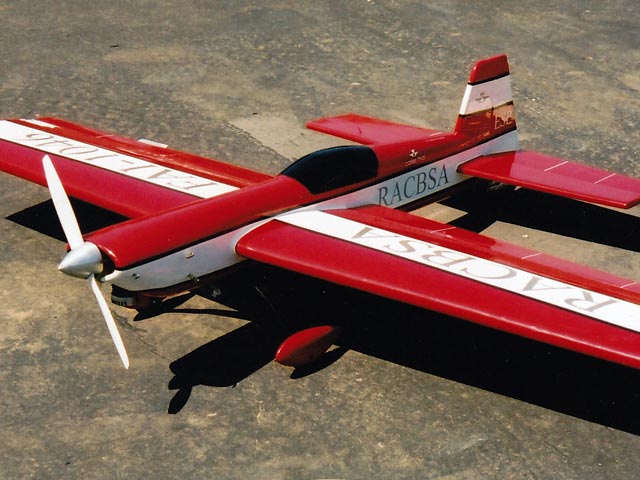