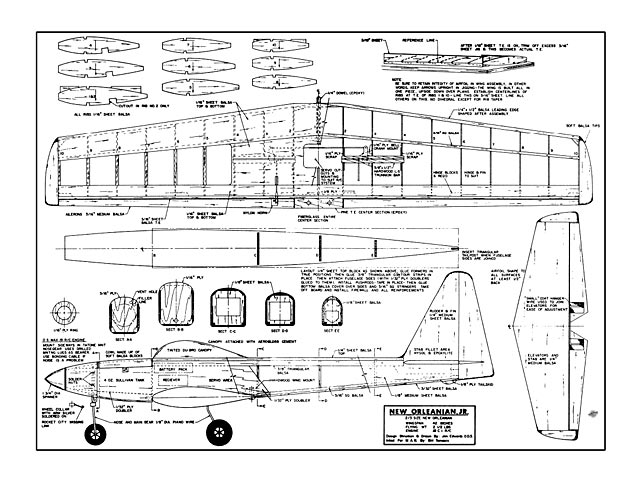 Quote: "Big brother, little brother today you take your choice. Miniaturization has brought the smaller multi jobs to the fore, and what better way to achieve instant success than to take the established successes and duplicate them in miniature.

With the advent of the mini radio systems and their reliability, small airplanes are becoming more and more popular. After seeing Phil Kraft's Flea Fli (oz7210) in Pensacola last year, and recognizing the popularity of the full size New Orleanian, I decided to try shrinking one. Now along with the Flea-Fli, comes another - would you believe it - model of a model.

I have doubts about these becoming popular with the serious contest flyer, because they are a little harder to see and if the judge can't see them then they aren't going to like judging them. As a pilot who enjoys and participates in full scale aerobatics, I can tell you that it is similar to the situation that the Pitts special finds itself in. It would be hard to find an airplane better equipped to do all the maneuvers, or more pleasant to fly, but sometimes the judges are just prejudiced because of its size. This is especially true in world competition. But here it's fun and a pleasurable pass time with which we are concerned, so let's get at it.

The prototype flies very well indeed: Performance with the O.S. max 19 R/C engine is remarkable. With my Kraft mini system, using the 250 Ma pack, the all up weight is only two and one half pounds. All the maneuvers of both the AMA and FAI patterns can be flown with ease, and about any size desired.

In the construction of the ship, always keep in mind that the weight should be kept to the absolute minumum..it is amazing how these little ships change their natures when they become heavyweights. Four ounces becomes equivalent to a couple of pounds in the big brothers. Remember my reputation is riding on your building a good light airplane!

I like to begin an airplane with the wing. Other operations can be sandwiched in as the 'adhesive' drys or cures, (or what ever you use does). That's just a big word I had to use, since I learned it at Toledo. Now back to work. The wing is conventional in structure, and is built upside down on the plans. This way every thing but the top sheeting can be complete while the wing is still pinned down. Of course the tips are added later. I always add ailerons, rudder and elevators after priming, and just before the final color is sprayed. Use contest grade balsa throughout the entire ship unless otherwise noted.

After the work on the bottom half of the wing is complete, carefully remove it from the building board and attach the top leading edge cover along with the capstrips and center section covering. Don't forget to reinforce the landing gear trunion bars with plywood against the ribs: Also the vertical piece of hardwood which serves as a torsion bar. As stated on the plans the first ship had the servo standing in the wing cutout. This situation made for a very crowded fuselage and put the aileron push rods very close to the other servos, even with a P-51 type bulge under the wing to house it. I feel that the work involved in placing bell cranks and spanwise pushrods will be worth it in your ease of final assembly. There also will be no need for the oil radiator under the belly. At this point provision must be made for holding the wing to the fuselage.

Obtain a pine block the size of the rear center section of the wing. Carve it to match the trailing edge and epoxy this in position. When the epoxy cures then fiberglass the entire center section. After this cures get out your Enders blade and scrape to perfection. Cover the wing with your favorite material. If silked, then it had better be lightweight and not much dope. Mine have all been silk and dope. In the old fashioned way, followed by plasicized acrylic lacquer color.

At this time the fuselage is attacked. Cut the sides from soft balsa and add the 1 /32 plywood doublers. While these are curing cut the fin, rudder, elevators, stabilizer and ailerons from their appropriate sized wood. Carve and sand to their true shapes, apply a couple of coats of clear dope on and cover with jap tissue. The fuselage is very original as you can see..." 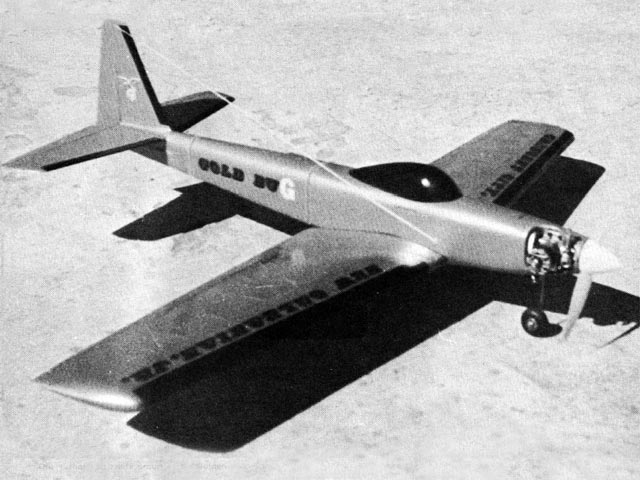 Any one know where the CG is on this one? Cant see it on plan, or in description, would usually guess 1/3 back from LE.
Dave Gee - 08/04/2021
The [larger] New Orleanian was published in the March 69 MAN, the article contained wing and stab templates and a simplified small plan. You got the glassfibre fuselage from Hartman for $22 at the time. In May 69 MAN published corrected templates. In Sept 69 was published New Orleanian Jr. Possibly CG indication on March 69 article.
Pit - 09/04/2021
Add a comment