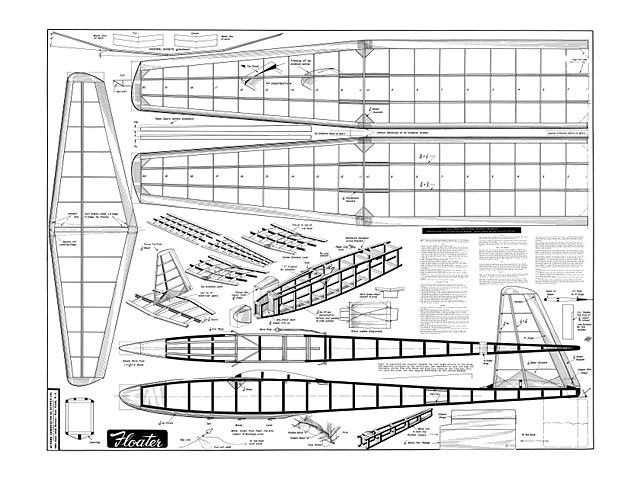 The Jasco Floater appeared in at least two versions. For the original 1946 plan see Jasco Floater (oz2010). This here is a later version from the 1950s, with simplified wing and a slimmed-down fuselage (maybe a redesign by Frank Ehling?).

Quote: "I find myself looking thru old models, just to then search Outerzone.. to see if it's one you don't have posted!! These plans, and the people who designed them, and all of us who enjoyed building them?? Well, to me, it keeps alive a much simpler time. Certainly glad to have been one of the boomers, while models were still being built, or should I say crafted?
This is a different print of the Jasco Floater. While it is 72" WS, it
doesn't show the drafting skills and details of Frank Zaic. I can't find a date on it, but there is a type written note between the fuse side and top view. It's clearly been added after the plans were drafted, with a reference to the 'original' Floater, which had false ribs. That could mean a lot of balsa dust, but I found a beautiful laser cut set from Bob Holman Plans. So I'll be building the original wing.. to put on this fuse and tail. I'll try to get you some photos later. The plan is fairly clean, but could use some touch-up. Keep up the great work!! JWR"