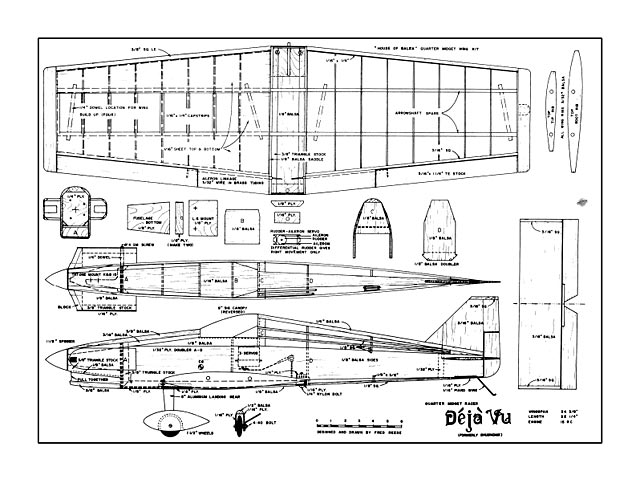 Quote: "Deja Vu, by Fred Reese. Quarter Midget racer with style and class. At first race entered, it won the 'outstanding aircraft' award - and it hadn't even raced yet! Designed to win, its good looks make it even more desirable.

The full scale Deja Vu was built in 1966 by Howard Terrill and named Shushonick. Howard raced Shushonick until 1969 when it was purchased by Sal Lanese and renamed Deja Vu. (Deja vu is French for the illusion of having seen something before.) Sal Lanese modified Deja Vu by installing a re-shaped canopy and in 1970 he added all new tail surfaces.

When I decided to build the Deja Vu I was looking for an airplane that would be suitable for the new rear exhaust Supertigre X-15 when it became available. The Deja Vu's cheek cowls are perfect and the wing platform is correct for the House of Balsa Quarter Midget wing kit. I also wanted a lighter airplane and made every attempt to reduce weight. The construction was de-signed for MonoKote covering which saves weight and also provides the smoothest finish. I used coupled ailerons and rudder which eliminated the weight of one servo. The rudder movement is differential giving almost no left movement but enough right throw for take-off. During a race the Deja Vu handles normally without any rudder interaction. The weight saving techniques were successful as the finished dry weight was exactly two and one-half pounds with a K&B 15 engine.

The Deja Vu's first race was the 1973 Quarter Midget Nationals held at Falls of the Rough State Park, Kentucky, where it was awarded the prize for outstanding aircraft. (The prize was a new S/T 15 FI R/C donated by World Engines for this event.) Its performance at this race was poor although the airplane was competitive when the engine ran. Apparently I clogged the carburetor by using unfiltered fuel on a practice flight the evening before the race.

CONSTRUCTION: Build the wing from the House of Balsa Quarter Midget wing kit which is available through your hobby shop or directly from House of Balsa, 2814 East 56th Way, Long Beach, Ca 90805. The wing can be scratch built by cutting root and tip templates and stack carving. the ribs. Drill the 1/4 in holes in the rib blanks prior to carving and hold the stack together with 1/4 bolts. The fiberglass arrowshaft spars can be purchased from your hobby shop or sporting goods store. If you can't buy shafts long enough splice a short segment onto each, shaft with a piece of dowel. Mark the rib locations on the shafts and slide the ribs on. The ribs are glued to the shafts with Titebond or slow curing epoxy. While the glue is still wet, lay the wing down over the plan with the jig dowels in place and wiggle the wing until the structure will lie flat with the shafts resting on the dowels without pressure. Allow to dry thoroughly. Add the 1/16 x 1/4 LE and 3/16 sq TE.

With the wing flat on the dowels again, add the top sheeting and the capstrips and allow to dry before moving. When dry, remove the wing from the board and add the bottom sheeting and capstrips. The 3/8 sq LE, aileron torque rods, 1-1/4 x 5/16 TE and ailerons can be added and shaped, followed by the wing tips. The wing center section need not be sheeted as the arrowshafts provide more than enough strength, The center section structure is added later when the wing is fitted to the fuselage.

Cut the fuselage sides from medium 1/8 balsa. Save the wing cutouts for the wine center section saddle. Epoxy the 1/32 plywood doublers to the sides. Cut out the bulkheads, firewall and 1/8 plywood fuselage bottom. Bolt the eneine mount to the firewall. Epoxy the 1/8 plywood bottom piece to the firewall and then epoxy this structure between the fuselage sides. When set, glue bulkhead B between the sides and pull the tail together and glue. Add the remainder of the bulkheads and the top portion of the fuselage sides under the canopy. Glue on the top of the turtledeck and the top front.

Sand the top front and fuselage sides with a large sanding until the 3/16 sections an be added tocomplete the top front. Some additional scrap will have to be added inside the fuselage front to fair in the spinner. Glue in the 1/8 balsa engine compartment floor and the triangle stock. The boat prow lower front is made by slicing through the fuselage sides, under the eneine compartment floor, back to the firewall. Moisten the sides that will be bent and pull together at the front and glue. Add the 3/8 sheet bottom and recess in a piece of 1/4 dowel for the fake air scoop and to act as a skid in case of a noseover..." 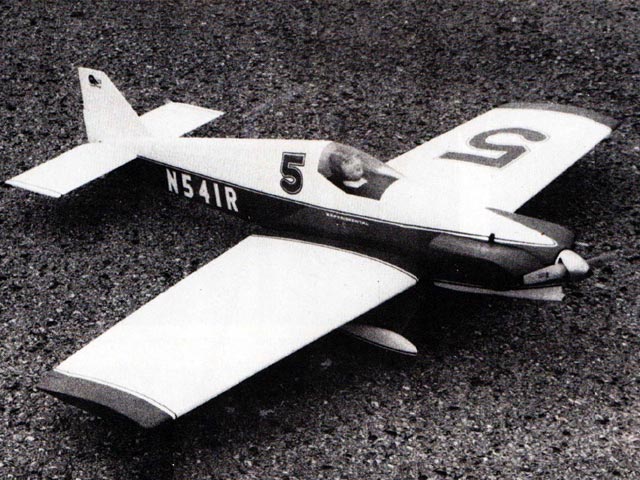