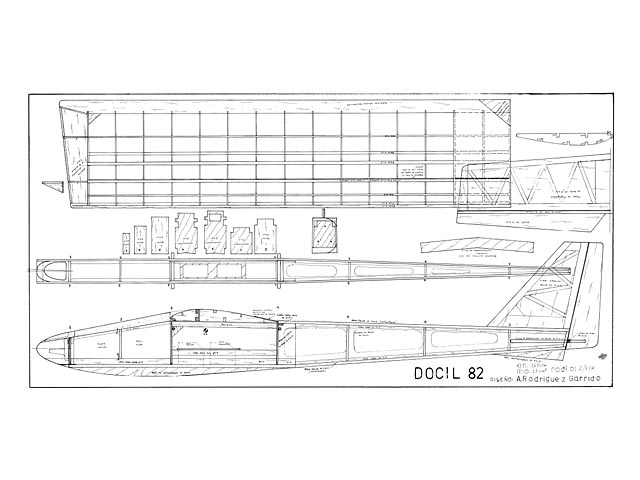 Quote: "Hola Mary y Steve; I have not sent you any plans or photos for a long time. Today I send you the plan and photos of my DOCIL II design. I designed this model in 1982 after having built and flown a Das Box Fly 10 (oz6206). I wanted a model capable of flying at thermal after running out of fuel and I made this model that allowed me to fly many hours at thermal, after exhausting the small tank (10 cm3) that fed a Tee Dee 010 and later an OS 10 FP.

With the enlarged wingspan and the narrower, more aerodynamic fuselage and enlarged both the HTP and VTP the model provided me with training for pure gliders.

During Christmas 2020, I began the construction of two fuselages, one for an electric motor and the other for a small OS LA 10 and a single wing for both.

Modified the construction of both the sides of the fuselage and the empennages, the sides changed to lightweight 1.2mm poplar plywood with 3x3 basswood reinforcement slats instead 3mm balsa sides and reinforced empennages instead of balsa sheet. Today I have done the complete flight tests for the electric version and the glide tests for the glow version.

I have obtained a simple model to pilot, and very agile in thermal, it only remains to test the glow when the weather improves. I have placed the center of gravity in both versions a centimeter behind the main spars, and by means of heat I have given the wing a negative incidence of 15mm at the trailing edge at the height of the marginal edge (wash out).

The stability and the closed turn in thermal allows to climb very pleasantly without strange movements in any axis. I think I will spend a good spring in the company of eagles, storks and vultures." 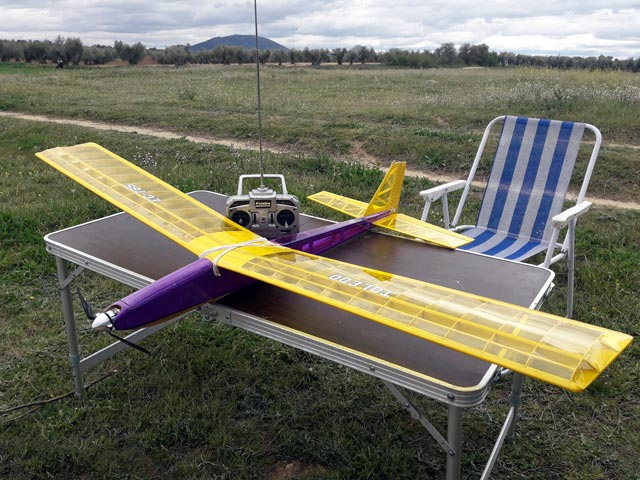 Good morning friends; I have found more photos of the Docile (OZ 12920) [pics 011-014] these correspond to a good friend Javier Alonso de Pablos who has already disappeared and who made the model at the end of the "eighties" and has the interest of the newly designed model, I hope you like them, greetings,
AntonioRG - 14/04/2021
Add a comment