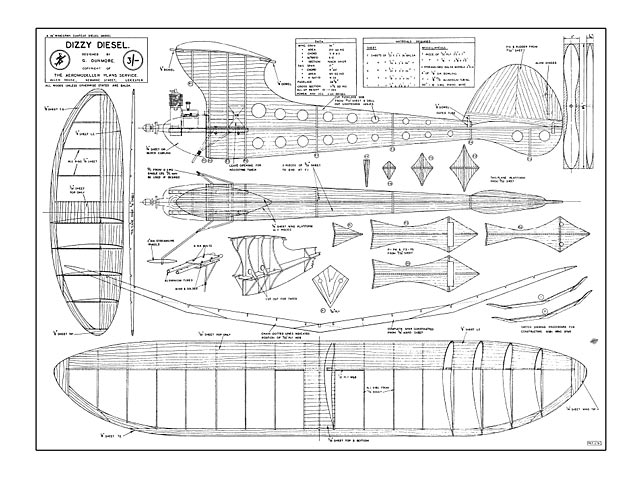 Quote: "THIS model was designed around the popular 1.3 cc Mills Diesel Engine. On commencing the design I decided upon a wing area of 210 square inches with an aspect ratio of approximately six-to-one, and due to its success in America, the wing section selected was NACA 6409. The fuselage I decided should be approximately 50 percent of the wing span. I also endeavoured to group the main forces, ie thrust, lift, drag and weight, as closely as possible. This, the American magazines told me, would help to prevent the model going over onto its back during the climb. With all this borne in mind, and a drawing board in front of me, the result was the Dizzy Diesel. The engine has not been given any side or down thrust, and this has proved quite satisfactory.

Construction: The wing on this type of model must be capable of standing up to fairly high stresses, due to the speed, although possibly the most severe loading is caused through the model turning over on its back after landing. This is bound to happen when flying over rough ground or in windy weather. The result of this is a sharp blow in the centre of the spar; this is often forgotten when designing a model and is not remembered until the damage has been caused. In designing the main spar it should be borne in mind that the strength at the tips need only be slight to that of the centre section. The width of the spar, therefore, can be reduced towards the tips. In this case it was done by having the inner section 1/8 in wide and the outer 1/16 in wide, the centre being reinforced with 1 mm. ply. It should also be noted that a much stronger structure will be obtained if all the parts are given a coat of cement and allowed to dry before finally cementing together.

The fuselage is built up on the 'X' type of structure as used by Leon Shulman on his Banshee (oz1192). It has the advantage of being simple and quick to build, and ensures correct alignment of the wing and stabilizer while giving a clean and well streamlined fuselage. I mounted the engine on beams and not, as has been general in this country, a detachable mounting. This was done to minimise vibration. Bearing in mind the possibility of a crash, aluminium tubes were used for the engine bearers; these bend if any severe load is implied to the engine.

The undercarriage also is slightly different, attachment being rigid and fitted direct to the engine bearers. Any heavy landing therefore is transmitted onto the bearers where the weight is fixed; ie engine, and not as in most cases to the balsa structure.

Fuselage: First of all reproduce the fuselage outline on a sheet of 3/32 medium grain balsa. Cut out the outline and lightening holes as required. Two or three sheets can be cemented together to give the required size. Next, cut the plan outline from 3/32nd sheet and cement to side elevation. Formers for the wing mount and the triangular gussets are now fitted. The wing platform is made from 1/16 in medium hard sheet, the grain running fore and aft. Fit paper tubes to take fin dowels, dowelling for wing and stabilizer retaining bands and 22 swg piano wire skid to tail.

Lastly, attach flight timer in fuselage. A small door can be made to give access to timer valve.

Wing: Cut ribs, as shown on drawing, from soft medium 1/16 in sheet balsa. The main spar is built up in sections from 1/16 in medium hard straight balsa and reinforced in centre with 1 mm ply. Care should be taken when fitting ribs next to spar..."

Plan and article thanks to BrianCox. Model photos thanks to Gino.

Quote: "Thank you both for such a great website. Hope you can use this plan. Dizzy Diesel [Gino]"

Update 13/04/2021: Replaced this plan with a clearer copy (patterned background removed) thanks to Circlip. 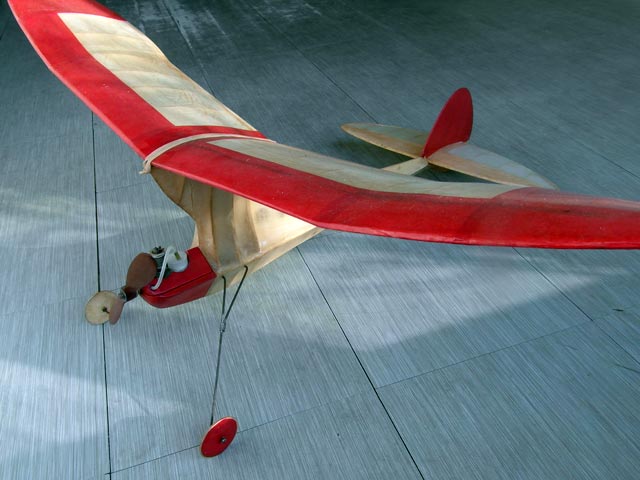