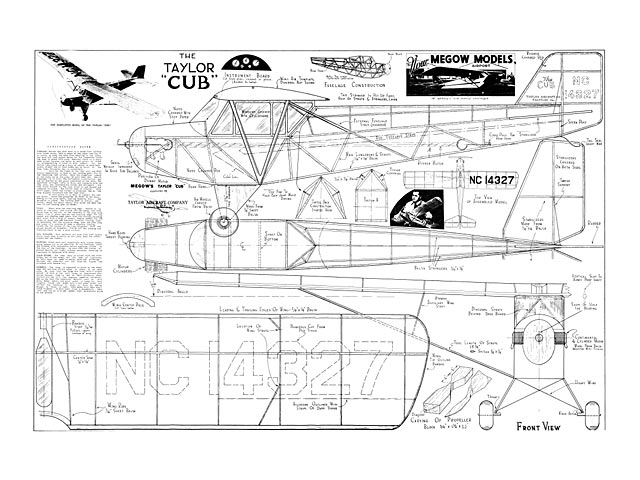 Quote: "Contruction Notes: Fasten the plan down to a large flat surface with thumb tacks. Take a sheet of wax paper and lay it in place, to keep the work from adhering to the plan.

Fuselage: Lay down 1/8 inch square balsa for the longerons, holding them in place with pins. Wherever there is a sharp bend either moisten the balsa at that point, or crack it, strengthening it later on with cement. Fit the struts into place using a drop of cement to hold each joint, either one or hoth sides may be built at the same time, whichever way is convenient.

Join the two sides at the rear post and with struts immediately in back of the landing gear. Fit in the remaining rear struts. Bend the longerons inward at the nose, as onthe plan. Be sure that the entire fuselage, is in line. The turtleback construction may now be started at the point indicated on the pian. The uppermost stringer rests on this, and connects with the rear post, the intermediate struts and stringers are then built around it.

The nose block is now shaped and cemented in place. The entire nose is covered with stiff paper, after the former is attached. Add on the wing support structure and the rear hook.

At this point it is well to install the rubber motor. Carve the propeller as shown on the plan, adding on the prop shaft, bearing washers, etc, and assemble in place. The landing gear is simple, yet sturdy. Shape the donut wheels from balsa and make the rest of the landing year as shown

Wings: Start with the trailing edge. Fasten it in place on the plan. Now finish off the ready cut ribs, which come in the kit, to the template in the side view. Cement ribs in place against the trailing edge. Fit the center and leading edge spars into the notches, touching each joint with a drop of cement. Fasten bamboo tip out-lines in place and add whatever internal bracing that is necessary. For the opposite wing, turn the plan oven and trace its outline or make a separate tracing. Cement the two halves of the wing together with the proper awount of dihedral... " 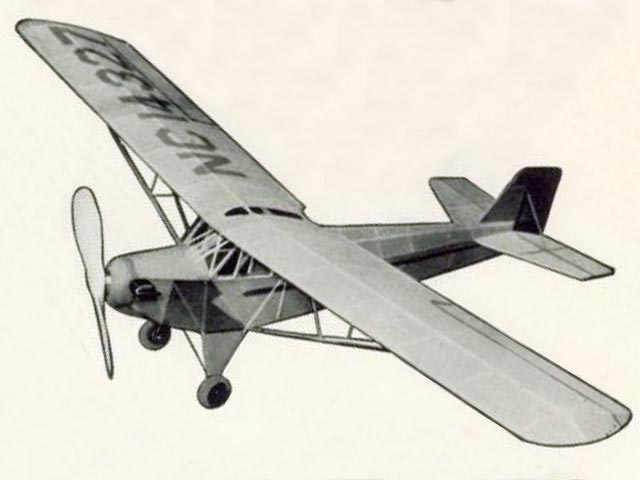