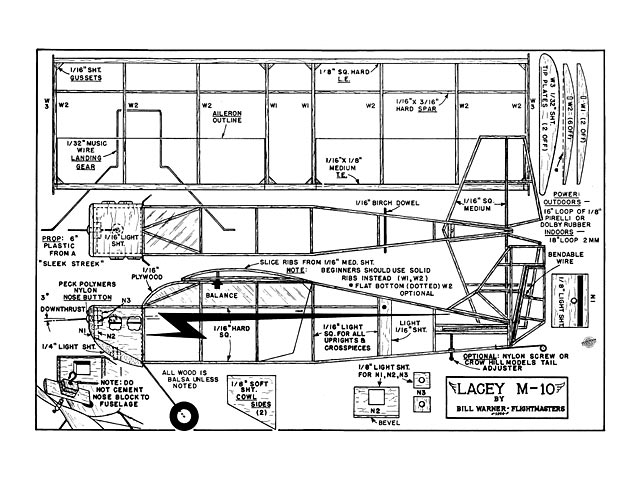 Quote: "The Ugly Peanut. Ugly at first sight! When are you going to take it out of the crate? Why don't you paint it green so you can hide it in the grass? You can imagine the ribbing that homebuilt designer Joe Lacey must have to take about his M-10. Personally, I have never seen an uglier airplane, unless, of course, jets qualify. Neither have I ever seen such genius and mastery of utter simplicity in a homebuilt ship.

Lacey made the M-10 for the explicit purpose of demonstrating that anyone can, if he wants to, build a very flyable and useful airplane. His prototype is simple, tough, and suited for towing behind a VW Bug with the wing (which can take 9 Gs) pivoted 90° on top of the box fuselage. It weighs only 638 lb, will fly 1,000 miles on 47 gallons of gas, will do 40 mph with the nose up and 150 with it down! The plane is equipped with dual controls, a Continental C-90 engine, and - with the second seat removed - sleeps one! Joe built the original in only 400 hours. And would you believe that he even sells the plans for eight bucks? If you try real hard, you can spend more than that for some model plans!

If you're not really into scale, or at least rubber scale, you might ask your-self why anyone would want to build anything other than a P-38 or Barling Bomber. A fair question. To an enthusiast hung up on the 8D-5/Lear Jet school of design, I can only say: Forget it! For someone who appreciates a plane which can be built quickly and flies magnificently, the question of 'why' never enters into the equation.

Most of the problems which plague the Peanut Scaler already have been solved by the original design. I know of no other Peanut model which incorporates a finer balance of desirable characteristics: a wing area approaching 40 sq in, a high wing which mounts easily on top of the fuselage, a wing which can easily be built in one piece, super-strong nose with indestructible landing gear, no drag-producing wing struts, a perfect box of a fuselage, windscreen with no compound curves, and quite decent moments allowing the ship to be trimmed for flight with addition of little or no nose ballast.

All in all, the Lacey is the perfect ship for the beginner in Peanut Scale. As far as the proof of the pudding goes, the model turned top time indoors under a 15-ft ceiling at the 1974 Vegas Vultures Peanut Annual at 39 sec. RUG, and has done 2:19 outdoors, with many flights over a minute. The only recommendation as to modifications I would make to builders who will be flying outdoors in winds over 5-10 mph might be to add about 3/4 in of dihedral on each side. " 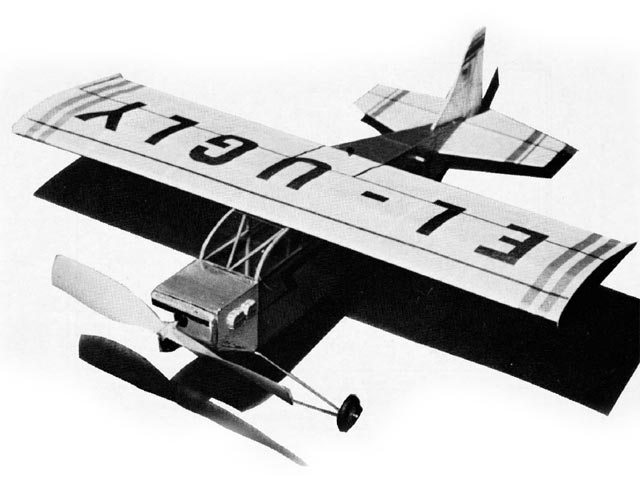 Honest and descriptive article. The designer took special care to locate a correct reg code to go with his description, even if I'm having trouble locating the national code EL-. The second part of the code seems fine though.
Miguel - 31/03/2021
Add a comment